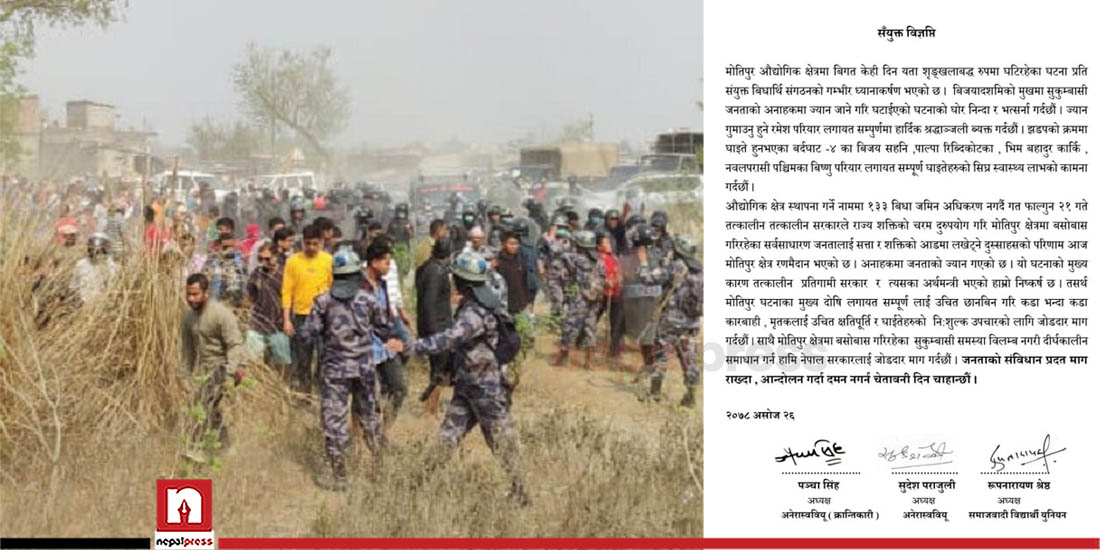 KATHMANDU: Student unions close to ruling parties have expressed their serious concern over the death of four people in Motipur Industrial Area in Rupandehi.

Issuing a joint statement on Tuesday, students unions of CPN (Maoist Centre), CPN (Unified Socialist) and Janata Samajabadi Party-Nepal (JSP-N) demanded that the government investigate the Motipur incident as soon as possible and punish the guilty.

The student unions warned the government not to suppress the protest of the people.

The student unions have blamed the erstwhile government led by CPN-UML for the incident. They said that the incident occurred after the UML-led government acquired 133 bigha land in the name of constructing industrial area.

“Motipur has become a battlefield today as a result of the then government’s move to remove the local people living in Motipur area by misusing the power,” the statement read, adding, “The main reason behind the incident is the then regressive government and its Finance Minister.”

Earlier on October 11, Home Minister Bal Kumar Khand had directed the concerned authorities to protect the land of Motipur Industrial Area from the encroachers.

Four persons died and more than a dozen people were injured in police firing after squatters clashed with police at Rupandehi’s Motipur Industrial Area on Sunday.

As many as 16 local people and 49 security personnel were injured in the incident. Of the injured, four police personnel have been sent to Kathmandu for further treatment.