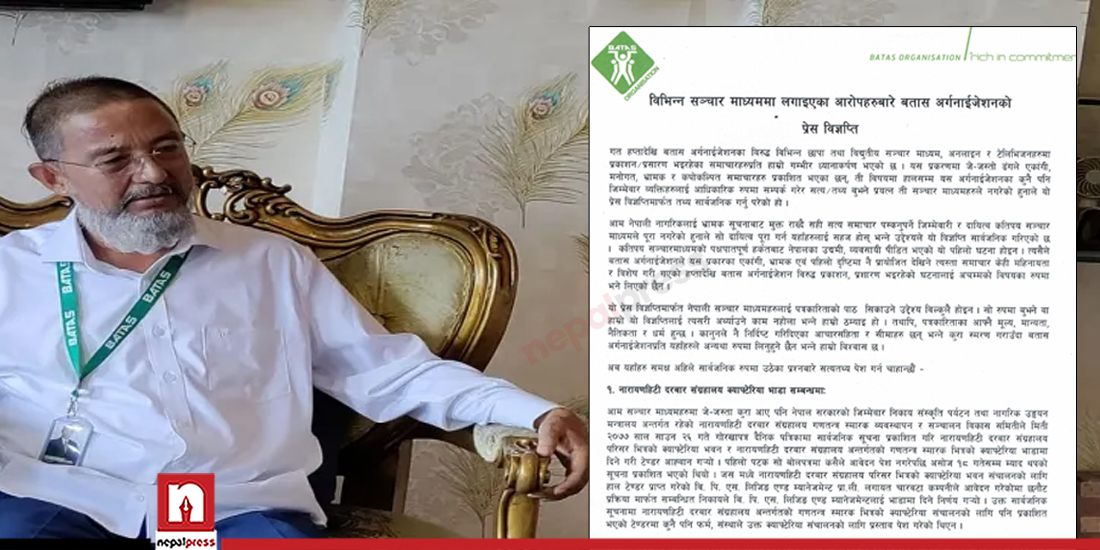 KATHMANDU: The Batas Company has challenged the government to scrap all the agreements with proper compensation of the investment.

Issuing a seven-point statement on Wednesday, the company denied all the allegations of the media saying that they have good relationships with high-ranking officials of the country.

The statement claimed that the media was just trying to tarnish the image of the company.

“This is not the first time that the industrialists and entrepreneurs have become the victims of the biased behavior of some of the media agencies,” the company said.

The Batas company has been saying that they were awarded with the tender to construct a restaurant and other infrastructure on the premises of the Narayanhiti Durbar Museum in a legal way.

The company signed a contract with the government to build a restaurant and other structures on January 1, 2021.

Also Read: “I have support of PM Deuba and Oli to take action against Batas Company”

The company said it had got the contract to operate a cafeteria on the premises of the museum for three years with very strict conditions and had a plan to invest Rs 50 million in the project. The government demolished all the infrastructure at a time when the company had already invested over Rs 30 million, the statement read.

“We would like to request you all to inform all the general public about the injustices and crimes the government had committed against us at that time,” the statement further stated.

The company came to light after Minister of Culture, Tourism and Civil Aviation Prem Bahadur Ale directed the concerned authorities to stop the construction of a restaurant on the premises of Narayanhiti Durbar Museum.

Similarly, the company claimed that they have not done anything wrong regarding the Nepal-India Friendship Pashupati Dharamshala.

The company was selected by registering an application in the tender published by the Pashupati Development Trust on January 23, 2019, the statement read.