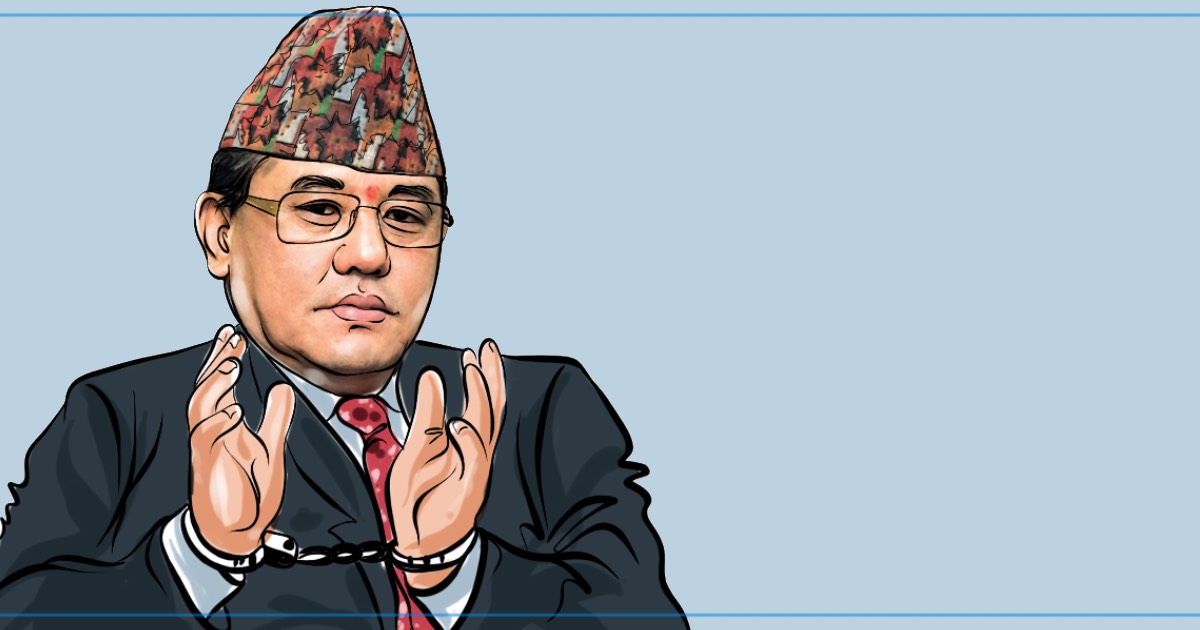 Various complaints had been filed at the Metropolitan Police Range, Kathmandu against Tamang for his alleged involvement in misappropriating Rs 700 million from Civil Saving and Credit Cooperatives. Ltd. Tamang is also the chairman of the cooperatives.

But, he had been evading the arrest due to his connection with the political leaders.

Victims have accused that Tamang, who was also a member of the Constitution Assembly from CPN-UML, embezzled the money by showing the power of political leaders.

DIG Dhir Pratap Singh, Chief of the CIB said that Tamang was arrested for embezzling the money deposited by the people in Civil Saving and Credit Cooperatives. Ltd.

Out of Rs 8 billion deposited in the cooperatives, Tamang had invested Rs 7.5 billion alone in the Civil Homes.

It has been learnt that he had invested millions of rupees by putting his house, swimming pool, club, park and even the central office of cooperatives as collateral in the bank.

According to a new Cooperative Act and regulation, police cannot arrest an operator of the cooperatives without the permission of the Ministry of Land Management, Cooperatives and Poverty Alleviation.

Police said that 12 persons including former Chairman of the Civil Saving and Credit Cooperatives Tamang, incumbent Chairman Shrestha and other members of the cooperatives have been arrested at the directive of the Ministry.

Police said that they are searching for 28 former staffers of the cooperatives Tamang had appointed after 2006.

Rise of Ichchha Raj Tamang and his black deeds

Tamang had returned home after completing a Civil Engineering course from Russia in 1998. After returning from Russia, he started teaching at the Pulchowk Engineering Campus temporarily. In the meantime, he was appointed as the Chairman of the Satdobato-based Gorkha Saving and Credit Cooperatives Ltd in Lalitpur.

He was appointed as the Chairman of the cooperatives by his son-in-law Dambar Bahadur Bamjon.

Tamang started to invest in Civil Homes by embezzling the money of the Gorkha Cooperatives when he was the chairman of the cooperatives.

Civil Saving and Credit Cooperative Ltd managed to gain a profit of Rs 40 million in the fiscal year 2000/2001.

Then he started thinking of investing the deposited money of Civil Saving and Credit Cooperative Ltd in Civil Homes by violating the rules of the cooperatives.

When Tamang floated the proposal at the operating committee of the cooperatives, the company divided into two groups.

After the dispute surfaced between the two groups, Tamang’s group barred the opposing group from entering the Soaltee Hotel to attend the general convention of the cooperatives in 2009.

The general convention as per the decision of the executive committee also decided to scrap the membership of the opposing group.

Albeit, Tamang got the permission to build 96 houses, he constructed 27 more houses against the law and sold 123 houses.

The group of customers “Welfare Society of Civil Home Phase Two” moved the High Court against Tamang after they did not find the facilities as promised in the brochure. The Welfare Society won the case.

After being dejected from losing the case, Tamang then moved the Supreme Court seeking legal remedy. The apex court, however, upheld the decision of the High Court.

Though the Supreme Court issued a directive in the name of Tamang to immediately transfer the sold houses in the name of customers, it could not happen due to lack of law.

As the apex court’s directive could not be implemented, the ownership of houses has not been transferred in the names of people, who bought the houses in the second phase, yet.

He took millions of rupees in loan by putting the sold houses, park, clubs and swimming among others as collateral from the Civil Cooperatives Ltd.

Likewise, he took Rs 40 million and Rs 80 million in loans by putting the houses constructed in second phase and third phase from the National Cooperative Bank.

A member of the Civil Homes said that the National Cooperative Bank bank issued the loan at the direction of Tamang without carrying out the property valuation.

Around 300 victims by forming the Welfare Society had been struggling against Tamang. But, Tamang had been turning a blind eye to their struggle by misusing the power.

Though Tamang and his wife have over 51 percent share in the Civil Homes, he has been found using the property unilaterally.

According to a preliminary investigation, Tamang has also transferred all the property in the name of his wife with whom he has already got the divorce.

It has been learnt that Tamang was appointed as the Chairman of the Civil Bank on the basis of political connection.

It has to be noted that the Civil Bank is a bank that has not been able to make profit as per its capacity.