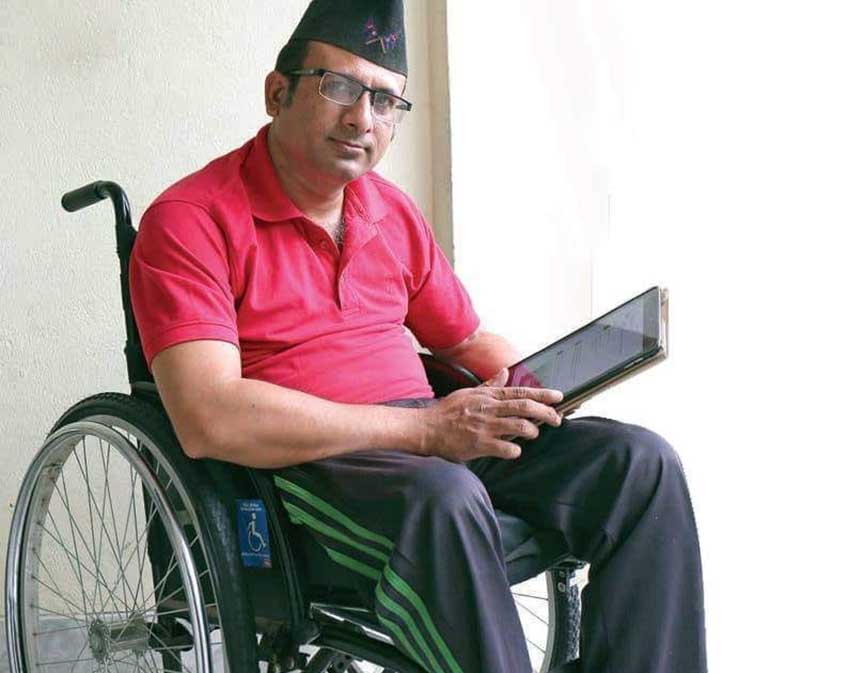 KATHMANDU : Gajendra Budhathoki made headlines in recent weeks. It was a story of Nepal-based Coca-Cola Company threatening him for his investigative tax avoidance stories of the company in Takshar, an economic magazine. It came into public domain that the company had made a formal decision to attack Budhathoki in collaboration with some of its trade union leaders.

Noted economic journalist Budhathoki has been awarded with various journalistic awards and accolades. He obtained the Nepal Press Institute prize in 1939 AD. In 2004 AD, he got ‘Development Asia Journalism’ Award from Asian Development Bank Institute. Again, in 2016 AD, he was honoured by the Nepal government with the National Journalism Award. He has numerous honours, medals and awards to his credit.

He has authored some noted books, including ’20 Years of Economic Linearization’, ‘Contemporary Nepalese Economy’ and ‘Corona Impact in Economy’. He is also Nepal’s first wheelchair-bound news editor. The road mishap that took place on September 24, 2008 confined him to a wheel chair.

He is also a part of a soon-to-be-released survey on accessible tourism titled ‘A Survey on Accessibility for Persons with Disabilities in Nepal’s Hotels.’ The accessible hotels survey report was prepared by IFC, in partnership with the Society of Economic Journalists—Nepal (SEJON) and the National Federation of the Disabled—Nepal (NFDN). The survey was  carried out in the months of February and March of 2021 covering 85 hotels across the country.

Of late, he has been an activist and researcher of accessible tourism. ”I was a part of Nepal’s accessible tourism related committee formed by the then Minister of Tourism and Civil Aviation Rabindra Adhikari”, said Budhathoki, ”However, Adhikari breathed his last in a helicopter accident in Taplejung. After his demise, this committee was not left in limbo.”

In the autumn trekking season of 2016, Budhathoki became Nepal’s first wheelchair-bound trekker in Nepal’s famous Annapurna Base Camp (ABC) trek. ”I was not thinking about the trek but my fellow journalist from France Dadi Sapkota approached me with this beautiful trekking plan”, shared Budhathoki, ”I agreed to the plan after Sapkota assured me of all possible support.” Budhathoki was on the trek together with a physically challenged 11-year-old boy from Switzerland. The boy suffered from Cerebral Palsy. Budhathoki is troubled by a spinal cord injury.

The name of the trek was given as ‘Doko Trek’ as Budhathoki and his fellow Swiss boy were carried on a Doko (traditional Nepalese bamboo basket). Budhathoki, his 13-year-old son Suyog and the trekking team left for the Doko Trek on October 19, 2016 from Kathmandu. They flew to Pokhara and reached Kimche, from where their trek started, after an hour drive. Krishna Lama, Bharat Thapa and Ramesh Bhandari helped Budhathoki during the trek. The 10-day-long Doko Trek was the lifetime experience for Budhathoki.

”Doko Trek boosted me morally. I had never thought that I would be able to travel without my wheelchair. I witnessed different kinds of problems when I went to Udayapur to perform the last rites of my mother around ten months ago”, said Budhathoki.

Interestingly, just after a year, the United Nations 70th General Assembly declared the year 2017 as the ‘International Year of Sustainable Tourism for Development’. This tourism year talked about accessible tourism which Budhathoki had already experienced in his life.

”When I was a part of Nepal’s first Doko Trek, people did not talk much about the accessible tourism”,Budhathoki said.

Just a year after his trek, UN inspired all stakeholders to talk and act on the accessible tourism which gave him an immense pleasure, he added.

In 2018 the then tourism minister Rabindra Adhikari inaugurated the three-kilometer-long Nepal’s first trek in Pokhara. The trek started from Kaskikot and ended in Naundanda. The trail was designed for the people who travel to Pokhara on vehicles. They will travel again on vehicles to Sarangkot for sunrise and from Sarangkot to Kaskikot.

Five years have already been passed after the trek but nothing much has happened in the accessible tourism sector in Nepal. ”We could do more in accessible tourism. But, none of the concerned authority cares about it”, Budhathoki said. He said that this is  not only about the  government but the general public should also give attention towards the issue.

”We don’t have public infrastructures like roads, public toilets and shopping malls among others accessible to physically challenged people”, Budhathoki said, ”Even government buildings are not differently -abled friendly.”

Budhathoki cites World Health Organization’s data that there are one billion people in the world with some sort of disability and says the spending of physically challenged travelers is almost one and half times higher than general travelers. For this, Budhathoki says, accessible tourism is not just the responsibility of stakeholders but also the scope of new businesses.