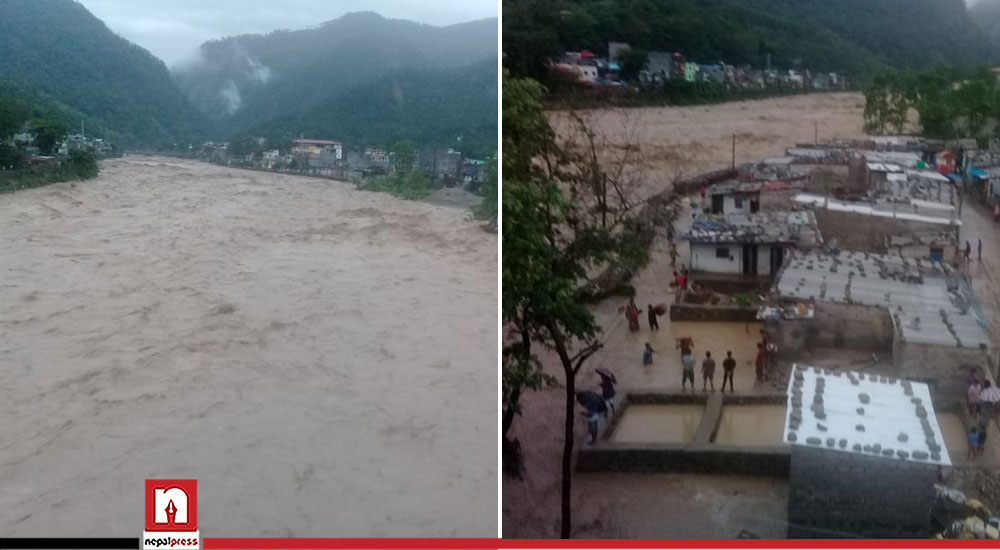 RUPANDEHI: The landslide that occured after three days of continuous rain has blocked the roads leading to the district headquarters of six hilly districts of Lumbini province. The east-west highway in Rupandehi, which was blocked yesterday, will not be reopened today.

The province police office said many roads in Lumbini were blocked due to the floods. Roads to most of the hilly areas of the province have been cut off and access roads have been inundated. All the roads connecting Palpa, Gulmi, Arghakhanchi, Pyuthan, Rolpa and Rukum connected to the highway have been closed due to landslides.

The flooded road near Devadaha of the Butwal-Narayangadh section of the East-West Highway, which has been closed since Tuesday afternoon, has not been reopened till today.

According to the Road Division Office, Butwal, alternative roads could not be constructed due to continuous rain.

Similarly, landslides have occurred in at least half a dozen places in the Butwal Palpa section of Siddhartha Highway while the Bartung Ramdi section, Tansen Ridi, Ridi Tamghas and Ridi Wamitaksar sections have also been closed.

According to DSP Dilli Narayan Pandey, spokesperson at the Province Traffic Police Office, Butwal, the road has been blocked due to landslides at Tinau 5 Kalimati, Gauda Bridge of Tansen, Jarepipal of Tansen 8 and Gaighat of Tansen 14. According to Pandey, a landslide has also hit Harthok of Ribdikot and Malmul of Ribdikot. Meanwhile, roads have been blocked in Palpa, Rampur, Purbakhola-1, Lumchap, Ramba-4, Humin, Sera of Bagraskali and other areas due to landslides.

DSP Pandey said that the road connection with Rolpa and Pyuthan was cut off when the road was closed at Garmasinghe Sandhikharka Road, Kapilvastu, Phudwang, Pyuthan Bhaluwang Road, Sarmarani 4 Kharekhola. He informed that the Segment of the highway west of Butwal is running smoothly.

Nakul Shahi, a people’s representative, said that tens of houses were relocated after the floods in Rupandehi’s Tinau River overflowed. He said that many houses in Butwal Ward No. 11 were shifted to safer places on Tuesday night. Dozens of houses in the area have been inundated by the floods.

Chief Shivaraj Subedi said that the sub-metropolis has been appealing to the public since Tuesday and a team of police and scouts has been deployed in various places.