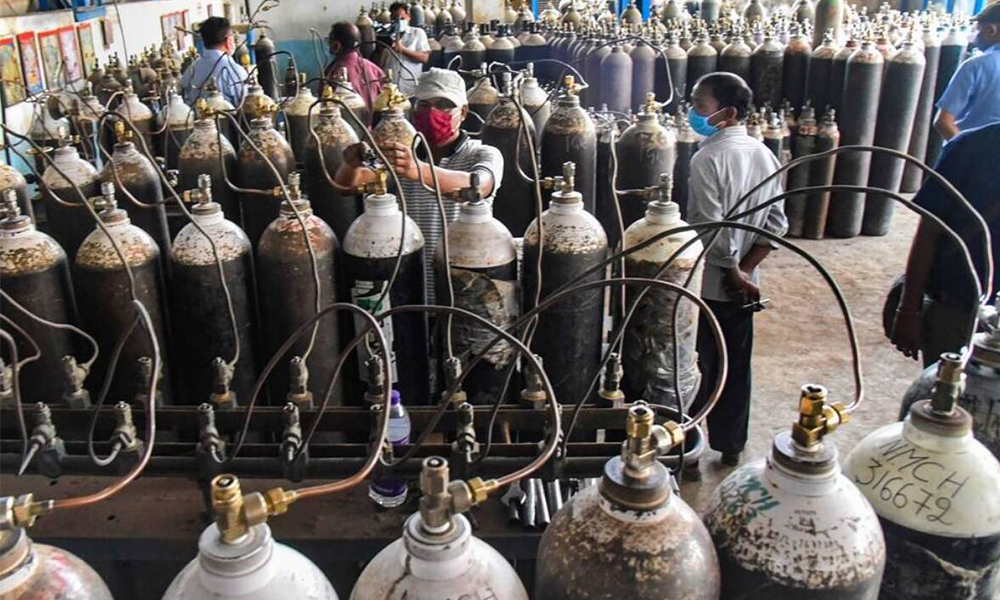 RUPANDEHI: One month ago in Rupandehi, not only was the treatment of covid infected affected due to lack of oxygen, but nine people also died. Oxygen management was a challenge for the hospitals, administration, and people’s representatives.

Patients with respiratory problems due to the infection could not get a bed in the hospitals and they would be sitting everywhere on the floor or the balcony. The relatives of the sick used to roam around in search of oxygen, and a lot of conflicts arose as they started fighting for the available oxygen. Relatives lined up at the oxygen-producing plant day and night. The hospital and the local administration had a hard time managing oxygen. Lately, however, this problem has died down. The oxygen from here is being exported to other districts as well.

Chief District Officer Asman Tamang said that the supply of oxygen is more convenient due to various reasons like the reduction in the need for oxygen, production from liquid tanks imported from India, and management of security forces at the oxygen-producing plants.

Earlier, oxygen was supplied to Rupandehi by airlift from outside the district as the local production was not enough. Three industries in the district have been producing oxygen. The daily capacity of the three industries is 1100 oxygen cylinders. After bringing liquid oxygen from India, the capacity has increased to 1400. Earlier, 1700 cylinders were consumed daily, but now it is only 800. The COVID Hospital and the 246-bed isolation center built by all 16 localities have sufficient oxygen. Oxygen produced in the district has also been made available in eight other districts. Hospitals that had stopped the treatment of infected due to lack of oxygen have also started admitting patients.

Experts warn that the third and fourth wave of infections could occur and the situation could become worse even if the hospitals have a sufficient supply of oxygen right now. This means that there is a possibility of the risk of death due to a lack of oxygen and beds. Therefore, administrative and logistical work should not be postponed just because there is enough oxygen now.

Chief District Officer of Rupandehi Asman Tamang said that there was no shortage of oxygen in the district. The local level of Rupandehi has set up an isolation center of 246 beds. Dr. Rajendra Giri, head of the health office in Rupandehi, said that the pressure of COVID patients who needed oxygen in one day in Rupandehi during the second phase of infection had reached more than 400 patients at the hospital, which has now decreased.

But due to power outage and plant breakdown, production was not up to capacity. This has started to increase after Shankar Oxygen Gas started importing liquid oxygen tanks from India. The plant has imported 3,500 cylinders of oxygen in three tanks in the last week alone. Not all of them have been used. Even now, there is enough oxygen to fill 1,300 cylinders, but there is a lack of empty cylinders.