Support of Chinese Communist Party to Nepal’s parties against the pandemic, what did leaders say in the virtual meeting? 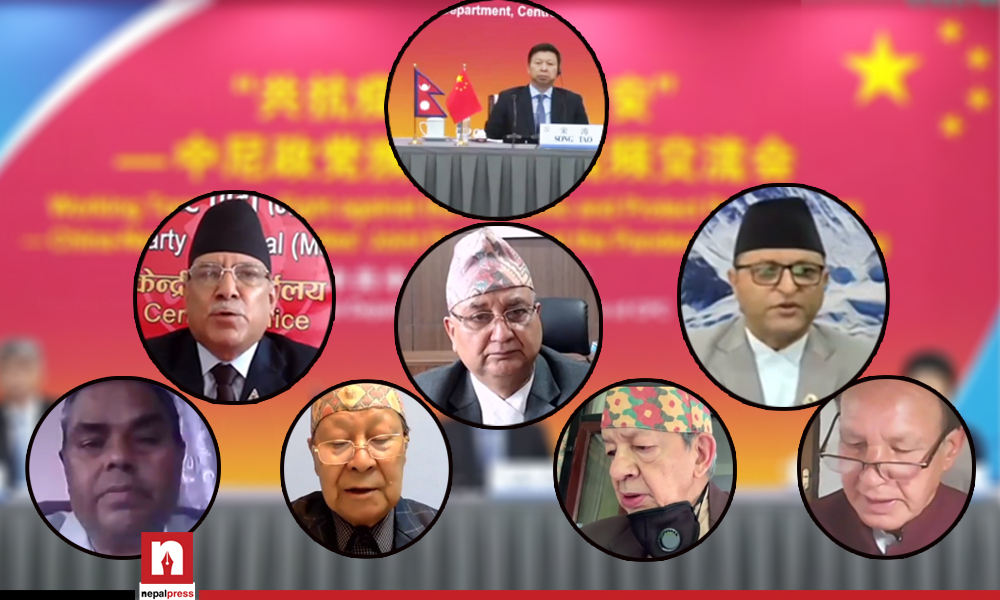 KATHMANDU: The Communist Party of China (CCP) and Nepal’s political parties and parliamentary officials held a virtual discussion on Wednesday on the latest status of the coronavirus pandemic in Nepal and measures to prevent it.

CPC Minister Song Tao delivered a keynote speech at an online discussion chaired by Chen Zhou, Deputy Head of the Foreign Department of the Communist Party of China (CPC).

From this virtual session, China has announced to provide hydrogen oxygen generators to Nepali political parties according to their status and size to fight the pandemic.

Pokharel, who is also the Deputy Prime Minister and a member of the Board of Directors of the COVID Crisis Management Center (CCMC), urged China to coordinate vaccine supplies. Stating that only unity, partnership and friendly relations can control the epidemic, Pokharel said it was time to defeat the virus and move towards economic recovery.

He said that the two countries should work together for the development of the Himalayan border. Recalling the agreements reached with China when he was Prime Minister, Dahal said it was important to implement past agreements. He also said that Nepal is committed to the One-China policy.

Congress Foreign Affairs Chief Narayan Khadka said that the CPC and the Congress have had a special relationship since BP Koirala’s visit to China in 1960. Noting that there is a party relationship between the Congress and the CPC, he expects continued Chinese support. Stating that Nepal was going through a difficult time due to the pandemic, he thanked the Chinese government for its assistance.

Chairman of the People’s Socialist Party Upendra Yadav urged China to give priority to Nepal in the supply of vaccines. Yadav said China’s role in controlling the pandemic was exemplary for the world.

Stating that the situation in Nepal has become very complicated, RPP Chairman Pashupati Shamsher Jabara said that Nepal should also be in a state of readiness for the third wave. Stating that there is a lack of nursing and medical colleges in Nepal, he also thanked the Chinese government for its continued support against the pandemic.

Chairman of the National Assembly Ganesh Timalsina said that the world, including Nepal, should learn from the Chinese model to fight against the pandemic.

He praised China’s worldwide support against the pandemic. President Timalsina said that China has led the world in human welfare. He also thanked the Chinese government for providing life-saving health care to Nepal.

A team of Chinese doctors participated in the online meeting to teach Nepali experts how to operate a hydrogen oxygen generator. The device, which is widely used in China to prevent viral infections, is expected to save many lives in Nepal.

The oxygen generator developed by China is different from the traditional ones and its efficiency is also said to be higher.