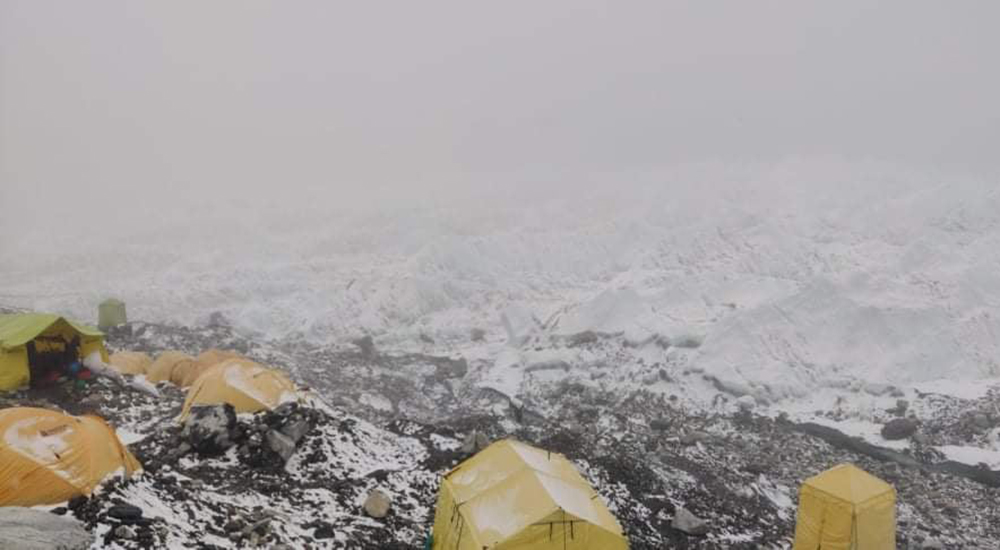 ITAHARI: Heavy snowfall has been reported in the Everest region since Tuesday.

Due to the snowfall, the schedule of all the expeditions from the base camp to the peak of Everest have been postponed. According to Khim Lal Gautam, a liaison officer at the Everest Base Camp, the teams that had been heading towards the summit have also climbed down.

Gautam said that the summit team came to Camp Two and stayed there. He also informed that there were more than three dozen climbers and Sherpa assistants that returned to Camp Two.

According to Gautam, the teams that were climbing Mt. Everest via companies like Alpine Association and Peak Promotion have returned to Camp Two. He says, “The environment is currently unfavorable for the summit.”

Similarly, Aditya Karki, Coordinator of the Nepal Army’s ‘Safa Himal 2021’ campaign at the Everest base camp, told Nepal Press that the weather in the Everest region has been unfavorable since yesterday.

Karki also said that it was forbidden to move from one tent to another as they are aware of the possible impact of COVID-19. He said, “The Safa Himal team has worked while wearing PPE.”

The low-pressure system developed from the Bay of Bengal in the Middle East has now turned into ‘Cyclone Yaas’. The weather forecast department under the Department of Water and Meteorology has projected that this turned into a powerful cyclone from Tuesday and will become more powerful by Wednesday as it moves north-northwest.