Catastrophic conditions arising in the pandemic

COVID-19 in the Far West: Lives being lost due to lack of timely treatment 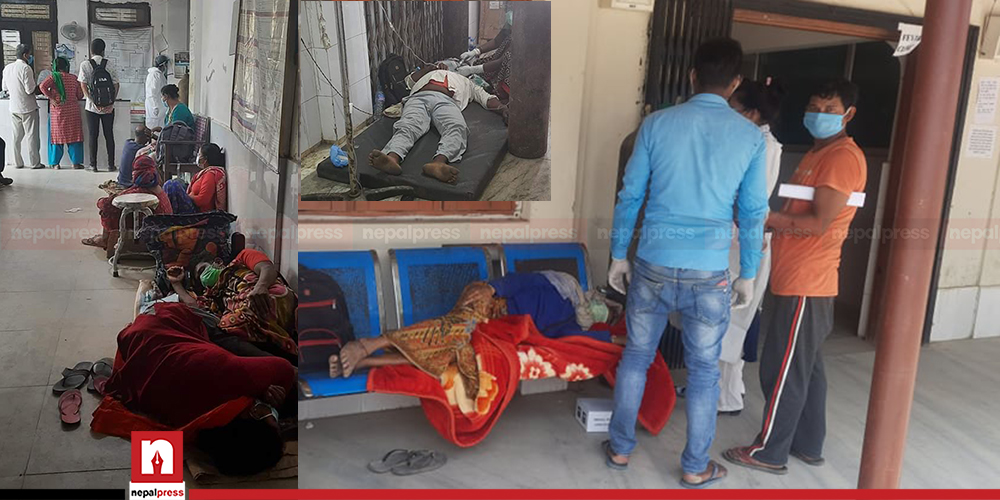 A COVID-infected man died on Monday after being rushed to Tikapur Hospital in Kailali. Of the infected people being treated at Tikapur Hospital, 10 have died in the last two days.

13 people have been admitted to COVID-19 High-Dependency Unit (HDU) in the hospital. 35 suspected as infected are under medical surveillance. As there is a shortage of beds, they are being treated in the courtyard outside the hospital.

Chairman of the Hospital Development Committee Deepak Rawal says, “The infection has spread in the community. It is becoming difficult to save severely infected people.”

With the increase in the number of infected people, there is a shortage of oxygen in Tikapur Hospital. “Until now, we have been working as usual, but now we are running out of oxygen,” he said.

Dhangadhi has the only privately owned oxygen industry. Although the industry has the capacity to produce 200 cylinders of gas daily, it is barely producing up to 150 cylinders.

The ICU and ventilator at Tikapur Hospital are out of use while the patients are dying. The ICU with 7 ventilators is unused due to lack of anesthesia and physicians.

The hospital has been demanding anesthesia and physicians for a long time but due to lack of arrangements, the COVID infected, who should be admitted to the ICU for treatment, are losing their lives due to lack of treatment.

Chairman Rawal complained that people were losing their lives due to a lack of manpower to use the infrastructure in the hospital.

A 40-year-old man of Patan Municipality-4 of Baitadi died due to a COVID infection on Friday.  He died on the way to Dhangadhi. He was traveling to Dhangadhi for further treatment.

The hospital does not have an ICU and ventilator. “His life could have been saved if we had had an ICU and a ventilator,” said a hospital health worker. 4 people have so far died in the district from the second wave of COVID. Chief of the Health Office, Yogesh Prasad Bhatta, admitted that the condition of treatment resources in the district was worrying at a time when the number of COVID infected and deaths were increasing.

Binod Kumar Bika, Ward Chairman of Bajura’s Badimalika Municipality-9, who was unwell for a week, went to the district hospital on Saturday. He was diagnosed with a COVID infection on Saturday. By that time, his condition had become critical. An immediate ventilator was needed. However, the hospital did not have a ventilator.

The hospital suggested that he be taken to Dhangadhi, and the family members did the same. However, he died on the way to Dadeldhura for treatment.

“If we had a ventilator with oxygen, he would have survived,” said Chunamani Pant, a focal person at the district hospital.

It is not that the district hospital does not have equipment. But it is not being used. The hospital has stopped the ICU and ventilator saying that there is no manpower.

Two infected people of the district hospital also lost their lives on Monday morning. Now that the equipment in the hospital is out of use, there is a problem in treating infected people.

More than 10 people are dying every day in Sudurpaschim Province. This number has increased to 18 on Sunday. So far, 208 people have died of COVID infection in the province. More than 24,000 infections have been confirmed.

In such a situation, the ventilator and ICU beds provided by the Far-Western Provincial Government during the first phase of the COVID pandemic are still unused.

Health workers say that the risk is increasing due to the spread of infection in the community in Sudurpaschim where there is a shortage of specialist doctors. Most of the hospitals established with isolation wards do not even have a Consultant Physician and Critical Consultant Physician for the treatment of COVID-infected.

“Recently, the number of critical conditions and infections with symptoms has been increasing, which has caused a big problem,” said Senior Physician Dr Sher Bahadur Kamar, who works in Seti Provincial Hospital.

“Anticipating the complex situation after the outbreak in the community, management of the hospital needs to be improved by adding infrastructure, ICUs and ventilators,” he said

Government’s demand for return of equipment

The Ministry of Social Development of the Far Western Province has demanded the return of the unused ventilators in the hilly district hospital.

The ministry said that the ventilator which was not operational due to lack of manpower has been recalled for use in the treatment of the COVID infected.

Dr Jagdish Joi the chief of Hospital Development and Medical Division of Ministry of Social development told that a letter has been written to return the ventilator from the hospital which could not be operated due to lack of manpower.

We had given 10/10 bed ICUs and 2/2 ventilators to six district hospitals in the hills, but we have asked for them back as the equipment was not used there.

The district hospitals of Darchula, Baitadi, Achham, Doti, Bajhang and Bajura have 2-2 ventilators. Not all of them are in use. The hospital has stated that it could not operate the equipment due to a lack of necessary manpower.

At present, 10 ventilators are in operation at Seti Provincial Hospital, 7 at Tikapur Hospital, 6 at Mahakali Hospital and 6 at Dadeldhura Hospital.

A serious shortage of oxygen

Dhangadhi has the only privately run oxygen industry. Malika Oxygen Industries is currently producing up to 150 cylinders. This is the only cylinder needed by the Seti Provincial Hospital. However, the industry has to distribute to 9 districts only.

In such a situation, a lack of oxygen has been created in all the hospitals of the district.

Seti Hospital also has its own oxygen generation plant. 75 cylinders can be filled daily. However, the plant is not able to produce the required amount of oxygen. More than half of the oxygen needed in the hospital has to be brought from outside.

At present, the same oxygen is being given to two patients, said Dilip Kumar Shrestha, information officer of the hospital.

Isolation has been constructed in the building of Geta Medical College under construction in Geta, Kailali as the COVID infection is rising. But lack of oxygen and manpower is making it difficult to operate.

Lack of specialist doctors in Seti, no applications received

Seti is a referral hospital in the Sudurpaschim province. Most of the infected people of the province are being treated here. But, problems are arising due to limited equipment.

5 ventilators have been used for COVID-infected in the hospital.

The hospital has started adding human resources as the number of COVID infected has increased. However, no one has applied for the post of a specialist doctor.

Dilip Singh Saud, administration officer of the hospital, said that no applications were received for the 2 paediatricians, 3 physicians, 1 psychiatrist, 1 consultant medical generalist and 1 microbiology consultant called for.