‘Do we remove Oli or co-operate?’ Prachanda’s last question to Deuba and Mahantha 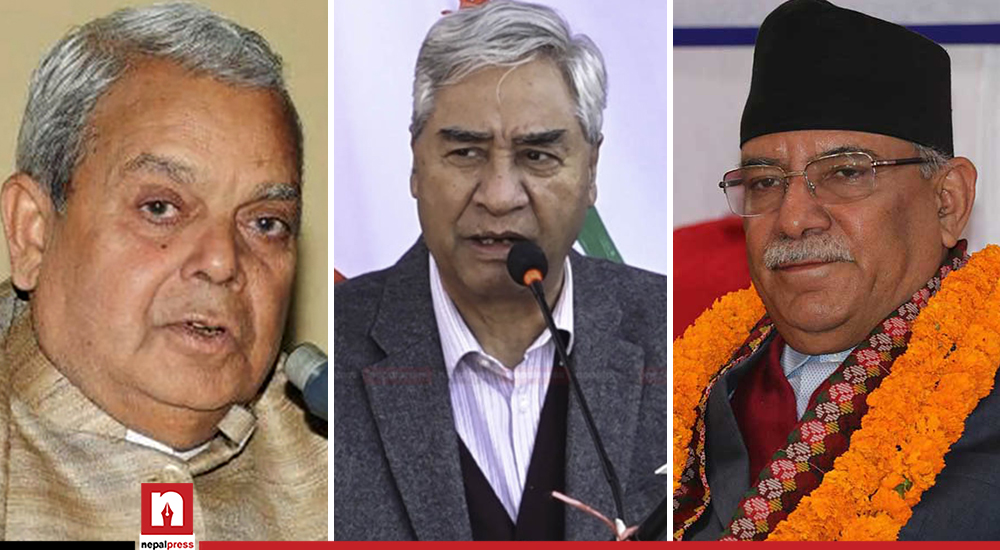 KATHMANDU: The CPN-Maoist Center is going to ask the main opposition Nepali Congress and People’s Socialist Party for the last time whether to retain the KP Oli government or remove Oli from power.

Despite the decision of Congress to form a government, it has so far refused to convene a meeting with the UCPN (Maoist). UCPN (M) spokesperson Narayan Kaji Shrestha said that although the decision taken by Congress was positive, Deuba had not taken the initiative to form a new government.

The Maoist centre, which has been ready to withdraw its support to the government after the Congress and People’s Socialist Party agreed to bring a no-confidence motion, has become frustrated in recent days. UCPN (M) Chairman Prachanda was enthusiastic after Congress decided to form a new government under his leadership demanding Oli’s resignation.

Despite the decision of Congress to form a government, it has so far refused to convene a meeting with the UCPN (Maoist). UCPN (M) spokesperson Narayan Kaji Shrestha said that although the decision taken by Congress was positive, Deuba had not taken the initiative to form a new government.

Shrestha said, ” what is the opinion of Congress president Deuba and PSP president Mahanta Thakur?” We are seeking their final decision. There have been provocations to provoke the government not to withdraw its support and to help KP Oli make another regression. ‘

Shrestha said that the UCPN (M) was ready to register the withdrawal of support within five minutes of the decision of Congress and JSP to overthrow the government. However, he said that withdrawing support without a clear picture of an alternative government would give Oli a chance to conspire further and lead the country to re-election.

Now  Maoists are going to ask Deuba and Thakur for the last time. If the Oli government is to be toppled, the Maoists will have to make a last-ditch decision to move forward with a no-confidence motion and to retain Oli.

A Maoist source said, “Deuba and Mahanta Thakur have finally shown signs of standing in line with Oli.” Even if they don’t bring a no-confidence motion, we have to withdraw our support and go to war against Oli. After we withdraw our support, Oli will be able to become the Prime Minister and declare elections as a major party in accordance with Article 76, Clause 3 of the Constitution. ‘

The Maoists have expressed serious concerns over Deuba’s failure to form a government. Although the party’s central working committee has decided to take the initiative to form a new government, the Maoists suspect that Deuba is not in favour of meeting Prachanda and is in favour of holding elections in November.

A Maoist leader said, “The UML’s Madhav Nepal faction is in the most difficult situation now. If Oli was removed, politics would have gone in the right direction and Madhav Nepal would have been given justice.” But Deuba and Mahanta seem to be under increasing pressure from inside and outside the country to join Oli. Now we ask Deuba one last time before making a political decision. ‘

After the UCPN (M) withdraws its support, Oli will immediately go for a vote of confidence or the President will proceed in accordance with Article 76, Clause 3 of the Constitution. UCPN-M spokesperson Shrestha said that they were moving ahead responsibly as they were in favour of ensuring the full term of the parliament

The UCPN (M) is in talks with Ram Chandra Poudel of the Congress and Baburam and Upendra of the PSP. But as Deuba and Mahanta are in the decisive position, the result has not come out. The Maoists are preparing to find a clear answer as to whether to throw Oli away for the last time and then join hands with all the forces within the party against Oli.

The leaders have taken the statement made by Mahanta Thakur’s side regarding the non-withdrawal of support given by the Maoists to the government as a ploy. Leaders say that the letter of withdrawal of support is still in Prachanda’s pocket saying that they have already dismissed the posts of elected parliamentarians belonging to Oli’s party.

A leader close to Prachanda said, “Deuba and Mahantha say we will not bring a no-confidence motion. In a minute, we will withdraw our support to the government and go for a new struggle against Oli.” In that situation, a new polarization begins to unite the anti-regression forces within Congress, PSP and UML. We can’t live in this situation anymore, we have to ask one last time. ‘