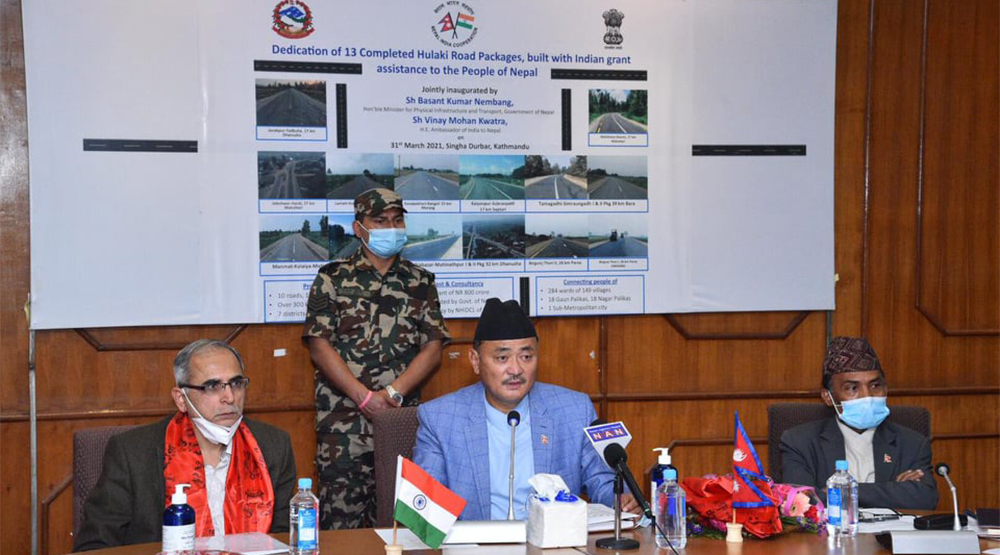 KATHMANDU: Construction of 13 out of 14 packages of the Postal Highway has been completed with assistance of Rs. 8 billion from the Government of India.

The completed roads have been jointly dedicated by Minister for Physical Infrastructure and Transport Basanta Nemwang and Indian Ambassador to Nepal Vinay Mohan Kwatra.

The Government of Nepal had identified ten much-needed roads as per the agreement reached between India and Nepal to upgrade the road infrastructure in the Terai region.

These roads, also known as the Postal Highway, connect the major cities along the East-West Highway with the Indo-Nepal border. This highway helps connect the people of Provinces 1, 2 and Lumbini with more than 284 wards, 149 villages, 18 village municipalities, one sub-metropolis and one metropolis.

A statement issued by the Indian Embassy in Nepal stated that the completed roads are in line with the criteria set by the Department of Roads. These roads have drains, footpaths with railings in residential areas, road signs and other road facilities. More than 652 culverts and more than 111 kilometres of drainage network have been constructed.

The Indian Embassy is confident that the construction of this project will help in upgrading the road infrastructure in the Terai region of Nepal and deepen ties between people of the two countries.

The construction of an inter-country railway from Jayanagar in India to Kurtha in Nepal has also been completed with the financial support of Government of India.