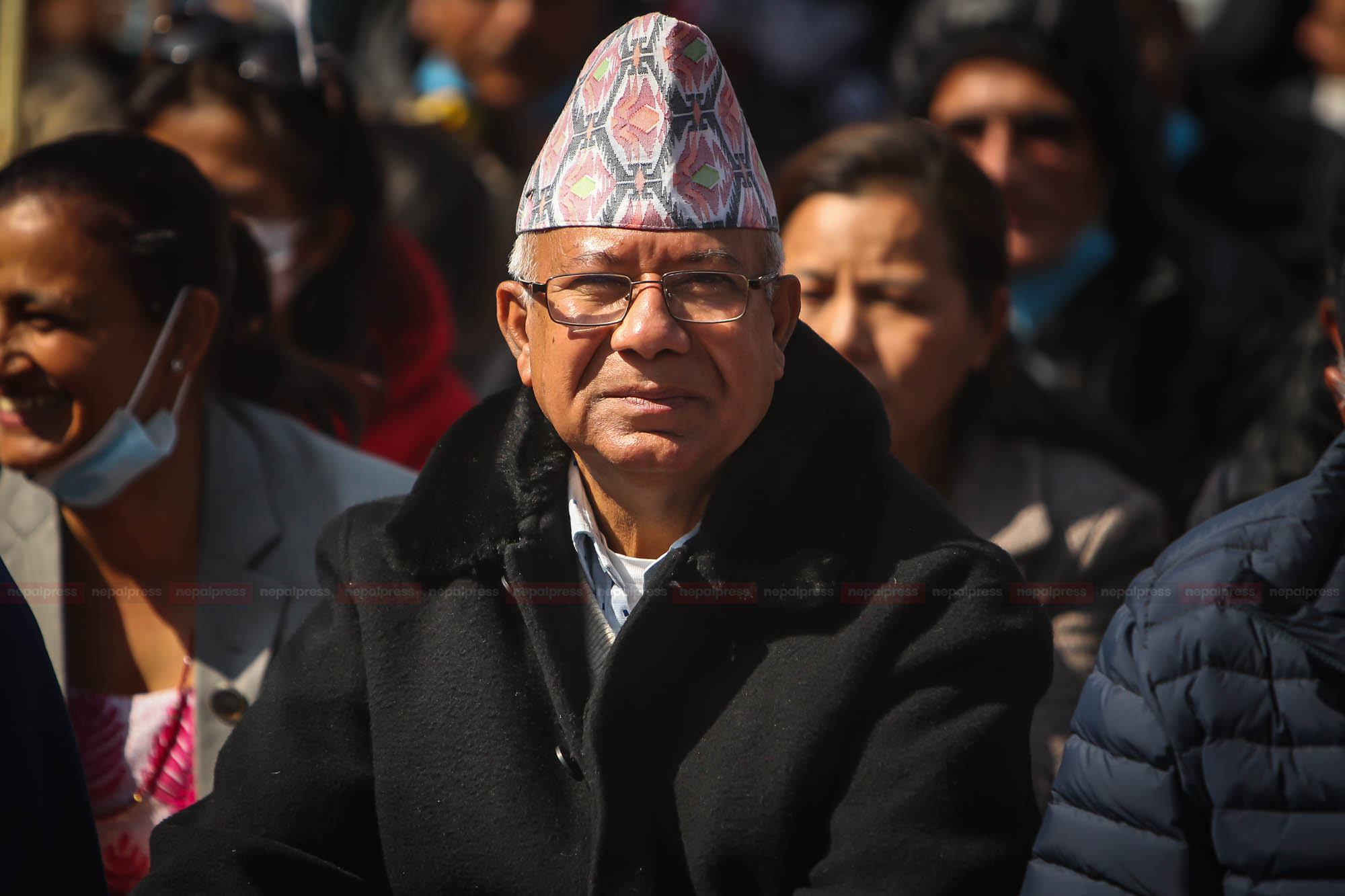 KATHMANDU: The anti-establishment group in CPN-UML finally participated in the party’s parliamentary party meeting held in Baluwatar yesterday. Madhav Kumar Nepal did not go to Baluwatar, but he also did not stop his side’s MPs from joining. This may be because he could not have stopped them anyway.

Bhim Rawal was the only one to support Nepal in boycotting the parliamentary party meeting. Only on Thursday, Nepal and Rawal, who answered the question by asking tough questions to party chairman KP Oli, have been severely hurt by yesterday’s development. Influential leaders of his group are slowly signalling their departure.

Outraged by the meeting convened by Oli in Baluwatar on 11th March and its decisions, the Madhav side held a meeting of central members and federal parliamentarians at a party palace in the capital the next day. Taking time out between the meetings, Nepal had a long talk with journalists.

After talking for about an hour, Nepal said two important things in terms of party unity. He asserted that his “bottom line” was that Oli should withdraw from the decision, not participate in any of the meetings in Baluwatar and that the Left government should continue. Stating that they will not compromise with Oli if those conditions are not fulfilled, he remarked that there shall be a great miracle for the UML. At that time, there was high morale in Nepal’s speech.

Less than a month after that, the situation has changed. The Nepal side is gradually backing down from its stand. More importantly, their own charioteers have stopped holding Nepal’s feet firmly. Scenarios are indicating that Madhav Nepal is alone in his own group.

When the Supreme Court’s decision revived the UML on 11th March, the Nepal side had 38 MPs. Meanwhile, the number has now dropped to 35 after three lawmakers left. Some lawmakers, including Krishna Dahal, have moved towards the establishment.

Lately, leaders like Surendra Pandey, Ghanshyam Bhusal, Gokarna  Bista and Yogesh Bhattarai have softened their stance. The once aggressive Yogesh Bhattarai has also changed his stance. He has started advocating for party unity and it is doubtful that he will support Madhav Nepal now.

Bhattarai had met Leader Nepal on Thursday and said that he would not leave UML even if he was punished. Before handing over the explanation to the party, he had met Nepal and said, “Will you split the party or agree with KP Oli?  I will not quit the party even if I face action. I cannot be with you. ‘

Shortly after leaders Nepal and Bhim Rawal submitted a questioned-filled reply to Chairman Oli, Bhattarai tweeted “extremism should be given up to save the party.”

Let’s all do our best to maintain unity, he wrote on Twitter. “The result of fragmentation will cost the country dearly. We need only look at the recent past to know what consequences extremism can bring.”

Not only Bhattarai but also Surendra Pandey, Ghanshyam Bhusal and Gorkan Bista are not in a position to support Nepal. In yesterday’s parliamentary party meeting, they presented as gently as expected. Bhattarai said that Oli could facilitate party unity.

Speaking on the occasion, Chief Whip Vishal Bhattarai said, “They asked the Prime Minister to contribute towards party unity. They said that the Prime Minister was leading the party through historical times. You are the one who will unite the party. That was what they suggested.”

Leaders other than Bhim Rawal were not ready to respond to party chair Oli’s demand for an explanation. On Thursday, only Nepal and Rawal submitted their explanations of the four leaders who were asked.

The two – Rawal and Nepal – have been serious allegations against Oli.

Surendra Pandey and Ghanshyam Bhusal have not yet submitted their explanations.

The initial stance of the Nepal side was not to attend any meeting convened in Baluwatar. On the strength of the same stance, Nepal-allied leaders had forced Chairman Oli to come to the party office in Dhumbarahi for talks a few days ago.

However, gradually this stance has melted away. Apart from Nepal and Rawal, most of the parliamentarians attended yesterday’s meeting of the parliamentary parties convened in Baluwatar. However, Nepal had succeeded in preventing Oli from attending the party meeting convened on 17th March. Due to his and Bhim Rawal’s stand, the lawmakers who had reached Baluwatar Gate also returned to the national gathering.

That position could not be maintained yesterday. Understanding the situation of his group, Nepal was compelled to send his side MPs to the  Baluwatar meeting under the leadership of senior leader Jhala Nath Khanal. He could not take a ‘bold’ decision from the meeting of the central members available in the Valley sitting at a party palace in Kalanki yesterday.

The meeting decided to fight for party unity and try to ‘push’ Ol ‘back’  from the 11th March decision. Informing reporters about the meeting, leader Raghuji Pant had said, “We have decided to fight within the CPN-UMLstructure to make the party strong and dynamic and to run it in a systematic manner.”

There are indications that Nepal, the leader who has been isolated from his own charioteers, is ‘compromising’ and moving forward with determination. Oli has clearly said that the activities of Nepal and Rawal are actionable.