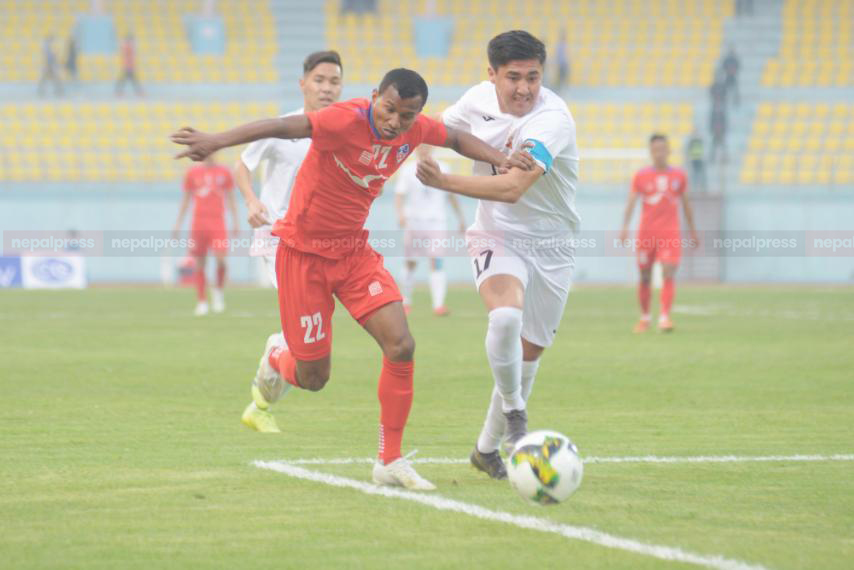 KATHMANDU: The Nepali national team is under pressure in the ongoing Three Nations Cup at its home ground after the game with Kyrgystan U-23 ended in a goalless draw even when multiple occasions were created at the post but the Nepali side was unable to grab opportunities well.

The strikers of the Nepali senior team, who played for the first time in Dasharath Stadium after six years, seemed to have lost their rhythm. In the 67th minute of the match, Kyrgyz captain Tashev Kamolidin, who committed a foul on Nepali forward Abhishek Rijal, was sent off for a second yellow card. The captain, who had received his first card at the 19th minute of the game was sent off in the 67th minute and thus the team was limited to 10 players for the final 23 minutes.

Anjan Bista’s shot from outside the 18-yard box in the third minute was not in the frame for the Nepali team, which had an impact on ball possession from the beginning. Anjan’s header also missed the post in the fourth minute of Tej Tamang’s cross for Nepal after repeatedly crossing the defensive line of the visiting Kyrgyzstan U-23.

Defender Ananta Tamang’s header from near the 6-yard box in the 10th minute of the corner of Debutant Tridev Gurung proved to be unfortunate for Nepal.

Less than four minutes later, the ball bounced off the pole as Kyrgyz captain Tachev Kamolidin tried to save Anjan’s cross. Ranjit Dhimal’s long-range strike from outside the penalty area in the 49th minute was blocked by Kyrgyz defender Kumarabaj Yulu Beiman.

In the 53rd minute, a free-kick from 25 yards by Borubaev Gulhijit came out of the crossbar for the visiting Kyrgyz team, which rarely reached Nepal’s goal post.

Less than a minute later, in the 54th minute, Nepali captain Kiran Chemjong easily saved Gulhijit’s free-kick from 18 yards out of the box.

In the 62nd minute of the match, Ranjit Dhimal’s free-kick followed by Vice Captain Rohit’s header was blocked by Kyrgyz goalkeeper Priyadkin Artem.

Similarly, in the 78th minute, the Kyrgyz goalkeeper blocked Ananta’s overhead kick from inside the 6-yard box.

Bangladesh in the finals

As the game between Nepal and Kyrgyzstan ended in a goalless draw, Bangladesh has secured its place in the finals. Bangladesh beat Kyrgyz U-23 1-0 in the first match of the tournament, which started on Tuesday.