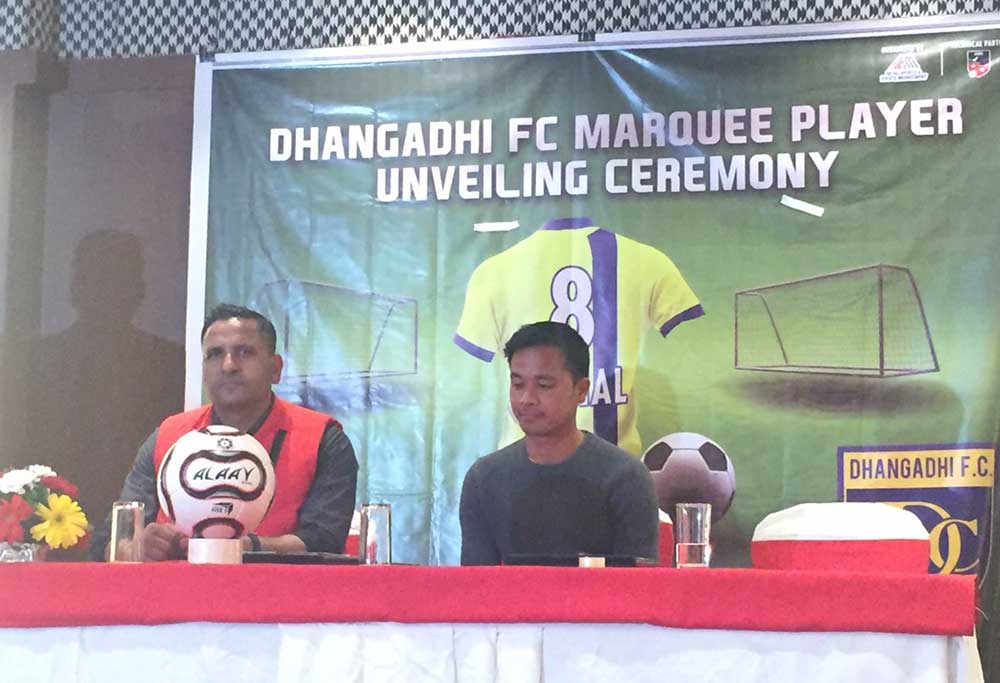 KATHMANDU:  Dhangadhi Football Club has announced Bishal Rai as their marquee player for the maiden Nepal Super League (NSL) on Monday. The 28-year-old midfielder is also a regular member of the Nepal National Team and was the key member of Machhindra FC at last year’s Martyr’s Memorial A Division League organized by the All Nepal Football Association (ANFA).

During the Press-Meet, Subash  Bishahi, owner of the Dhangadhi FC expressed joy on signing a National Team Member as their marquee player for the first franchise football league of Nepal. ‘We are quite excited with our first signing and are preparing a team with the special recommendation of our marquee,’ Shahi added, ‘We are hoping to be champion at the inaugural season of this franchise.’

Rai seemed quite happy and excited to be the first player revealed for the historic season of the Franchise league. ‘I am feeling lucky and very thankful to the owners of Dhangadhi FC for believing in me and choosing me as a marquee player,’ he added, ‘I had a discussion with other clubs too, but I chose Dhangadhi FC because of their plan and effort to sign good foreign players for this season.’

The franchise NSL organized by Nepal Sports and Event Management (NSEM), is set to be held from 24th April to 8th May at Dasharath Stadium, in which six other franchise teams are participating along with Dhangadhi FC. The team recruitment will be done by player auction, set to be held on Friday. Local Player will be categorized into four categories: A,B,C and D. As per the organizer, each team should have at least two foreign players in the starting lineup.