Civil Movement gone astray: Can everything be termed a ‘Regression’? 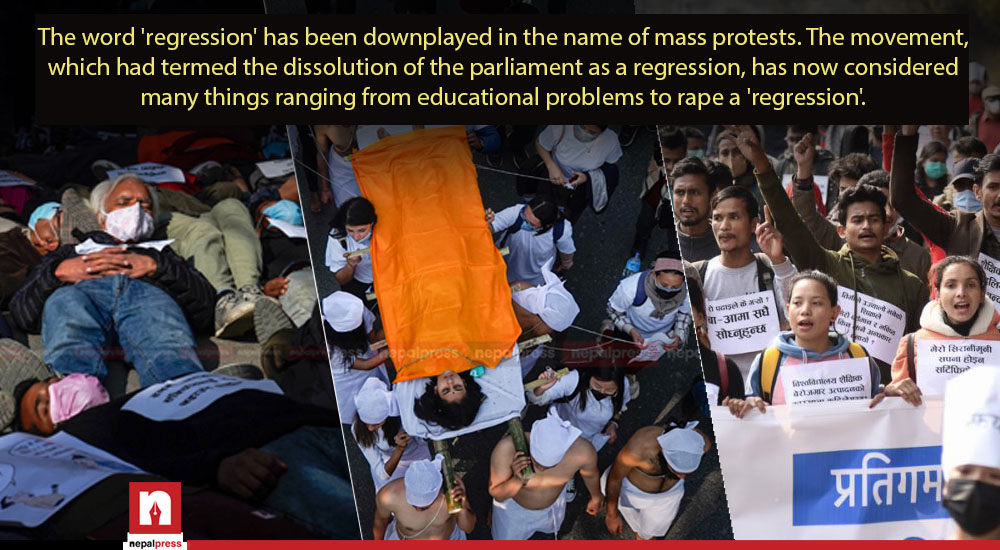 KATHMANDU: The Prachanda-Madhav faction of the Communist Party of Nepal is in constant agitation against the government’s decision to dissolve the House of Representatives. The Nepali Congress is also agitating calling the dissolution ‘unconstitutional and undemocratic’.

Meanwhile, the Janata Samajwadi Party has been holding agitations and rallies, while the four smaller non-mainstream leftist parties have formed a ‘strategic front against regression’. However, the most active is another group. This group has been carrying out various activities in the name of “Civil Mass Movement’’ since the dissolution of the parliament.

Who are citizens, who are not?

Both groups of the Communist Party of Nepal have taken citizens to the streets. No matter who makes the call, those who reach the streets cannot be considered ‘non-citizens’.

However, the banner of the civil mass movement is different. It includes activists of different parties, writers, literary figures, professors, artists and others. As the civil movement which started on December 26, is about to complete two months, it is natural that interest in its activists will increase. At present, writer Yug Pathak, journalist Narayan Wagle, writer Khagendra Sangraula, filmmaker KP Pathak, painter Ghimire Yuvraj, human rights activist JB Bishwakarma, filmmaker Manoj Pandit, poet Biplav Pratik and others are at the forefront of the civil movement. Raghuji Pant, the leader of the Prachanda-Nepal group of the CPN was also once seen in the civil movement.

Writer Yug Pathak, who is coordinating the movement, says that the civil movement is common to all.

“All the citizens who consider the dissolution of parliament as regression are members of our movement. We are not civic leaders. We do not call anyone a leader or a follower”, Pathak told Nepal Press. He said that citizens of all walks of life participated in the movement.

Tableau of the Civil Movement

The role of civil society in the democratic people’s movement of 2062/63 was exemplary. At that time, the purpose of civil society was the same – the end of the monarchy and the establishment of democracy. At present, the agenda of the mass civil movement is multi-dimensional.

Concluding that regression will not be corrected only with the restoration of parliament, the activists of the massive civil movement say that they are not only against political regression.

Pathak said “The dissolution of the parliament by KP Oli is a regression, but the regressive ideas prevailing in all the political parties and the society have made Oli a regressor. That is why we are agitating against the reactionary ideology.” The massive civil movement marched to Baluwatar on January 25. Police had intervened when the agitation started from Kamalpokhari. The engineers also objected to the use of dozers and concrete in the construction of Kamalpokhari.

On February 5, a massive civil movement marched to Shital Niwas. From that movement, the activists were mainly opposed to the appointment of constitutional commissions. Similarly, a massive civil movement organized the Singha Durbar Women’s March on February 12. The movement had raised its voice against rape and violence against women, rather than dissolution of the parliament. During the same march, a young woman was made a ‘living corpse’ and conch shells were also blown.

Similarly, a ‘TU March’ was held at Tribhuvan University on Monday on behalf of the massive civil movement. The movement focused mainly on the weaknesses of Tribhuvan University. In this way, the civil mass movement has been accused of being ‘misguided’ as every demonstration has been linked to a subject other than the main agenda. Meanwhile, the Tundikhel March has been announced on February 19. The main demand of the Tundikhel March is to make Tundikhel accessible to people, instead of military control.

Some activists, who are positive about the civil mass movement, are worried that the agenda has gone astray. ‘Initially, the move to dissolve the parliament was unconstitutional, so we raised our voices against it. At present, there is a perception of the civil movement on many issues. There are fears that this could jeopardize the core agenda,” said a writer who attended the first day of the movement.

The word ‘regression’ has been downplayed in the name of mass protests. The movement, which has termed the dissolution of the parliament as a regression, has now termed many things ranging from educational problems to rape a ‘regression’.

Was it the right time for the mass civil movement, which claims to be opposed only to political regression, to raise its voice against perversions in all sectors? Engineer Pathak says that there is no alternative than to stand against regression.

“Political regression is the main issue at the moment, but there is pressure from the people of all regions to speak out against all kinds of regression. Regressive thinking in all sectors of society is the root of political regression,” said Pathak.

“We are citizens of this society. Everyone can see what kind of people are in the movement. Nothing has been hidden. We have mobilized support from participants of the anti-regression movement,” said Pathak.

In the past, political parties seemed helpless in the face of the civil movement. While there is competition between the parties to take more people to the streets, the ‘same old face’ is seen everywhere in the civil movement. However, the mass civil movement is not ready to accept that there is no civic attraction in its demonstrations. “A lot of people may have gone to the Prime Minister’s meetings and gatherings, but the majority of citizens are against regression. So we have to look at ideas, not numbers”, says Pathak.