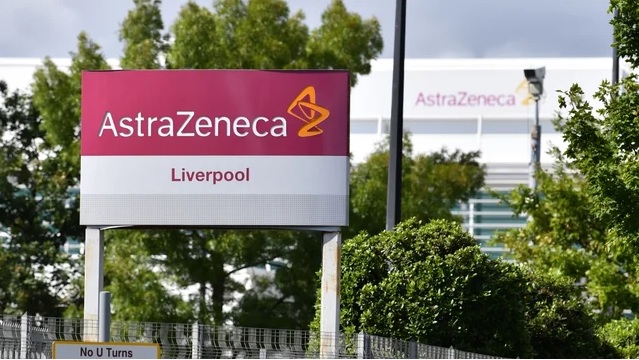 THE SIGN IN FRONT OF THE ASTRAZENECA PLANT SAYS – NO U TURNS, AND IRONICALLY  IT FINDS ITSELF ACCUSED OF THE SAME.

At the core of the problem are production delays at separate factories in Belgium that make the Pfizer-BioNTech vaccine and the one developed by AstraZeneca and the University of Oxford. With a new and more contagious coronavirus variant fueling a surge of cases in several European countries, those delays have undermined efforts to get shots into millions of people’s arms, ratcheting up the global competition for doses.

The Hill has reported that the feud between the European Union and AstraZeneca is continuing after AstraZeneca reportedly delayed the delivery of millions of vaccines the two had agreed on.

AstraZeneca originally agreed to give the EU 80 million doses of the coronavirus vaccine. They cut back that number to 31 million doses with the EU saying they received even less than that amount, the Associated Press reported.

“Our contract is not a contractual commitment, it’s a best effort,” AstraZeneca Chief Executive Pascal Soriot said in an interview with an Italian newspaper. “Basically, we said we’re going to try our best, but we can’t guarantee we’re going to succeed. In fact, getting there, we are a little bit delayed.”

The EU was originally supposed to pay AstraZeneca 336 million Euros ($407 million). An EU official told the Associated Press that the EU will recover some of its money if AstraZeneca doesn’t meet their end of the deal.

The EU even threatened on Monday to establish export controls on any coronavirus vaccines made in the EU.

MEANWHILE, IT IS EU VERSUS UK AS WELL REPORTS NYT

As vaccine production falls behind schedule, and the European Union lags in inoculating people, Brussels and London are lobbing threats and accusations at each other.

The vaccine wars have come to Europe.

For months now, wealthy countries have been clearing the world’s shelves of coronavirus vaccines, leaving poorer nations with little hope of exiting the pandemic in 2021.

But a fresh skirmish this week has pitted the rich against the rich — Britain versus the European Union — in the scramble for vials, opening a new and unabashedly nationalist competition that could poison relations and set back collective efforts to end the pandemic.

The European Union, stung by its slow progress on vaccinations, threatened this week to tighten rules on the shipment of Belgian-made shots to Britain.

British lawmakers, in turn, have accused their European counterparts of a blackmail campaign that could embitter relations for a generation.

And poorer countries, already at the back of the line for vaccines, could face even longer waits if the intense squabbling among rich countries drives up prices for everyone else.

“I call on AstraZeneca to engage fully to rebuild trust, to provide complete information and to live up to its contractual, societal and moral obligations,” said Stella Kyriakides, the European Commissioner for health and food safety.

Kyriakides said that if AstraZeneca can’t fulfill its commitment using EU facilities, it should send some of the vaccines they are making in the United Kingdom. The statement comes after the UK separated from the EU.

AstraZeneca is not approved by EU’s drug regulators yet but is expected to be reviewed on Friday. Right now, only Moderna and Pfizer vaccines have been authorized for use in the EU.

AstraZeneca hopes to distribute three billion doses of the coronavirus vaccine by the end of this year.