Both Indian Government and Farmers brace for NEXT round of confrontation 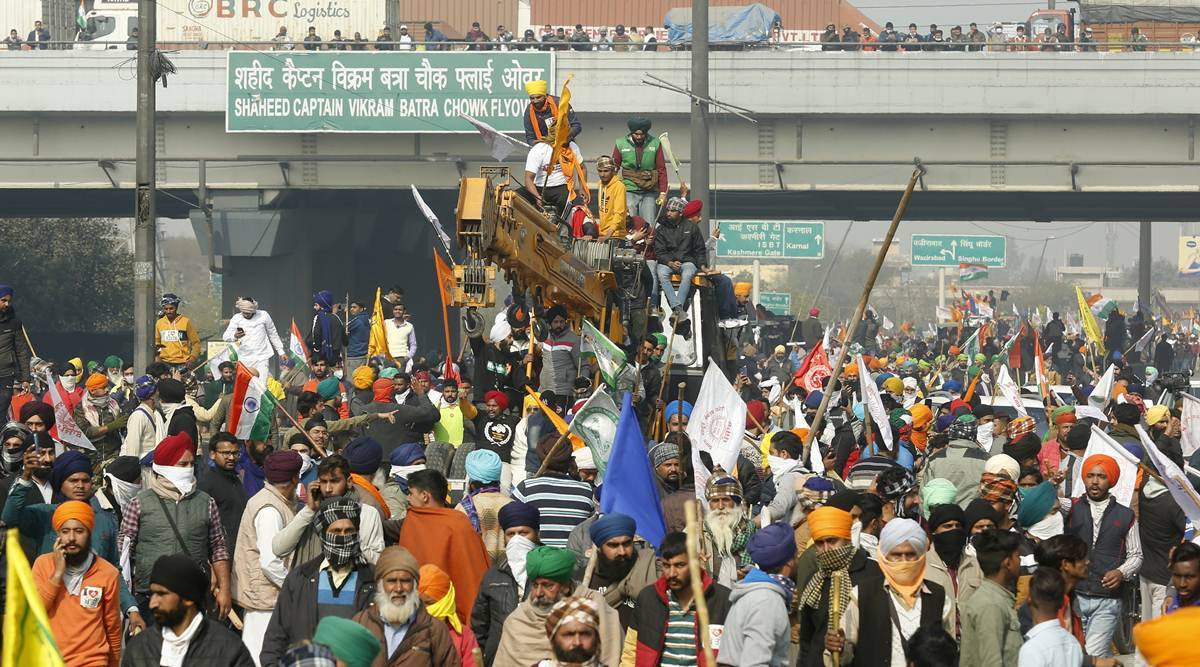 NEW DELHI (Agencies): Tens of thousands of farmers who stormed the historic Red Fort on India’s Republic Day were again camped outside the capital on Wednesday after the most volatile day of their two-month standoff left one protester dead and more than 300 police officers injured.

The Delhi Police Wednesday detained around 200 protesters on charges of rioting, damaging public property and attacking police personnel during the Republic Day violence on Tuesday. The Police said they are making arrests after conducting proper verification and that 22 FIRs have been registered so far. The Delhi Police has also registered an FIR mentioning the names of nine farm leaders, including Yogendra Yadav.

The protests demanding the repeal of new agricultural laws have grown into a rebellion that is rattling Prime Minister Narendra Modi’s government. On Tuesday, more than 10,000 tractors and thousands of more people on foot or horseback tried to advance into the capital, shoving aside barricades and buses blocking their path and at times met by police using tear gas and water cannons.

As many as 300 cops have sustained injuries and an official said multiple videos and CCTV footage are being scanned to identify farmers involved and that strict action will be taken against the culprits.

FLAGRANT VIOLATION OR A RANT-OVER-NOTHING BUT A RELIGIOUS FLAG

Their brief takeover of the 17th-century fort, which was the palace of Mughal emperors, played out live Indian news channels. The farmers, some carrying ceremonial swords, ropes and sticks, overwhelmed police. In a profoundly symbolic challenge to Modi’s Hindu-nationalist government, the protesters who stormed Red Fort hoisted a Sikh religious flag.

CLARIFICATION FROM THE OTHER SIDE

‘Nobody disrespected Tricolour, protestors installed Nishan Sahib which was hailed by Rajnath Singh during his China border visit’

Reacting to the unfurling of the Khalsa flag at the Red Fort, Kisan Mazdoor Sangarsh Committee says, ‘What has protesters done after reaching Red Fort? Nobody disrespected the National Flag. They installed Nishan Sahib there. It is same Nishan Sahib which was hailed by Rajnath Singh during his visit to the China border.’

#WATCH: Broken shards of glass, scattered pieces of paper and vandalised ticket counter seen at the Red Fort in Delhi.

A group of protestors climbed to the ramparts of the fort and unfurled flags on January 26. pic.twitter.com/myCOU9QrJK

MOVING TOWARDS THE PARLIAMENT IN THE NEXT MOVE

KMSC general secretary Sarwan Singh Pandher said, ‘Someone instigated protesters to move towards Red Fort. It was not our call. IT cell is working. Don’t believe in rumors. Because everything is peaceful here. Now looking forward to @Kisanektamorcha call to move towards Parliament.’

“The situation is normal now. The protesters have left the streets of the capital,″ New Delhi police officer Anto Alphonse said Wednesday morning.

The protesting farmers’ groups are scheduled to meet later Wednesday to discuss the future course of action. Another march is planned for Feb. 1 when the Modi government is scheduled to present the annual budget in Parliament.

Meanwhile in #Punjab there is no let down in gatherings to protest against #FarmLaws . #Jan26 episode at #RedFort was a conspiracy, they say. Visuals of one such gathering in the parking of railway station #Barnala. @iepunjab @IndianExpress pic.twitter.com/nOKcfo31Xu

“Even if it was a sabotage, we can’t escape responsibility,” said Yogendra Yadav, a protest leader.

Yadav said frustration had built up among the protesting farmers and “how do you control it if the government is not serious about what they have been demanding for two months.”

Several roads were closed again on Wednesday near the police headquarters and Connaught Place areas following a protest by some retired Delhi police officers demanding prosecution of the protesting farmers who engaged in violence, the Press Trust of India news agency said.

Political analyst Arti Jerath said Tuesday’s violence will put the farmers’ organizations on their back foot.

“The Supreme Court has all along said the farmers can continue with the protest without disrupting the life in New Delhi. Tuesday’s development has given the government a handle to go to the top court and say see this is precisely what it was fearing that it would turn violent. ”

Tuesday’s escalation overshadowed Republic Day celebrations, including the annual military parade that was already scaled back because of the coronavirus pandemic. Authorities shut some metro train stations, and mobile internet service was suspended in some parts of the capital, a frequent tactic of the government to thwart protests.

The farmers — many of them Sikhs from Punjab and Haryana states — tried to march into New Delhi in November but were stopped by police. Since then, unfazed by the winter cold and frequent rains, they have hunkered down at the edge of the city and threatened to besiege it if the farm laws are not repealed.

Neeraja Choudhury, a political analyst, said the government failed to anticipate what was coming and prepare for it adequately. “If the farmers are agitated overall India, you can’t dismiss the protests as some opposition inciting the farmers.”

Anil Kumar, a police spokesman, said more than 300 police personnel were injured in clashes with farmers. Several of them jumped into a deep dry drain in the fort area to escape the protesters who outnumbered them at several places.

Police said one protester died after his tractor overturned, but farmers said he was shot. Several bloodied protesters could be seen in television footage.

Police said the protesting farmers broke away from the approved protest routes and resorted to “violence and vandalism.” Eight buses and 17 private vehicles were damaged, said police, who filed four cases over vandalism against the protesters.

NO MORE DIVISIONISM IS UNLIKE NAMO’s STYLE

Since returning to power for a second term, Modi’s government has been rocked by several convulsions. The pandemic sent India’s already-teetering economy into its first-ever recession, social strife has widened and his government has been questioned over its response to the coronavirus pandemic.

In 2019, the year that witnessed the first major protests against his administration, a diverse coalition of groups rallied against a contentious new citizenship law that they said discriminated against Muslims.

“The government on the national security front has failed. I think this government seems to be quite blinkered on the kind of security challenges that it is creating for itself by alienating minority communities, Muslims and Sikhs,” said Arti Jerath, a political analyst.

India is predominantly Hindu while Muslims comprise 14% and Sikhs nearly 2% of its nearly 1.4 billion people.