Indian Media calls it India’s Capitol Hill moment – But who is the despot? 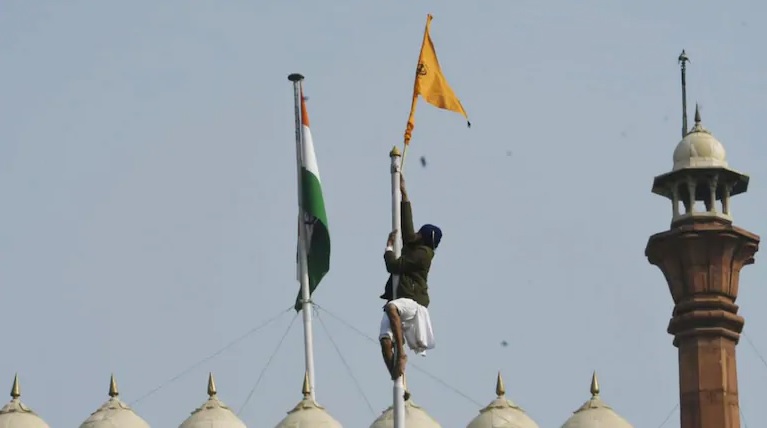 #WATCH A protestor hoists a flag from the ramparts of the Red Fort in Delhi#FarmLaws #RepublicDay pic.twitter.com/Mn6oeGLrxJ

As the day progressed, the unruliness and disorder gathered momentum. And it reached its crescendo when thousands of ‘farmers’ barged into the highly guarded Red Fort (Lal Quila) in old Delhi. Tractors were driven straight inside the iconic monument. 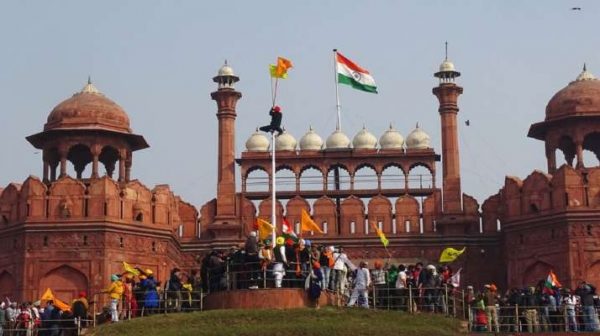 Wielding sticks and clubs and holding the Tricolour and union flags, tens of thousands of farmers atop tractors broke barriers, clashed with police and entered Delhi from various points to lay siege to the Red Fort and climb a flagpole, marring Republic Day celebrations on Tuesday.

While farmer leaders, who have been spearheading the two-month protest at the national capital’s border points to demand a repeal of the farm laws, disowned the protesters, one young man was seen hoisting a yellow triangular flag at a flagpole on the ramparts of the iconic monument.

The protesters were later removed from the premises of the Red Fort. The government also ordered internet services to be shut in parts of Delhi as a security measure. As per an order sent to telecom service providers internet was suspended in areas of Singhu, Ghazipur, Tikri, Mukarba Chowk and Nangloi and their adjoining areas in the NCT of Delhi from 12.00 hours to 23.59 hours on Tuesday.

Earlier in the day, groups of farmers broke police barricades at Singhu, Tikri and Ghazipur border points and forced their way into Delhi — much before the time they were granted permission by Delhi Police for their Republic Day tractor rally.

The police used tear gas at Ghaziabad border and resorted to lathi-charge at Singhu to disperse the farmers, who were expected to hold their tractor rally after the conclusion of the Republic Day parade at the Rajpath. 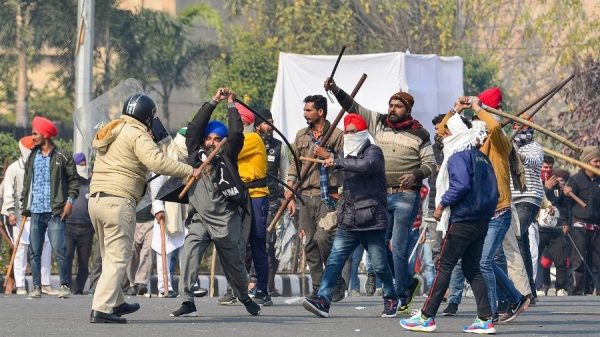 Farmers’ union dissociates itself from ‘antisocial elements’ in rally

‘We have always held that peace is our biggest strength’

Farmers’ union organisation Samyukta Kisan Morcha said some ‘antisocial elements’ infiltrated their tractor rally on Tuesday, and dissociated  itself from those who indulged in violence during the parade.

The union also condemned and regretted the “undesirable” and “unacceptable” events as the parade turned violent after several groups of farmers deviated from the pre-decided route for the march.

The Samkyukt Kisan Morcha, an umbrella body of 41 farmer unions, is leading the protest against the three central farm laws at several border points of Delhi.