Ghandruk Sambad - Brainstorming Cinema revival in the times of Covid

Discussion on tourism in Cinema at Ghandruk Conference

Exploring the relationship between the two 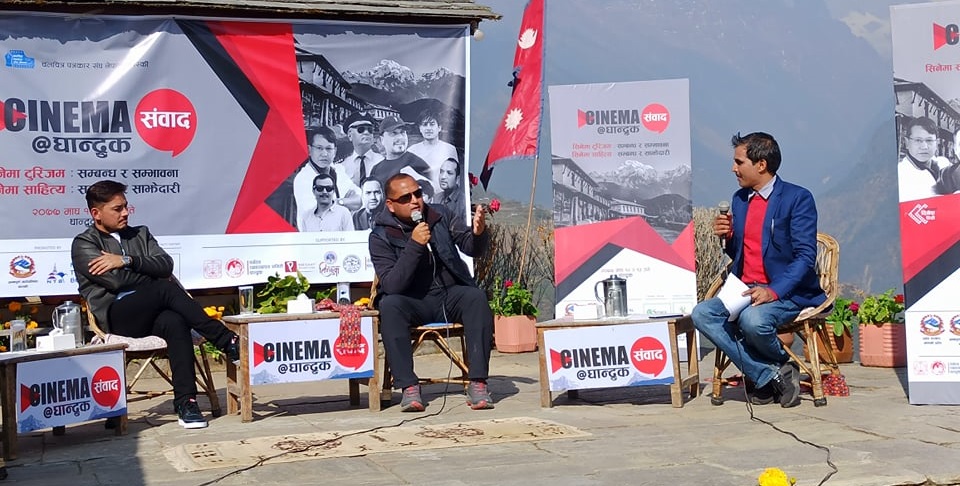 GHANDRUK: Actor and Director Sudarshan Thapa came to Ghandruk about 12 years ago. When they came to shoot the TV series Dalan, the situation was not as comfortable as it is now. They had to carry all the instruments and walk for hours.

But now Ghandruk has seen a change. One can reach the village yard by car. 12 years ago, the shooting equipment was traditionally carried by mules. “It was a difficult time unlike now.  A lot has changed since the second time.” Thapa recalls.

Thapa shared his experience during the ‘Cinema Tourism’ session of the film dialogue program organized by the Film Journalists Association in Ghandruk, Kaski. The dialogue was facilitated by Basu Mishra. Gopi Bhattarai, a tourism entrepreneur was in the program along with Director Sudarshan Thapa as a speaker.

Another speaker, chairman of the Pokhara Tourism Council, Gopi Bhattarai, said it would take some time for the tourism and cinema market to return to normal even if the Corona impact is easing and the market is slowly opening up. “These two areas cannot be revived immediately. It will definitely take some time, ‘he explained.

Bhattarai says that cinema has helped in the promotion of various hidden tourist places.”Some places are undergoing a transformation as a result of Cinema. There should be as much cooperation between cinema and tourism.” He explained Nepali cinema has helped a lot in increasing the number of domestic tourists.

Director Thapa says that not all movies support tourism development. He said that filming in cinemas would not promote tourism immediately. He is of the view that Nepali originality should also be promoted if internal and external tourists are to be attracted on the basis of cinema.

He said, ‘Not all movies play a part in the visibility of a place, If the characteristics of the place and the culture are visible to the audience,  it leads to the promotion of tourism. ‘

Thapa complained that there is no support from the government during the production of Nepali cinema. “Is it because there is no practice of cooperation?” We don’t think the government will help us during the filming. Personally, we get help from the residents of that place.”Sometimes, when we don’t cooperate, we are punished for even small mistakes,” he said.

However, Gopi Bhattarai of Pokhara Tourism Council claims that the businessmen are showing love to Ghandruk cinema. He said that the problem arises due to a lack of coordination among all levels of government.