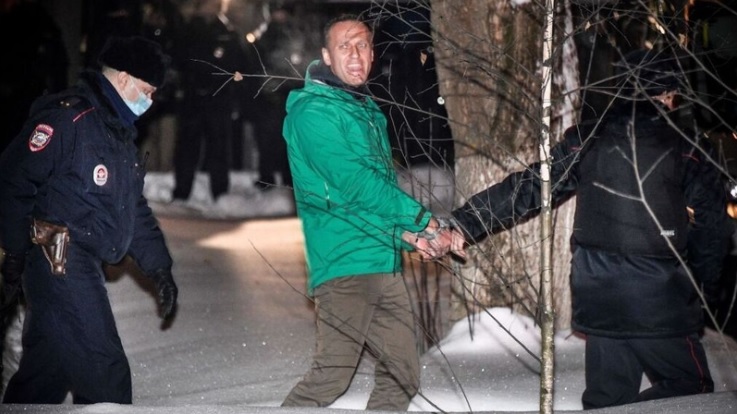 Massive protests took place across Russia on Saturday in support of Alexei Navalny, a Russian opposition leader and vocal critic of President Vladimir Putin. Navalny was arrested last Sunday after returning to Moscow from Germany, where he was treated for a poisoning allegedly linked to the Kremlin five months earlier.

According to Reuters, about 40,000 people took part in the Moscow demonstrations, although police called that number incorrect, estimating the crowd at 4,000. Several thousands more participated in cities across the country, from Yakutsk in the northeast to St. Petersburg in the west, and about 3,000 demonstrators have been arrested in all.

Protesters were met by a strong police presence — and government officials had urged citizens to stay home, arguing that the rallies did not have proper authorization.

“Respected citizens, the current event is illegal,” police reportedly announced during the demonstration in Moscow. “We are doing everything to ensure your safety.”

Few protesters heeded these warnings, and the number of those arrested in protests in Moscow, St. Petersburg, and about 70 other towns and cities swelled to at least 3,000, according to reports from the human rights monitoring group OVD-Info. That includes about 1,100 people in Moscow alone, as of 11:30 pm Moscow time on Saturday.

Navalny’s wife, Yulia Navalnaya, was among those arrested at this weekend’s protests. Heads of his party’s regional offices have also been detained in advance of the protests, as well as members of Navalny’s team, including his press secretary, Kira Yarmysh.

Navalny’s arrest — and the detentions of his team — have galvanized a tremendous mass movement. The size of the Moscow protests is reminiscent of the summer of 2019, when at least 60,000 people demonstrated in that city to demand fair elections. (Navalny was arrested in advance of that movement, too.)

While many of the protesters were Navalny’s supporters, others said they came out more because they want to see a sweeping end to Putin’s authoritarian rule.

“I was never a big supporter of Navalny, and yet I understand perfectly well that this is a very serious situation,” Vitaliy Blazhevich — who, at 57, was one of the demonstration’s more senior participants — told the New York Times.

“Unless we keep coming out [to protest], the problem in this country will never go away,” Natalya Krainova, a former teacher, told the Guardian. “And that problem is Putin.”

Regardless of their motivation, in many places, protesters were met with swift and aggressive police force.

Video out of Moscow, for example, shows police dressed in riot gear beating protesters with batons. Dozens of protesters in that city were arrested outside of the Matrosskaya Tishina detention center, where Navalny is being held.

As night fell, police unleashed smoke grenades on downtown Moscow, and protesters responded with snowballs, according to reporter Alec Luhn.
The demonstrations were also striking for their enormous geographic diversity. On Twitter, the Atlantic reporter Anne Applebaum collected scenes of large protests — composed largely of young people, many waving Russian flags — in the cities of Irkutsk, Novosirbirsk, Vladivostok, Tomsk, and Yakutsk.

Yakutsk is in the east of Siberia, while Vladivostok abuts the Sea of Japan. In a Siberian winter, these protesters were also braving brutally cold temperatures, with temperatures approaching -60°F in some places.

That the protests were so widespread, and that they involved Russians of all ages, is indicative of Navalny’s appeal and ability to mobilize supporters — especially young people — according to the Washington Post.

In recent years, Putin has moved to crack down more aggressively on dissent, with new laws making it more difficult to organize protests. Russians who demonstrated Saturday face jail as well as other consequences.

Artyom, a college student who protested, told the Guardian he and his classmates had been threatened with serious academic consequences, which he said many believed meant expulsion, if they participated.

Putin seems likely to remain in power, despite the public opposition seen Saturday. A recent change to the Russian constitution would allow Putin to hold power for an additional 15 years.

Navalny is the leader of Russia’s opposition movement

In August, Navalny fell ill at a Siberian airport before boarding a flight to Moscow. His team, concerned he wasn’t receiving proper care in Russia, partnered with a humanitarian group that transported him to Germany for treatment. There, doctors traced the cause of his illness, which was found to be novichok, a deadly nerve agent that the Russian government has been known to use.

As Vox’s Alex Ward has written, Navalny always pledged he would return to Russia, even as he continued his criticism of Putin from Germany — including directly accusing the Kremlin of trying to kill him in YouTube videos viewed over 40 million times.

When Navalny arrived at the Berlin airport on January 17 for his return trip home, he said that he was not afraid, even though Russian officials had threatened to arrest him upon his return. Hundreds of supporters violated anti-protest laws to greet his plane at Moscow’s Vnukovo airport. Instead, the plane was diverted to the Sheremetyevo airport, whereupon Navalny was arrested at passport control.

The official charge he faces is failure to appear at a parole hearing, tied to a 2014 embezzlement case. Navalny has claimed those charges are politically motivated. Nevertheless, if the charges stick, he could face years in prison.

His newest arrest follows years of attempts by the Kremlin to stifle his opposition, and to dissuade Navalny from coming home, including by placing him on its federal wanted list, and claiming he avoided inspectors while abroad, as Ward has written:

This kind of thing isn’t new for Navalny. As mentioned, he’s been arrested before — and even poisoned before — so it’s possible he’ll eventually be released and go back to leading Russia’s anti-Putin movement. Sometimes the Kremlin just wants to remind Navalny who’s in charge, and slow down his work, in a manner that attempts to maintain the illusion of Russian democracy.

But it’s also possible Putin has had it, especially as he seeks to stay in power for life. Removing his top political nemesis would surely make such a ploy easier, though it may invite condemnation from other nations, including the United States newly led by President-elect Joe Biden.

Navalny has received support from US officials. Hours after Navalny’s detainment, incoming National Security Adviser Jake Sullivan tweeted a statement condemning the Putin critic’s detainment. “Mr. Navalny should be immediately released, and the perpetrators of the outrageous attack on his life must be held accountable,” he wrote.

And Rebecca Ross, a spokesperson for the US Embassy in Moscow, tweeted on Saturday that “The U.S. supports the right of all people to peaceful protest, freedom of expression. Steps being taken by Russian authorities are suppressing those rights.”