SpaceX On A Song

SPACEX LAUNCHES ITS FIRST BATCH OF 60 STARLINK SATELLITES IN 2021

Rocket landing was risky as the winds exceeded the safety window 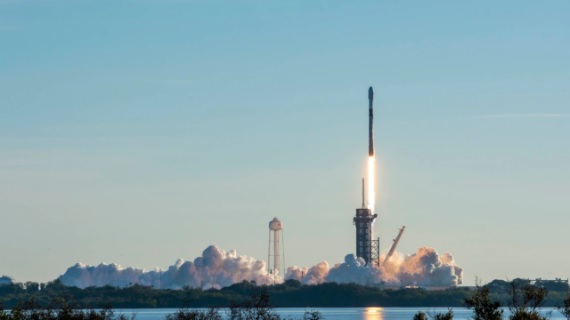 The first batch of Starlink satellites of this year was launched to orbit on 20 January 2021. As per reports, a total of 60 satellites were launched as part of the mission. A Falcon 9 rocket carried the seventeenth batch of satellites at 6.32 pm IST ( 8.02 am EST) from Complex 39 at Kennedy Space Center, Florida and deployed the payload into their intended orbit one hour and four minutes after the launch, as per a UPI report.

The increasing number of satellites in space as part of the massive man-made constellation envisioned by SpaceX head Elon Musk has added to the worry about increasing space junk. However, the recent mission also bore testament to carriage reusability as Falcon 9 was used to deploy payload and land back safely for the eighth time.

The UPI report quoted Jessie Anderson, a lead manufacturing engineer at SpaceX, celebrating the landing of Falcon 9 after the first stage of the booster was safely collected on a long flat-bottomed boat in the Atlantic Ocean. This time, the landing was crucial as the winds in the landing zone where the recovery ship was stationed at sea exceeded the firm’s expected safety window. Hence the first landing of 2021 took place under ‘envelope expansion’ conditions.

With the safe deployment of the recent satellites, the total number of Starlink satellites have reached 955. As per Musk’s plans, SpaceX’s Starlink constellation is going to be a planned network of up to 30,000 satellites.

These satellites are being placed in the low orbit of Earth and are going to form a network to provide broadband internet to various remote areas around the world.