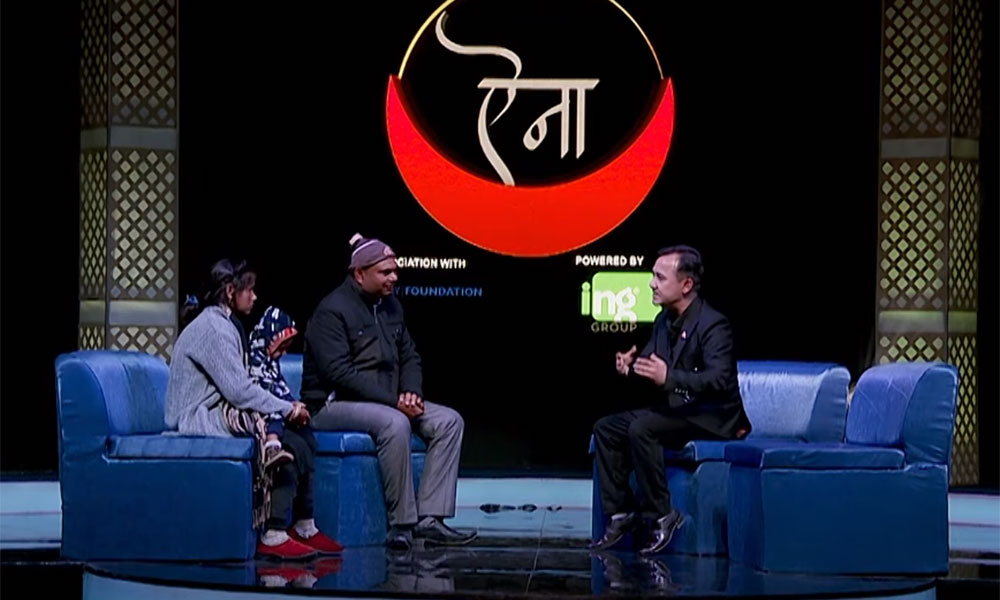 KATHMANDU: Bishwa Prakash Sharma is a famous figure in Nepal’s national politics. A new identity – TV presenter, has been added to his name. The Jhapali leader was also the spokesperson of the main opposition party, Nepali Congress.

Bishwa Prakash has been introduced in a new facet through the social-issue themed program ‘Aina’. The program, produced by a company called Horizon Multimedia and promoted by the Chaudhary Foundation, has started airing on Kantipur TV from Wednesday night.

The issue of child rape was raised in the first episode of the show, with narration of some representative incidents. Bishwa Prakash invited on stage the parents of a girl who was killed after being raped. The details of the incident, narrated by the victim, brought tears to the audience’s eyes. Additional Inspector General of Nepal Police Bishwaraj Pokharel was also invited as a guest in the program.

Despite this being a new genre, Bishwa Prakash seems fit for the role of a TV presenter. There aren’t too many flaws in his communication and gestures. His question and answer with the experts, though, appear a little superficial. Although the program was about an hour-long, it did not seem to reach the depth of the subject. As Nirmala’s murder and other incidents presented in the program have been relentlessly covered in the media before, it could not bind the audience much.

As soon as the program started airing, both praise and criticism for Bishwa Prakash began. Although most initial reactions on YouTube were positive, some have accused it of being a direct copy of Indian actor Aamir Khan’s TV show ‘Satyamev Jayate’, as the presentation and format are very similar.

Critics have asked for reasons behind this program being run by a politician, despite there being no room to question the voicing of social issues.

“It is the role of the media and its professionals to expose the problems of the country and society. Is it not the responsibility of leaders to find solutions to problems? Why isn’t everyone fulfilling their roles and responsibilities well?” one viewer writes.

Another viewer writes, “It felt like Aamir Khan’s Satyamev Jayate. However, it is good to have such programs in Nepal.”

Some leaders within the Congress are not satisfied with the way the Bishwa is running TV programs.

A central member speaking on the condition of anonymity said, “How can a person with such a high profile in politics consider it wise to become the host of a TV show promoted by a private company? This has further exposed his propaganda-oriented character.”

Bishwa Prakash is a strong speaker in himself. Speaking fluently on TV is not a new experience for those who have the ability to do so. However, running a TV show is a new genre for him. As a politician, viewers who have watched his many TV interviews also find the sight of him interviewing others fairly new.

Bishwa Prakash is a former journalist. During the Panchayat period, he used to write in the weekly “Alok” from Jhapa. After the advent of democracy, he became a co-presenter of the radio program ‘Ghatana and Vichar’, which was coordinated by Dev Prakash Tripathi. Later, he was also the short-term editor of ‘Ghatana and Vichar’ published by Dev Prakash. He now writes columns for various newspapers.

From India’s Amitabh Bachchan to Nepal’s Rajesh Hamal, many high profile celebrities in the world have become hosts of TV programs. However, there are only a few examples of a famous politician becoming a TV host.

The main challenge for Bishwa Prakash is to find solutions after raising relevant social issues. He does not fulfil his responsibility just by exposing the wounds of the victims and making the audience cry, like other TV presenters. It will be important for him to take the initiative to make the victims get justice. Otherwise, Bishwa Prakash will only devalue himself politically by becoming a TV presenter.

The program will be aired by Bishwa Prakash for 26 episodes. The remuneration he received for the program has not been disclosed. Writer Anvika Giri has written the script and Aman Pratap Adhikari has directed it.