Says, not scared of Narendra Modi..... 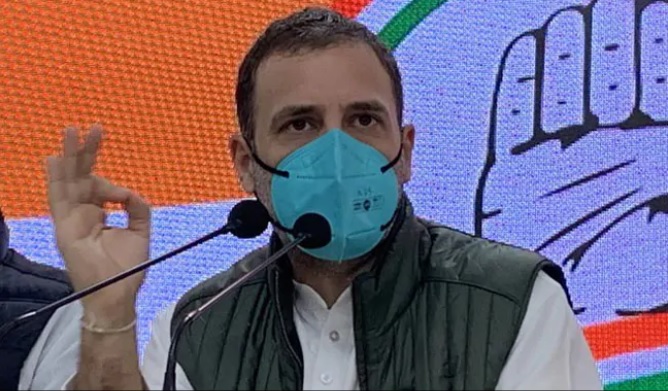 NEW DELHI: Congress MP Rahul Gandhi today pressed further with his party’s backing of the protest by some farmers against the new farm laws as “designed to destroy agriculture”. Taking aim at the centre, he said he’s “not scared of Narendra Modi or anyone”. Mr Gandhi said with the three new laws, the centre has put the entire farm sector into the hands of “three to four crony capitalists”, an allegation that the farmers have been making too.“The new farm laws are designed to destroy the agriculture sector. I support the protesting farmers 100 per cent and every single person in the country should support them as they are fighting for us,” Mr Gandhi said today at the launch of a booklet on farmers and the new laws, adding nothing short of complete withdrawal of the laws would do.

Mr Gandhi also took a swipe at BJP chief JP Nadda, who had earlier criticised him in a tweet over the Congress leader attacking the government on reports that China had built a village in Arunachal Pradesh.

“Farmers know the reality. All farmers know what Rahul Gandhi does. Nadda ji was not at Bhatta Parsaul. I have a character, I am not scared of Narendra Modi or anyone, they can’t touch me but they can shoot me. I am a patriot and will protect my country… I am more fanatic than them,” Mr Gandhi said, referring to violence and alleged rapes during land acquisition in Uttar Pradesh’s Bhatta Parsaul in May 2011.

Protesting farmers who have dug in at the Delhi-Haryana borders have said they will push ahead with a massive tractor rally on January 26, Republic Day. The government approached the Supreme Court seeking to stop the rally as it could tarnish the nation’s image on an important day. The top court, however, left it to Delhi Police to decide whether to allow the tractor rally.

The farmers have met union ministers for talks for at least nine times, but there has been no headway. The government has said it was ready to discuss the laws clause by clause, but the farmers have stuck to their demand of complete repeal of the laws.

The centre has said the laws – passed in September last year – will boost farmers’ incomes by letting them deal directly with big companies and bypass government-regulated wholesale markets. But many of the unions disagree, saying they risk losing their bargaining power and becoming vulnerable to potential bulk buyers. They fear the eventual disappearance of minimum support price or MSP, the guaranteed prices the government pays for their grain.