Is the US on the brink of Civil war?

Trump has possibly whipped up enough hate to implode the US 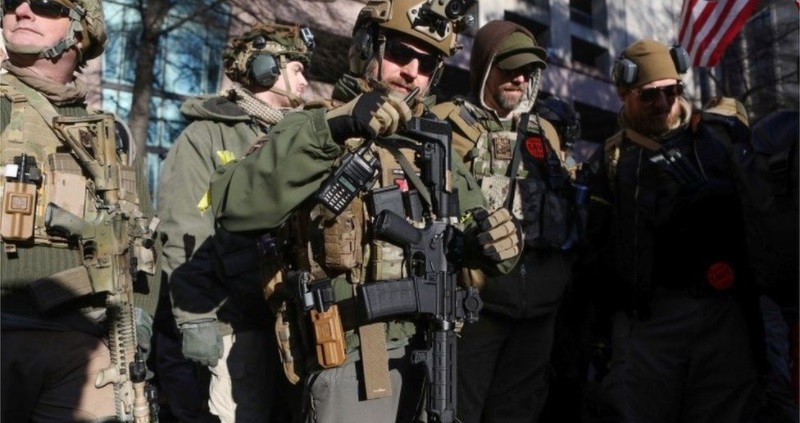 Sample this disturbing piece of information:

American civilians own a disproportionate share of the world’s firearms: The U.S. has just 4% of the world’s population but owns about 40% of civilian-owned guns globally, according to a 2018 report from the Switzerland-based Small Arms Survey. The SAS estimates that American civilians own 393 million guns, ranking the U.S. number one in firearms per capita. And there are costs associated with these high levels of gun ownership: Researchers at Harvard have found that across developed nations, this widespread ownership of firearms is associated with higher rates of gun homicides.

According to a widely cited 2016 study by the University of Washington’s Institute for Health Metrics and Evaluation, the U.S. is second only to Brazil in number of total gun deaths. And the U.S. ranks 20th in per capita gun deaths, with a rate of 10.6/100K people. When the U.S. is compared with other wealthy nations, it becomes an outlier: The gun death rate is nine times as high as Canada’s (0.47 deaths/100K people), and 29 times as high as in Denmark (0.15 deaths/100K), for example.

If all hell breaks loose with so many guns in the hands of radicalized and disenchanted white Americans, even God may not step in to intervene. Many of the gun owners are white supremacists and members of ubiquitous hate organisations across the US. A disturbing number of those involved in the recent siege of the Capitol were ex-military. Are we going to witness a new resurgence of Nazism?

The most frightening part is that their leftist opponents have guns too! So, no one is backing out of the contest. No one needs a whistle to get started, it seems.

BIRMINGHAM, Ala. — The Associated Press reportsed that a war-like imagery has begun spreading in Republican circles after the attack on the U.S. Capitol by a mob of President Donald Trump’s supporters, with some elected officials and party leaders rejecting pleas to tone down rhetoric calling for a second civil war.

In northwestern Wisconsin, the chairman of the St. Croix County Republican Party was forced to resign Friday after refusing for a week after the siege to remove an online post urging followers to “prepare for war.” The incoming chairwoman of the Michigan GOP and her husband, a state lawmaker, have joined a conservative social media site created after the Capitol riot where the possibility of civil war is a topic.

Phil Reynolds, a member of the GOP central committee in California’s Santa Clara County, appeared to urge on insurrectionists on social media during the Jan. 6 attack, declaring on Facebook: “The war has begun. Citizens take arms! Drumroll please….. Civil War or No Civil War?”

The heightened rhetoric mimics language far-right extremists and white supremacists have used for years, and it follows a year of civil unrest over the killing of George Floyd, a Black man, by a white police officer and its links to systemic racism. Some leftists have used similar language, which Republicans have likened to advocating a new civil war.

The post-Floyd demonstrations prompted governments and corporations alike to reevaluate, leading to the removal of Confederate symbols across the South and the retirement of racially insensitive brands.

Then on Jan. 6, demonstrators stoked by Trump’s false claims that he won the 2020 election brought symbols of the Old South to the siege of the Capitol, carrying Confederate flags inside and even erecting a wooden gallows with a noose outside the building.

Democrats say the uptick in war talk isn’t accidental. Rep. Maxine Waters, D-Calif., said Trump began putting his supporters in the frame of mind to make the opening charge years ago and is “capable of starting a civil war.”

“Since his first day in office, this president has spent four years abusing his power, lying, embracing authoritarianism (and) radicalizing his supporters against democracy,” she said in arguing for impeachment. “This corruption poisoned the minds of his supporters, inciting them to willingly join with white supremacists, neo-Nazis and paramilitary extremists in a siege of the United State Capitol building, the very seat of American democracy.”

There are parallels between now and the run-up to the Civil War, including a fractious national election that ended with presidents — Abraham Lincoln in 1860 and Joe Biden in 2020 — who millions rejected as illegitimate victors, said Nina Silber, co-president of the Society of Civil War Historians.

Lincoln won the Electoral College but came away with only a plurality of the popular vote in a four-way race. Biden won the popular vote by 7 million over Trump and defeated him decisively in the Electoral College, 306 to 232. Dozens of lawsuits by Trump and his allies seeking to overturn the results failed, some of them turned away by federal judges Trump himself nominated. Then-Attorney General William Barr said the Justice Department could find no evidence of widespread fraud that would have changed the election’s outcome.

While the same geographic split doesn’t exist today as when the Civil War started in 1861 and there is no mass preparation for all-out conflict, Silber said white anger and resentment fueled both eras.

“At the time of the Civil War, this took the form of Southern white men angry at the idea that the federal government would interfere with their right to own Black slaves. Today, I think this takes the form of white people who believe that Black and brown people are making gains, or getting special treatment, at their expense,” Silber, who teaches at Boston University, said in an email interview.

Just as happened generations ago, partisans are using strident words and images to define the other side — not just for policies with which they disagree but as evil, said George Rable, a retired historian at the University of Alabama.

“I think both then and now, we need to worry about the unanticipated consequences of overheated rhetoric and emotions,” he said. “Secessionists then hardly anticipated such a bloody civil war, and their opponents often underestimated the depth of secessionist sentiment in a number of states.”

State Rep. Tim Butler, a Springfield Republican who represents the same area as Lincoln did in the state legislature, condemned the attack on the Capitol during a speech on the Illinois House floor and urged more Republicans to speak up.

“If you’re not stepping up and denouncing this, no matter where you fall on the political spectrum, I don’t have a place for you …,” Butler said. “The favorite son of this city was murdered because of a civil war as he was president. I’m not going to see a civil war on my watch, I can tell you that.”

The question is whether those stoking the war talk can be controlled by the more moderate elements within the party, or whether they will become the dominant voice.

Randy Voepel, a state Assemblyman in California, backtracked after referencing an earlier war — the American Revolution — in a Jan. 9 San Diego Union-Tribune article: “This is Lexington and Concord. First shots fired against tyranny. Tyranny will follow in the aftermath of the Biden swear in on January 20th.”

More than three dozen veterans and officials have called for Voepel to be expelled from office. He has since revised his war-like rhetoric with a condemnation of the “violence and lawlessness” at the Capitol and a call for healing.

The other California Republican, Reynolds, said he has no plans to step down from his local party position. He told the San Francisco Chronicle that he wasn’t trying to incite violence with his “war has begun” rhetoric, but simply reporting what he saw on television: “My statement was that this can’t happen. I was condemning it with my words. It was taken out of context,” he said.

Democratic state Assemblyman Evan Low isn’t buying it. He called for Reynolds’ resignation, telling the Chronicle that the man he has known for two decades was “a genuine and warm human being” but was radicalized by Trump’s “poison and lies.”

In Missouri, state GOP Chairwoman Jean Evans had enough of the war talk. She resigned after she was barraged by calls from Trump supporters, some of whom demanded a military coup to keep Trump in office “no matter what it takes.”

“There’s a lot of good Republicans right now who totally disagree with what’s going on,” she told KMOX. “It’s been very scary and frightening and un-American from my perspective, and definitely not part of the conservative party I embrace.”

Andrew Hitt, the Republican chairman in Wisconsin, faced off against the St. Croix County party without initial success, describing the call to war as an “ill-chosen phrase” and urging its removal.

Despite his plea and those of Democrats and a Republican sheriff, the post remained defiantly in place until a week after the Capitol attack. The website went dark Wednesday without explanation, and the county GOP chairman, John Kraft, resigned on Friday. He did not return a call seeking comment.

Silber, the Civil War historian, said she is worried the attack on the Capitol wasn’t the last stand for enraged Trump supporters.

“I think we can see how well-organized right-wing militia groups have become and how well armed they are, and that makes for an extremely explosive situation,” she said. “I don’t know if that would be ‘war’ in the technical sense, but there could be an extended period of violent attacks.”