WHO in Wuhan to lock the stables 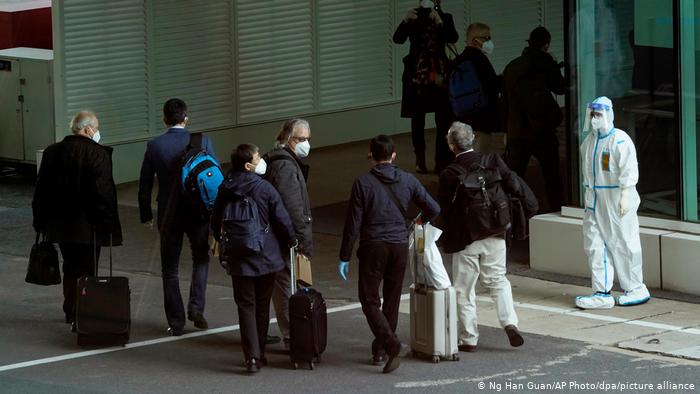 BEIJING — The Associated Press has deeply investigated the going-ons in China and reported its findings of what is seemingly hidden from the public eye. Right from stifling the cry of the late whistle-blower Lin Wenliang, the Ophthalmologist who forewarned on Covid, a cover game seems to be the main official strategy as has been reported.

Meanwhile, China says it is now treating more than 1,000 people for COVID-19 as numbers of cases continue to surge in the country’s north.

The National Health Commission said Friday that 1,001 patients are under care for the disease, 26 of them in serious condition. It says 144 total new cases were recorded in the previous 24 hours.

The province of Hebei, just outside Beijing, accounted for 90 of the new cases, while Heilongjiang province farther north reported 43 new cases.

While there have been no reports of hospital bed shortages, Hebei has begun constructing a new quarantine center outside the provincial capital of Shijiazhuang in case it is needed.

Shijiazhuang and the cities of Xingtai and Langfang are under virtual lockdown, confining more than 20 million people to their homes.

The WHO team of international researchers that arrived in the central Chinese city of Wuhan on Thursday hopes to find clues to the origin of the COVID-19 pandemic.

Unfortunately, Coronavirus origins have become a high-stakes blame game due to heightened tensions and trade war between the US and China. As is the norm under such circumstances, every effort is being made to stifle the truth and project the version that suits each side.

The visit has been shrouded in secrecy, with neither China nor the WHO revealing exactly what the team will do or where it will go. The search for the origins is likely to be a years-long effort that could help prevent future pandemics.

The industrial and transportation hub on the Yangtze River is the first place the coronavirus surfaced in the world. It’s possible that the virus came to Wuhan undetected from elsewhere, but the city of 11 million is a logical place for the mission to start.

People began falling ill in December 2019, many with links to a sprawling food market that dealt in live animals. The growing number of patients triggered alarms that prompted China’s Center for Disease Control and Prevention to send a team to investigate.

The disease would ravage Wuhan before it was brought under control in March. The city was locked down on Jan. 23 with little or no warning.

WHAT IS THE TEAM’S AGENDA?

First they have to quarantine for 14 days, during which they will work with Chinese counterparts via video conference. Possible visits after quarantine are the Huanan Seafood Market, the site of the December 2019 cluster of cases, and the Wuhan Institute of Virology.

Scientists initially suspected the virus came from wild animals sold in the market. The market has since been largely ruled out but it could provide hints to how the virus spread so widely. Samples from the market may still be available, along with the testimony of those involved in the early response.

The Wuhan Institute of Virology maintains an extensive archive of genetic sequences of bat coronaviruses built in the wake of the 2003 SARS pandemic, which spread from China to many countries. WHO team members would hope for access to lab logbooks and data, both junior and senior researchers and safety protocols for sample collection, storage and analysis.

China has firmly rejected calls for an independent outside investigation. The head of the WHO recently expressed impatience with how long China took to make necessary arrangements for the expert team’s visit.

China stifled independent reports about the outbreak and has published little information on its search for the origins of the virus. An AP investigation found that the government has strictly controlled all scientific research related to the outbreak and forbids researchers from speaking to the press.

State media continue to play up reports that suggest the virus could have originated elsewhere. In announcing the experts’ visit, Foreign Ministry spokesperson Zhao Lijian said “the tracing of the virus origin will most likely involve multiple countries and localities.”

The AP reported that a China CDC lab notice on Feb. 24 put in new approval processes for publication under “important instructions” from Chinese President Xi Jinping. Other notices ordered CDC staff not to share any data, specimens or other information related to the coronavirus with outside institutions or individuals.

The next day, China’s cabinet, the State Council, centralized all COVID-19 publication under a special task force. The notice, obtained by the AP and marked “not to be made public,” was far more sweeping in scope than the earlier CDC notices, applying to all universities, companies and medical and research institutions.

The order said communication and publication of research had to be orchestrated like “a game of chess” under instructions from Xi, and propaganda and public opinion teams were to “guide publication.” It went on to warn that those who publish without permission, “causing serious adverse social impact, shall be held accountable.”

“The regulations are very strict, and they don’t make any sense,” said a former China CDC deputy director, who declined to be named because they were told not to speak to the media. “I think it’s political, because people overseas could find things being said there that might contradict what China says, so it’s all being controlled.”

After the secret orders, the tide of research papers slowed to a trickle. Although China CDC researcher Liu Jun returned to the market nearly 20 times to collect some 2,000 samples over the following months, nothing was released about what they revealed.

On May 25, CDC chief Gao finally broke the silence around the market in an interview with China’s Phoenix TV. He said that, unlike the environmental samples, no animal samples from the market had tested positive.

The announcement surprised scientists who didn’t even know Chinese officials had taken samples from animals. It also ruled out the market as the likely source of the virus, along with further research that showed many of the first cases had no ties to it.

Also, the focus is perhaps being shifted from bats found in caves and mines and widely eaten, to porcupines.

Particularly sensitive is the mine shaft where the closest relative of the COVID-19 virus — called “RaTG13” — was found.

RaTG13 was discovered after an outbreak in 2012, when six men cleaning the bat-filled shaft fell ill with mysterious bouts of pneumonia, killing three. The Wuhan Institute of Virology and the China CDC both studied bat coronaviruses from this shaft. And although most scientists believe the COVID-19 virus had its origins in nature, some say it or a close relative could have been transported to Wuhan and leaked by mistake.

Even as they controlled research within China, Chinese authorities promoted theories that suggested the virus came from elsewhere.

The government gave Bi Yuhai, the Chinese Academy of Sciences scientist tapped to spearhead origins research, a 1.5 million RMB grant ($230,000), records show. A paper co-authored by Bi suggested an outbreak in a Beijing market in June could have been caused by packages of contaminated frozen fish from Europe.

China’s government-controlled media used the theory to suggest the original outbreak in Wuhan could have started with seafood imported from abroad — a notion international scientists reject. WHO has said it is very unlikely that people can be infected with COVID-19 via packaged food, and that it is “highly speculative” to suggest COVID-19 did not start in China. Bi did not respond to requests for an interview, and China has not provided enough virus samples for a definitive analysis.

Prohibitory order extended in Kathmandu Valley for one week