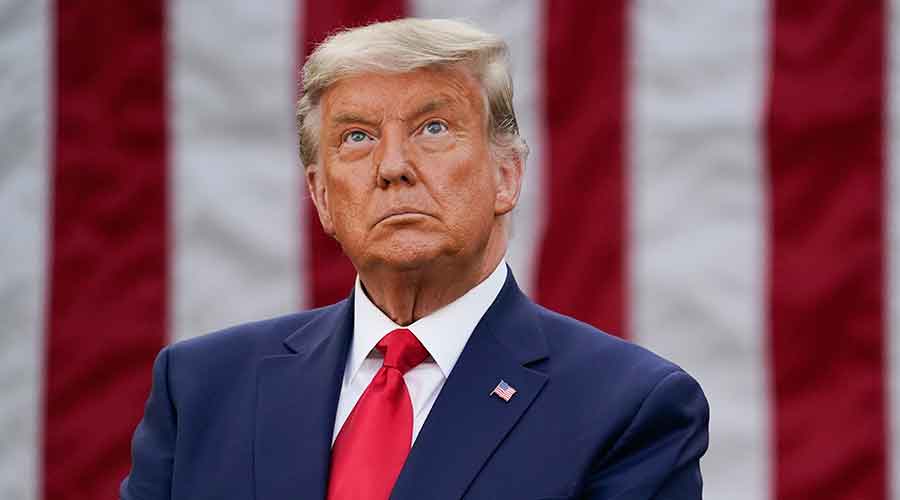 Trump manages an unparalleled feat with a ghastly flourish!

WASHINGTON: The US House of Representatives is ready to vote on articles of impeachment against President Donald Trump on Wednesday, thus opening the possibility of him becoming the only president in American history to be impeached twice.

The article of impeachment charges Trump with a count of ‘incitement of insurrection’ for his actions on January 6, when he delivered a speech inciting his supporters to lay siege to the Capitol, an action that temporarily halted the counting of Electoral College votes and resulted in the deaths of five individuals, including an officer of the US Capitol Police.

On Tuesday night, House Speaker Nancy Pelosi named the Managers of the impeachment trial of Trump. The Lead Manager is Congressman Jamie Raskin, who is the main author of the articles of impeachment.

It is their constitutional and patriotic duty to present the case for the President’s impeachment and removal. They will do so guided by their great love of country, determination to protect our democracy and loyalty to our oath to the Constitution. Our Managers will honour their duty to defend democracy ‘For The People’ with great solemnity, prayerfulness and urgency, Pelosi said.

The move came after the House passed a resolution calling on Vice President Mike Pence to invoke the 25th Amendment to strip Trump of his duties. Pence in a letter to Pelosi, a top Democratic leader, declined to do so.

Earlier, the House Judiciary Committee Chairman Jerrold Nadler released a majority staff report for the impeachment of Trump. The 50-page report made a strong case to impeach the Republican president.

In the words of Vice President Pence, the ‘Presidency belongs to the American people, and to them alone.’ President Trump has falsely asserted he won the 2020 presidential election and repeatedly sought to overturn the results of the election. As his efforts failed again and again, President Trump continued a parallel course of conduct that foreseeably resulted in the imminent lawless actions of his supporters, who attacked the Capitol and the Congress, the report said.

This course of conduct, viewed within the context of his past actions and other attempts to subvert the presidential election, demonstrate that President Trump remains a clear and present danger to the Constitution and our democracy, the report alleged.

The House must reject this outrageous attempt to overturn the election and this incitement of violence by a sitting president against his own government.

“President Trump committed a high Crime and Misdemeanor against the Nation by inciting an insurrection at the Capitol in an attempt to overturn the results of the 2020 Presidential Election. The facts establish that he is unfit to remain in office a single day longer and warrant the immediate impeachment of President Trump, the report said.

In Texas, where he was travelling, Trump said that the impeachment ‘hoax’ is a continuation of the greatest and most vicious witch hunt in the history of the country. It is causing tremendous anger and division and pain — far greater than most people will ever understand, which is very dangerous for the USA, especially at this very tender time, Trump said.

Former Harvard Law professor Alan Dershowitz, who defended Trump a year ago in the Senate trial after the House impeached him, decried the latest impeachment move.

It comes within core political speech. And to impeach a president for having exercised his First Amendment rights would be so dangerous to the Constitution. It would lie around like a loaded weapon ready to be used by either party against the other party, Dershowitz told Fox news in an interview.

The Democratic-led House of Representatives on December 18, 2019 had approved the articles of impeachment against Trump, charging him of pressuring Ukraine to smear Joe Biden, using nearly USD 400 million in military aid as leverage.

However, the Republican-controlled Senate in February 2020 acquitted him of the two charges — abuse of power and obstruction of Congress.

Impeachment is about preserving the Nation from a threat to the constitutional order, not imposing punishment. Nowhere did the Framers suggest that a President must be allowed to remain in office if his abuses involved speech that would otherwise be shielded from criminal regulation by the First Amendment, said the House Judiciary majority report released on Tuesday.

This would be a strange and irrational limitation: Presidents would be free to openly advocate the overthrow of the United States government or the adoption of fascism, and Congress would be powerless to remove them on that basis, it said.

Moreover, given that many prior impeachable offences have involved at least some conduct that might rank as protected speech, applying a rigid First Amendment rule in this field would risk obfuscating Presidential conduct whether involving speech or not that menaces the American democratic system, said the report.