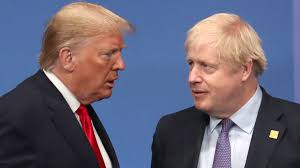 It takes two to tango. And the UK has danced in (un)holy unison with the US since WWII. This time, Boris Johnson, the UK PM was latching on to hopes of a Trump victory and a world-beating UK-US trade deal, which might well have involved a no-deal Brexit, reports the Guardian.

Johnson enthusiasts tell us what a brilliant tactic it was for the prime minister to push the negotiations with the EU to the last minute, but reality slapped the British hard.

The Guardian concludes in a scathing piece that the Brexit achieved is a fairly suicidal one.

Overall, the Brexit achieved is quite shabby, as described by Labour Leader Sir Keir Starmer:

As if that was not bad enough, came a new wave of lockdowns caused by the new strain of the Coronavirus. The Guardian columnist claims that in the UK, they are close to being world leaders in the degree to which the economy and people are suffering.

“The health service was ill-prepared for Covid: the government should have learned years ago that every winter there are pressures on hospital capacity, and that it is a false economy not to allow enough spare capacity in hospitals.”

Johnson recently claimed that leaving the EU was not a “rupture” from “our friends” on the continent (oddly enough, we are still in Europe). This is a man who had an expensive education. Brexit constitutes a huge rupture with continental Europe, and our friends know it.

Hence, notwithstanding the way we tried their patience to the limit, President Macron referred to the way the British had been treated to “lies and false promises“;

Michel Barnier said “a divorce is nothing to celebrate“;

So how thin is this “deal”? It has been compared by a great expert on European affairs, Brendan Donnelly of the Federal Trust, to the Cheshire cat: as you examine it, the details disappear and only the grin remains.

No-deal would have involved the imposition of crippling tariffs on major exporters such as the motor industry and further erosion of our depleted industrial base.

For which relief, much thanks. But the act of leaving the single market reimposes the non-tariff barriers removed for frictionless trade.

Johnson’s “deal” takes us from Brexit tier 4 to Brexit tier 3. It avoids a catastrophe but is still a disaster.