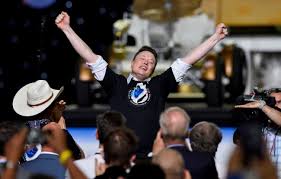 When Tesla Owners of Silicon Valley tweeted the news, Musk’s response was just six words, “How strange,” followed by “Well, back to work…” That might seem like a pretty ho-hum reaction to becoming the world’s richest person. But it was a pitch-perfect answer and a useful lesson in emotional intelligence for every leader.

You see, he knows just how random and changeable this bit of good news is, as is any news related to his companies’ share price. Tesla shares closed at more than $880 on the day, but less than two years ago they were worth about $38.

As for Musk, It’s difficult to overstate just how new his membership is among the world’s wealthiest people. He gained $150 billion — more than three-quarters of his mega-fortune — in the past year alone. It’s probably not hard for him to remember the days when he slept in the office — not so he could spend the maximum time at work, as is often the case these days, but because he couldn’t afford an apartment to go home to.

He also knows just how quickly fortunes can change, especially when they’re tied to the whims of the financial markets. Over the past few years, he’s railed against short-sellers (investors who bet on a company’s share price going down) for bad-mouthing Tesla, perhaps in a nefarious attempt to make a quick buck. He’s seen legitimate stock analysts question Tesla’s prospects and predict its doom over and over — one such firm just publicly confessed that they that it got things very, very wrong. And Musk also learned how the Securities and Exchange Commission could clip his wings, even when everything else was going right.

In other words, he’s absorbed a bit of wisdom every business leader should remember. Some days you’re the hero and other days you’re the goat and it’s a lot smarter to ignore those ups and downs in what people (and markets) think of you. Instead, do what Musk says all CEOs should do — focus on making your product “as awesome as it could be.”

If a soaring stock price, or hitting a business goal, or getting an award makes you feel like you’re on top of the world, you may come crashing down when you miss your goals, or lose a big customer, or face public criticism. The best leaders don’t take any of that too seriously. Instead, they do what Musk says he’s doing — they get back to work.