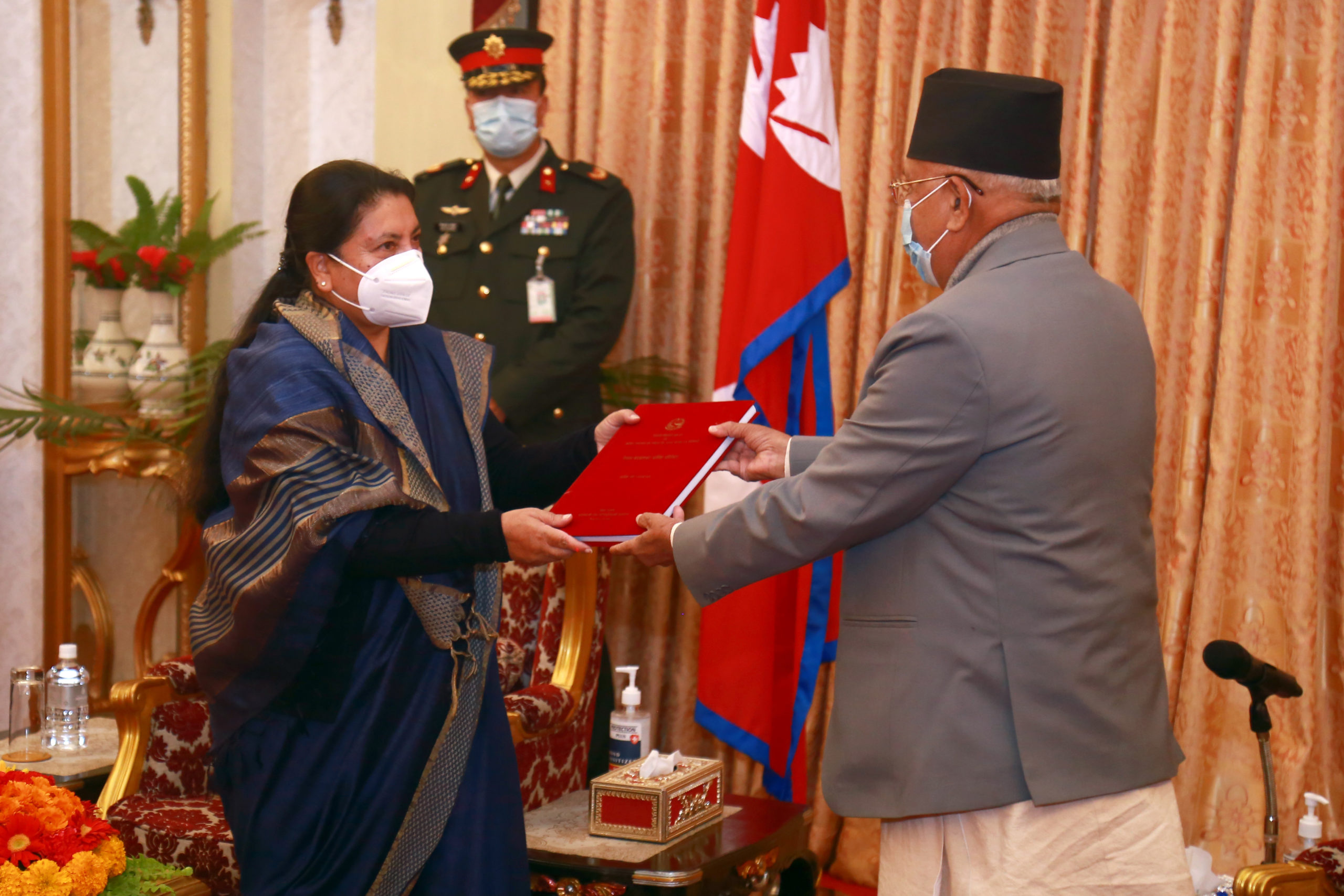 KATHMANDU: Prime Minister KP Sharma Oli has submitted the annual report of the Government of Nepal for the fiscal year 2076/77 to President Bidhya Devi Bhandari today.

He submitted the report in accordance with Article 53 of the Constitution of Nepal and Article 41 of the Good Governance (Management and Operation) Act, 2064 BS.

Prime Minister KP Sharma Oli has submitted the annual report of the Government of Nepal for the fiscal year 2076/77 to President Bidhya Devi Bhandari today.

He submitted the report in accordance with Article 53 of the Constitution of Nepal and Article 41 of the Good Governance (Management and Operation) Act, 2064 BS.

The annual report contains details of the achievements made on the implementation of the directive principles, policies and obligations of the state in accordance with Article 53 of Part 4 of the Constitution, along with the details of major work done by the Government of Nepal.

The report states that various important works have been done this year towards fulfilling the national aspiration of ‘Prosperous Nepal, Happy Nepali’ by giving priority to the sovereignty, geographical integrity, independence, national unity, national dignity, good governance and prosperity of the country.

‘Socialism-oriented democracy with all the basic features of democracy is being practised and developed. The belief that people are the source of state power has been established in true sense. Laws issued to ensure the fundamental rights and social justice of citizens have been implemented,’ the report said, adding that ‘a political and administrative map of Nepal comprising Limpiyadhura, Lipulekh and Kalapani areas has been published on the basis of the Sugauli Treaty and historical facts and evidence. With the unanimous consent of the federal parliament, the second amendment of the Constitution of Nepal has been made and the updated map and target seal of Nepal have been changed accordingly.

In the same fiscal year, the height of Everest has been measured for the first time by Nepal’s own human resources. A commission has been formed to resolve land issues. Hundreds of acres of land encroached by various individuals and organizations have been brought back in the name of the Government of Nepal.

During the same period, construction of 218 bridges, black-topping of 979 km of roads and construction of 757 km of road sections have been completed. Irrigation facilities have reached an additional 5,567 hectares of land. The population benefiting from basic drinking water facilities and high and medium level drinking water service has become 91 per cent and 23 per cent respectively, both increasing by two percentage points in this fiscal year.

Chandragadhi, Biratnagar, Janakpur, Bharatpur and Dhangadhi airports have been developed and upgraded. Under the Prime Minister’s Employment Program, 87,757 people at 701 local levels have been employed.

In line with the government’s commitment to the protection, promotion and enhancement of human rights, the government has responsibly fulfilled its obligations under the International Covenant on Human Rights.

The context of peace and security in the country has further strengthened. Zero tolerance policy has been adopted against corruption. A total of 244 cases have been filed in the court alleging revenue leakage, misappropriation of foreign exchange and illegal bill trading.

Significant improvements have been made in the areas of government budget system, accounting system and revenue management. Revenue of Rs. 793.78 billion has been collected in the fiscal year. The trade deficit is narrowed to 16.8 per cent. 20 Acts and 3 regulations have been issued. Integrated Legal Aid Policy, 2076 has been approved.

The President has paid visits to Myanmar and Japan, and the Prime Minister participated in the 18th Non-Aligned Movement Summit in Baku.

COVID-19 has had a negative impact on all sectors of the country including the economic and social. The report states that the government has succeeded in normalizing the lives of the people even amidst the pandemic, keeping it under control by adopting a clear strategy and coordinated working style.

The policy, program and budget for the Fiscal Year 2077/78 has been formulated with a preliminary assessment of the impact of the pandemic on the economy and focusing on infrastructure and capacity development, job creation and expansion and development of the health sector.

It is stated that the government is moving ahead by making maximum use of the available resources and means, taking into account the difficulties encountered during the implementation of the directive principles, policies and obligations specified in the constitution.

Similarly, as per Article 269 of the Constitution, the Prime Minister also presented the annual report of the National Security Council as its chairperson. Home Minister Ram Bahadur Thapa, Finance Minister Bishnu Prasad Poudel and Foreign Minister Pradip Kumar Gyawali were also present on the occasion.