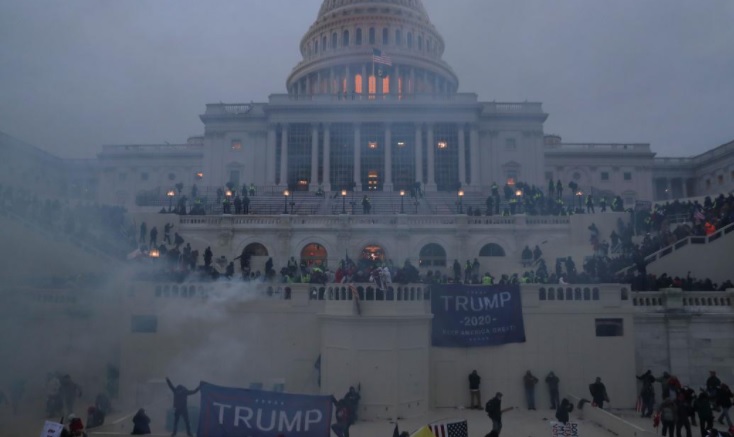 WASHINTON: Years ago, there was a movement called the Arab Spring, seemingly orchestrated by the defenders of the democracy to punish autocrats. Arab Spring disrupted, destroyed, and destabilized many countries in the name of people’s power. There were murmurs that the prominent actor pulling the strings was the ‘Global Cop’ ie Uncle Sam. The chickens have come home to roost, or Karma is indeed cyclical – or so it seems.
Shortly after 1 p.m. ET on Wednesday hundreds of pro-Trump protesters pushed through barriers set up along the perimeter of the Capitol, where they wrestled with officers in full riot gear, some calling the officers “traitors” for doing their jobs. About 90 minutes later, police said demonstrators got into the building and the doors to the House and Senate were being locked. Shortly after, the House floor was evacuated by police. Vice President Mike Pence was also evacuated from the chamber, he was to perform his role in the counting of electoral votes.
CNN has reported that an armed standoff took place at the House front door as of 3 p.m. ET, and police officers had their guns drawn at someone who was trying to breach it. A Trump supporter was also pictured standing at the Senate dais earlier in the afternoon.
A woman, who is yet to be identified, died after being shot in the chest on the Capitol grounds, DC police confirmed. More information on the shooting was not immediately available and a police spokesperson said additional details will come later. DC Police Chief Robert Contee said three other people died from medical emergencies during the riot.
“One adult female and two adult males appear to have suffered from separate medical emergencies, which resulted in their deaths. Any loss of life in the District is tragic and our thoughts are with anyone impacted by their loss,” Contee said at a news conference Wednesday night.
Multiple officers have been injured with at least one transported to the hospital, multiple sources told the network.