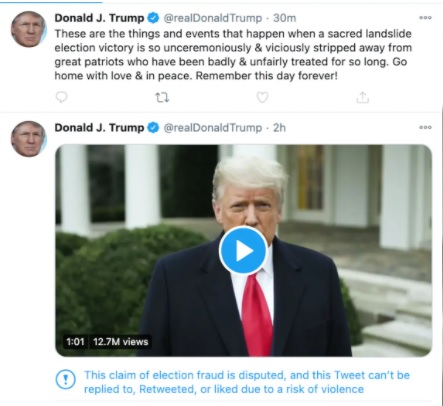 Facebook and Twitter removed President Trump’s video about Wednesday’s riots citing the risk of “violence,” as the President not-so-insidiously ignited protesters who stormed the Capitol to “go home,” on one hand, while trumpeting that the 2020 election had been “stolen.”

The president posted a taped video on Wednesday afternoon as violent protests erupted on Capitol Hill during a joint session of Congress to certify the results of the presidential election.

Twitter removed the video, as well as a second tweet, in which Trump claimed that the election was “unceremoniously & viciously stripped away from great patriots who have been badly & unfairly treated for so long,” due to its inflammatory potential.

“This is an emergency situation and we are taking appropriate emergency measures, including removing President Trump’s video. We removed it because on balance we believe it contributes to rather than diminishes the risk of ongoing violence,” Facebook Vice President Guy Rosen explained on Twitter.

Facebook initially flagged Trump’s post with a label saying: “Joe Biden has been elected President with results that were certified by all 50 states. The US has laws, procedures, and established institutions to ensure the peaceful transfer of power after an election.” Facebook later retracted the post altogether.

Facebook’s removal of Trump’s post came after Twitter flagged the same video and restricted engagement “due to the risk of violence,” Fox News reported.

Twitter’s flag on Trump’s video message stated: “This claim of election fraud is disputed, and this Tweet can’t be replied to, retweeted, or liked due to a risk of violence.”