Dinanath Sharma represented both sides of the CPN 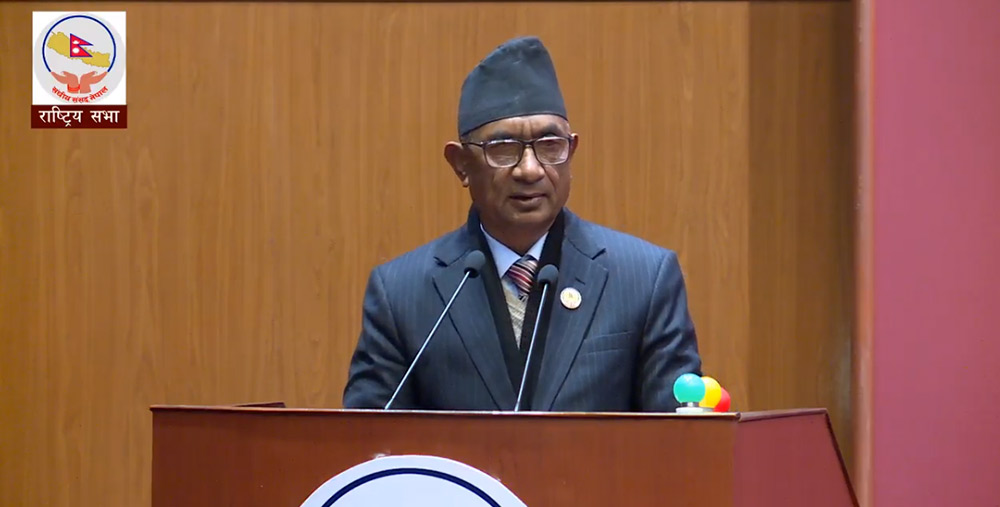 Just a day before the start of the seventh session of the National Assembly, Chairman Ganesh Prasad Timilsina had said that the issue of dissolution of the House of Representatives could not be raised in the meeting.

The issue was raised at Friday’s meeting, despite warnings from Timilsina. Dinanath Sharma, leader of the ruling Communist Party of Nepal National Assembly parliamentary party, introduced the issue at the outset.

As previously announced, President Timilsina did not call the lawmakers ‘ruling’. That is, on the first day of the meeting, as the representative of the party represented in the assembly, he did not stop what he said.

Despite the issue of dissolution of the House of Representatives in the National Assembly, the ruling CPN remained neutral on whether it was constitutional or unconstitutional.

Despite the issue of dissolution of the House of Representatives in the National Assembly, the ruling CPN (Maoist) remained neutral on whether it was constitutional or unconstitutional.

Although the CPN is politically divided into two factions (Oli and Prachanda-Madhav), Dinanath Sharma represented both the parties in the House as a united CPN.

Both the parties agreed to accept him as the leader of the party. However, Sharma himself has made a public statement that he is nowhere to be found and is neutral.

He said that his heart was torn when the National Assembly was dissolved. “I have felt a torn heart,” Sharma said. “I have never felt this way before.”

Probably because he declared himself neutral, he did not call the Prime Minister’s move to dissolve the House of Representatives constitutional-unconstitutional, democratic-undemocratic. In a sense, he remained neutral.

However, the main opposition parties in the House, the Nepali Congress and the Janata Samajwadi Party appeared aggressive. Addressing the meeting on behalf of the Nepali Congress, Jitendra Narayan Dev termed it unconstitutional and undemocratic.

“The dissolution of the House of Representatives is completely unconstitutional and undemocratic,” he elaborated. Only if the parliament fails to appoint a prime minister will it enter a phase of dissolution. ‘

MP Pramila Kumari representing Janta Samajwadi Party compared the dissolution of the parliament by the Prime Minister to the step taken by King Mahendra. “The House of Representatives, the highest body of the people, has been dissolved by the president on the recommendation of the prime minister,” she addressed.

MP Kumari said that the Prime Minister’s series of statements showed her anti-republican, anti-federal and anti-inclusive character. She also accused the Prime Minister of dissolving the parliament, leading the regressive.

She said that the trust towards women is declining due to the President’s failure to take a constitutional decision.

She said she is confident the Supreme Court would order the reinstatement of parliament.