Nepal will always be in my heart: US Ambassador Berry 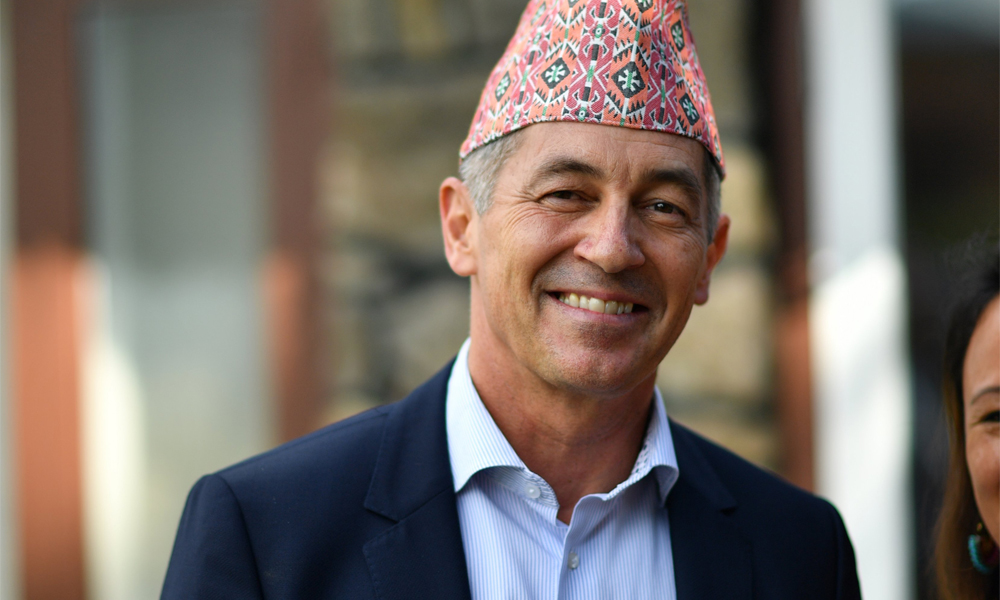 KATHMANDU: Happiness of the US Ambassador to Nepal Randy Berry knew no bounds when heritage expert Rabindra Puri presented a stone-statue of god Laxmi Narayan to him as a gift amid a function organized here today to bid a farewell to him, who is returning home a week later after completing his tenure as the Ambassador.

The gift was covered in red clothing. Ambassador Berry was visibly cheerful when he entered the building of the Nepal Vocational Academy at Kamalbinayak, Bhaktapur. The four-storey building, which was built from age-old bricks, itself looks like a museum with historic statues of various gods and goddesses inside. In the middle of the courtyard, there is a statue of Lord Buddha in a cross-legged position. Besides it, there lies a standing giant statue of a sage. There are images and statues of various gods and goddesses put up on the walls.

The Ambassador seemed happy and excited by seeing the statues of various gods and goddesses and other natural and beautiful scenes of the surroundings.

He also managed time to take a picture of himself besides the gifted statue. The Ambassador was very special at the event also by his linkage with ancient statues of gods and goddesses of Nepal.

A statue of god Laxmi Narayan that had gone missing from the Narayan Temple at Patko tole in Patan was recovered from Dallas Museum in the US. The repatriation of the recovered statue to Nepal a year ago was done at the ‘special’ initiatives of Berry. Thereafter, the statue was placed back in the temple in his presence.

So far, 17 idols of various gods and goddesses that were stolen from Nepal were recovered from various cities and museums of the US, and repatriated back to Nepal between March, 2021 and August, 2022 at the initiatives of Berry.

The farewell event was organized by the Rabindra Puri Foundation for Conservation, an organization working for the protection and conservation of stolen statues of various gods and goddesses. Various dignitaries, foreign guests, culture experts and archeologists attended the programme.

“Setting up a ‘museum of stolen arts’ in Panauti is underway. A replica of the stolen statue of Laxmi Narayan will also be put up in the museum,” said Puri, also President of the Foundation. He has also launched the campaign to repatriate stolen idols back home.

“We are very happy to be gifting a replica of the stolen statue of Laxmi Narayan to Berry.”