Pakistan appeals for more aid for 33M affected by flooding 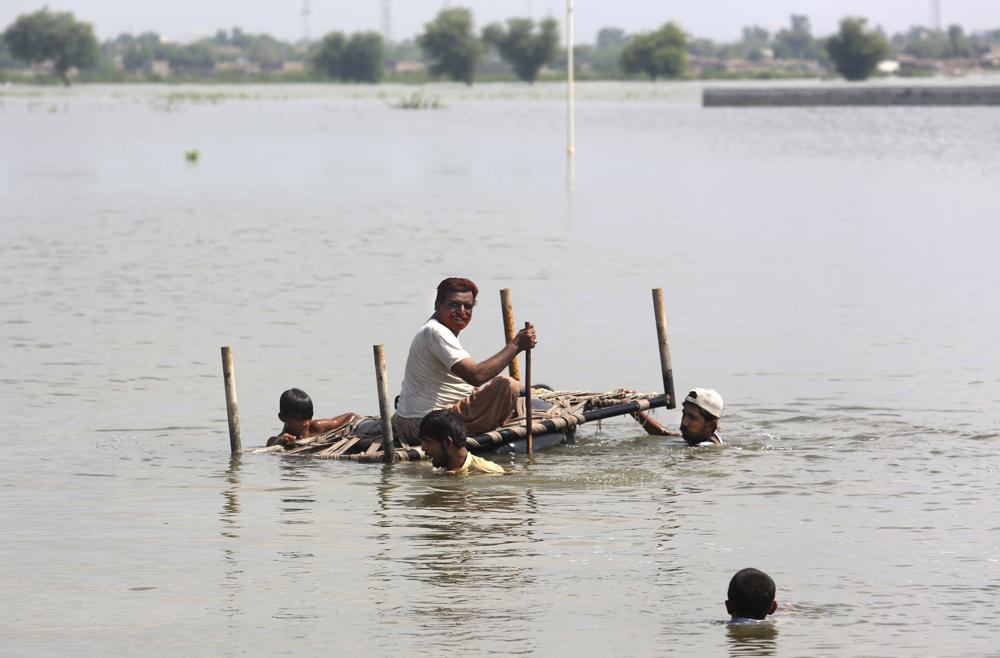 Pakistan appealed Saturday to the international community for an “immense humanitarian response” to unprecedented flooding that has left at least 1,265 people dead. The request came even as planes carried supplies to the impoverished country across a humanitarian air bridge, Associated Press reported.

Federal planning minister Ahsan Iqbal called for an “immense humanitarian response for 33 million people” affected by monsoon rains that triggered devastating floods. International attention to Pakistan’s plight has increased as the number of fatalities and homeless have risen. According to initial government estimates, the rain and flooding have caused $10 billion in damage.

“The scale of devastation is massive and requires an immense humanitarian response for 33 million people. For this I appeal to my fellow Pakistanis, Pakistan expatriates and the international community to help Pakistan in this hour of need,” he said at a news conference.

Multiple officials and experts have blamed the unusual monsoon rains and flooding on climate change, including U.N. Secretary-General Antonio Guterres, who earlier this week called on the world to stop “sleepwalking” through the deadly crisis. He will visit Pakistan on Sept. 9 to tour flood-hit areas and meet with officials.

Earlier this week, the United Nations and Pakistan jointly issued an appeal for $160 million in emergency funding to help the millions of people affected by the floods, which have damaged over 1 million homes.

Prime Minister Shahbaz Sharif’s earlier appeal for aid got a quick response from the international community, which sent planes loaded with relief goods. A French aircraft carrying relief goods landed in Islamabad on Saturday and was received by Minister for National Health Services Abdul Qadir Patel.

That French plane’s arrival followed the ninth flight from the United Arab Emirates and the first from Uzbekistan. Those flights were the latest to land in Islamabad overnight.

Patel said the relief goods sent by France included medicine and large dewatering pumps to reduce water levels. He said France has also sent a team of doctors and experts.

Pakistan has established a National Flood Response and Coordination Center to distribute the arriving aid among the affected population. Iqbal is supervising the army-led center.

The minister said rains this monsoon season have lashed most areas of Baluchistan and Sindh provinces as well as parts of Khyber Pakhtunkhwa and Punjab provinces. The Gilgit-Baltistan territory was also affected. The torrential rains and subsequent flash floods caused massive damage to infrastructure, roads, electricity and communications networks.

Iqbal said the government is working to bring normalcy back to the country as soon as possible but that the Pakistani government can’t do it alone.

Maj. Gen Zafar Iqbal, head of the flood response center and no relation to the planning minister, said in the news conference that over the last four days, 29 planes loaded with relief goods arrived in Pakistan from Turkey, the UAE, China, Qatar, Uzbekistan, Jordan, Turkmenistan and other countries.

Babar said the army has established 147 relief camps sheltering and feeding more than 50,000 displaced people while 250 medical camps have provided help to 83,000 people so far.

Health officials have expressed concern about the spread of water borne diseases among the homeless people living in relief camps and in tents alongside roads.

Lt. Gen. Akhtar Nawaz, head of the disaster management authority, said areas of the country expected to receive 15% to 20% additional rains this year actually received in excess of 400% more. Collectively, the country has seen 190% more rain this monsoon season.

The U.S. military’s Central Command has said it will send an assessment team to Islamabad to see what support it can provide. The United States announced $30 million worth of aid for the flood victims earlier this week.

Two members Congress, Sheila Jackson and Tom Suzy, were expected to arrive in Pakistan on Sunday to visit the flood affected areas and meet officials.