Pradeep Giri: the man behind the curtain 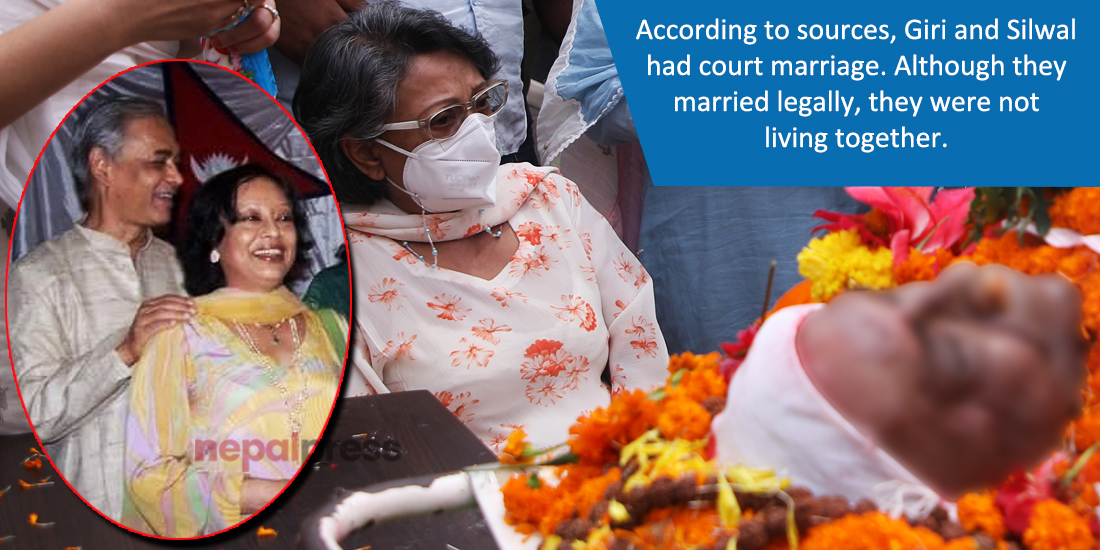 KATHMANDU: Nepali Congress leader Pradeep Giri, a socialist thinker and philosopher, is no longer with us.

Giri, a long-time Congress leader, breathed his last while undergoing cancer treatment at Nepal Mediciti Hospital in Kathmandu on Saturday night (August 20). He was 74.

Giri was admitted to the hospital last month as his health deteriorated a month after he returned from India after receiving treatment for throat cancer.

Despite being a public figure, Giri’s life rarely became the subject of public discussion. His married life still remained a mystery for many people.

Many people came to know about Giri’s wife Bharati Silwal only after the former’s death.

According to sources, both of them had a court marriage. This was the second marriage of Silwal, daughter born to an Indian father and a Nepali mother.

Although they married legally, they were not living together. Silwal used to work at Radio Nepal in the beginning. Later, she started working at the United Nations.

Giri and Silwal had no children. Silwal has a son named Santosh from her first husband. Giri had accepted Santosh as his adopted son.

Giri wanted to build a hospital in Lahan but his plan remained incomplete after he fell ill in a short time.

The intellectual leader had established an ashram on the 17 bigh land which he had received from his father. The ashram is on the banks of the local Khutti river in Lahan.

Currently, there are 100 children living in the ashram.

Mediciti hospital did the treatment free of cost

Giri was brought to Kathmandu from India and admitted to the Mediciti Hospital in Lalitpur on 10th July after it was confirmed that his cancer cannot be cured.

He received the treatment at the hospital for about a month free of cost.

Upendra Mahato, the owner of the hospital, had directed the hospital administration not to collect any money for Giri’s treatment.

Mahato, who came from abroad four days after Giri’s admission, had said that Giri is like his father and that all treatment will be free.

As Giri’s health started getting critical, many leaders of the Nepali Congress rushed to the hospital to meet him.

Prime Minister and Nepali Congress President Sher Bahadur Deuba met Giri in the hospital but could not have a conversation as Giri was not in a state to speak.

Nepali Congress General Secretary Gagan Thapa, however, had a chance to have a talk with Giri.

According to a source, Giri said to Thapa, “I support your intention to become the prime minister. Speak for the youth. Make the party stronger”.

Throat cancer was cured, but

Giri had gone to Mumbai for prostate surgery around 10 years ago.

He used to go to Delhi or Patna every six months for a health check-up due to diseases like diabetes and thyroid.
Around two years ago, Giri was suspected of having throat cancer during a regular check-up in Patna.

Giri recovered from the disease after he was taken to Apollo Hospital in Mumbai from Hinduja hospital in Delhi where he received treatment for around six months.

He, however, started having issues in stomach.

After a video X-ray, a suspicious lump was seen in Giri’s abdomen. Doctors suggested he have a CT scan.

The CT scan showed that the cancer had spread to the heart and lungs.

Giri was taken back to Nepal after the doctors said that the current cancer has reached a stage where it cannot be cured.

He was admitted to the Mediciti Hospital soon after his return to Kathmandu.

Among the Nepali leaders, Giri was the trustworthy of the Indian Embassy. He had a close relationship with the Embassy.

The Embassy trusted him more than the Madhesi leaders of Nepal.

Giri had worked with the Indian Embassy to provide financial support to many organisations in Nepal.

With his recommendation, many Madhesi students in Nepal have got scholarships to study in India.

According to a source, even when Giri was admitted to the Medicity Hospital, he had recommended a financially weak Madhesi student to the embassy over the phone.

The embassy had given him a quota of 3-4 students without any public announcement.

Giri used to tell his close friends about his plan to leave politics and spend the rest of his life in the Ashram.

He wanted to make the orphanage that he has been running for 10 years more prosperous.

He had thought of making a hospital after shifting the ashram to Lahan.

Many people know Pradeep Giri as an idealistic leader.

He was not in the favour of caste discrimination and used to treat everyone equally from workers to industrialists.
Even though he was the leader of the Nepali Congress, his views were very similar to the communists, especially the Maoists.

Giri’s well-wishers see him as studious, intellectual and socialist leader whereas his critics portray him as communal and a leader in favour of India.

Whatever the opinion of the people towards Giri, his death has created an empty space in the history of Nepali politics.