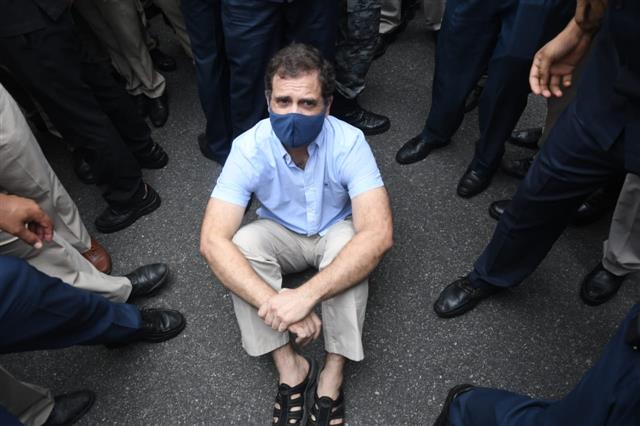 Congress interim president Sonia Gandhi on Tuesday went to the office of the Enforcement Directorate in Delhi for the second round of questioning in connection with the National Herald-money laundering case, Hindustan Times reported.

As part of the planned protest, Congress MPs marched from the Gandhi Statue on the Parliament premises towards Vijay Chowk. Several of them, including Rahul Gandhi, Mallikarjun Kharge, Ranjeet Ranjan, KC Venugopal, Manickam Tagore, Imran Pratapgarhi and K Suresh were detained during the march.

The Congress leadership has planned a ‘satyagrahs’ (peaceful protests) across the national capital and elsewhere in protest against the interrogation. The Delhi Police has denied the party permission to agitate at the Raj Ghat and imposed Section 144 of the Criminal Procedure Code in the area.

Earlier, Rahul Gandhi and Priyanka Gandhi Vadra accompanied their mother to the ED office. Rahul Gandhi has been questioned extensively in the same case recently.

Congress MPs met at the office of Leader of Opposition Mallikarjun Kharge on Parliament premises and are likely to stage a march towards the ED office to protest against the questioning.

Workers of the All India Mahila Congress have begun their stir outside the party headquarters in Delhi.

Gandhi was earlier questioned for a few hours on Thursday last week and Congress leaders had staged a protest across the country. Party MPs had also courted arrest in Delhi against her questioning.