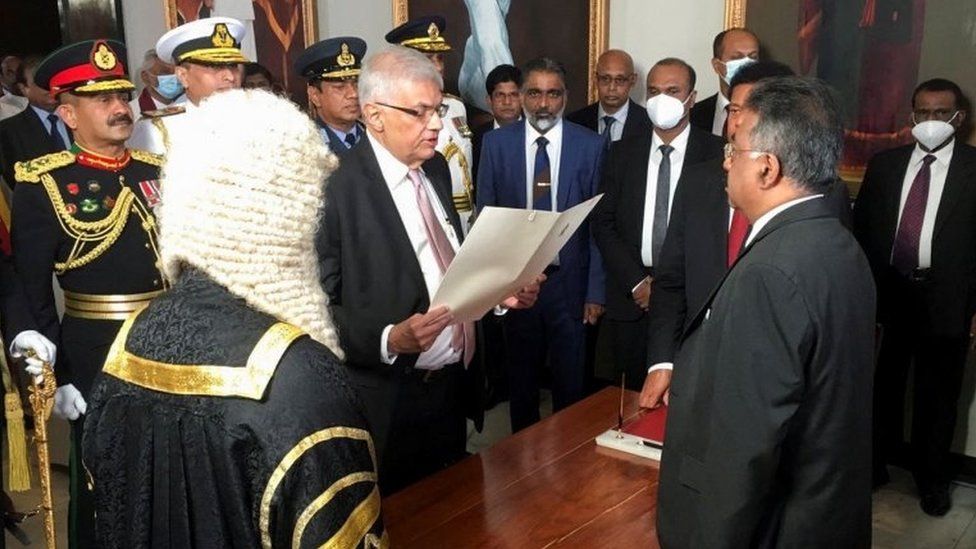 Sri Lanka’s Ranil Wickremesinghe has been sworn in as president, amid hopes that he will pull the country out of its economic suffering, BBC reported.

The 73-year-old took his oath at the tightly-guarded parliament complex on Thursday.

Mr Wickremesinghe – the former prime minister – is seen as deeply unpopular with the public, but some protesters have said they will give him a chance.

Sri Lanka is currently in the grip of mass unrest over an economic crisis.

Many blame the Rajapaksa administration for mishandling the crisis and see Mr Wickremesinghe as part of the problem – but there were few demonstrations on the streets the day after Mr Wickremesinghe won the parliament vote.

However security remained tight around government buildings in the capital.

“He is here – and we will see what his actions are. If we don’t get any food, any medicine, we’ll be on the streets,” said one woman who had joined protests last week.

Mr Wickremesinghe won a strong majority of the vote from lawmakers with the backing of the ruling party – the Sri Lanka’s People’s Front (SLPP).

He defeated his main rival for the job, Dullus Alahapperuma, a dissident ruling party MP with the support of the opposition- with 134 votes to 82.

Mr Wickremesinghe is aiming to restore political stability so the country can resume negotiations with the International Monetary fund for a bailout package.

He told parliament the nation was “in a very difficult situation” and there were “big challenges ahead”.

However in the aftermath of the vote, many expressed despair and disappointment over his win.

“I am absolutely disgusted at the result… I cannot believe that 134 people – MPs that are supposed to represent the people- have completely disregarded the wants of the people,” activist Jeana De Zoysa told the BBC.
Sri Lanka has been wracked with protests for months because the country is effectively bankrupt and facing acute shortages of food, fuel and other basic supplies.

Tens of thousands of protesters had last week marched in the streets of Colombo calling for the ex-president Gotabaya Rajapaksa and Mr Wickremesinghe to resign.

Mr Rajapaksa fled the country in the early hours of 13 July after the protesters stormed and occupied his political residence. He flew to the Maldives and then Singapore, from where he issued his official resignation.

However Mr Wickremesinghe did not resign – though he had initially offered to – and instead accepted the position of Acting President when Mr Rajapaksa fled.

When he assumed the job of acting president last week, he ordered the military to do whatever was necessary to restore public order, following protesters storming and occupying government buildings.

He also extended a national state of emergency order this week to stamp out any flare-ups.

A former six-time prime minister, Mr Wickremesinghe failed in his previous two runs for the presidency. His victory on Wednesday means he will serve out the rest of the presidential term until November 2024.