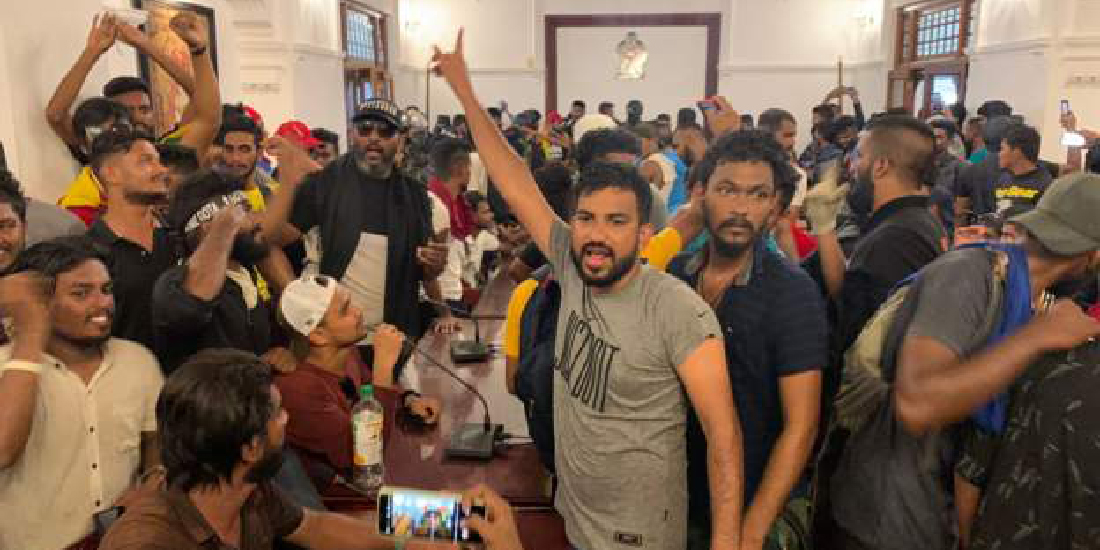 Sri Lanka’s political and economic crisis escalated as protesters stormed the prime minister’s office on Wednesday, demanding the country’s leaders step down after President Gotabaya Rajapaksafled to the Maldives without resigning, CNN reported.

Rajapaksa had been expected to formally resign Wednesday but instead left the crisis-hit nation and appointed Prime Minister Ranil Wickremesinghe as its acting leader, citing a section of the constitution that allows a prime minister to “discharge the powers, duties and functions of the office of president” when the president is ill or “absent” from Sri Lanka.

Wickremesinghe was also due to formally resign “to make way for an all-party government.”

The move further enraged protesters, who want both leaders to vacate their roles as the country’s 22 million people struggle to buy basic goods, fuel and medicine.

Hundreds of demonstrators breached the compound of the prime minister’s office in Sri Lanka’s largest city Colombo on Wednesday and entered the premises, according to footage from the scene and local witnesses.

The grounds have now been taken over by protesters who are gathering in celebration, following a standoff with armed police at the gates of the property.

People could be seen on the balcony of the property, lighting firecrackers and waving the Sri Lankan flag, according to witnesses.

Demonstrators outside demanded that neither the President nor the Prime Minister “be spared.”

This follows months of escalating anger over the economic crisis, with Rajapaksa accused of high-level corruption and mismanagement that ultimately bankrupted the country.

As demonstrators took to the streets, acting President Wickremesinghe appointed a committee of senior armed forces commanders headed by the Chief of Defense Staff Lt. Gen. Shavendra Silva to “restore law and order” in the nation, a high-ranking military official told CNN Wednesday.

Wickremesinghe declared a state of emergency across Sri Lanka and a curfew on Wednesday only to later cancel both orders, according to the prime minister’s office.

In Colombo, a handful of protesters also entered the premises of state broadcaster Sri Lanka Rupavahini on Wednesday, negotiating a “deal” with broadcast staff to not give airtime to politicians such as Wickremesinghe.

At the prime minister’s office, demonstrators waving the Sri Lankan flag thronged the building and celebrated on the balcony of the property after a standoff with the police, according to eyewitnesses and footage from the scene.