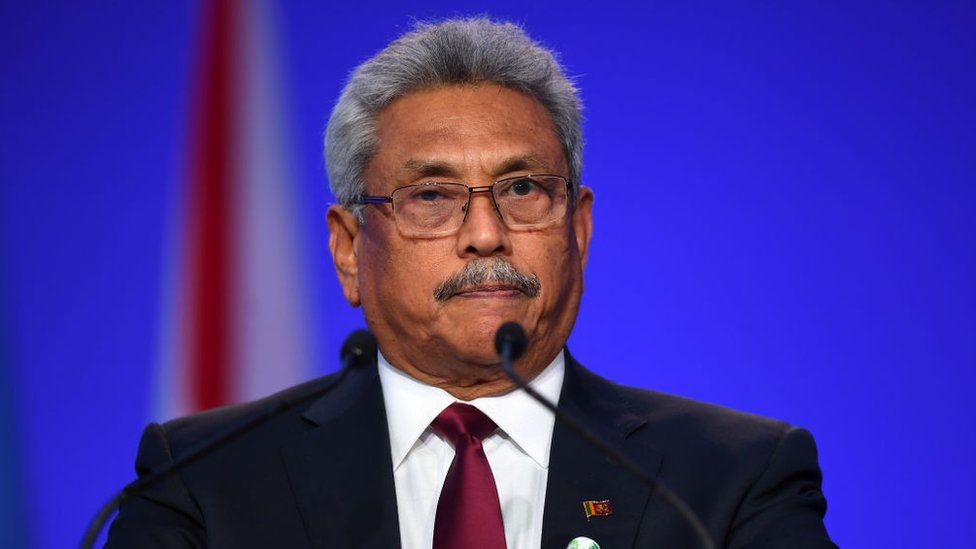 Demonstrators are still occupying the presidential palace and prime ministerial residence and have refused to leave until the leaders step down.

The parliament speaker said on Saturday the president would resign on 13 July.

But many protesters were strongly sceptical of the announcement.

On Monday, Prime Minister Ranil Wickremesinghe’s office said in a statement it had been officially informed by Mr Rajapaksa that he would step down on Wednesday. However, there has been no direct word from Mr Rajapaksa.

Under Sri Lanka’s constitution, his resignation can only formally be accepted when he resigns by letter to the parliament speaker – which has yet to happen.

Mr Rajapaksa’s location is currently undisclosed but military sources have told the BBC he is on a navy vessel in Sri Lankan waters.

His brother, former Prime Minister Mahinda Rajapaksa, is on a naval base in the country, the sources say.

Thousands descended on the capital on Saturday demanding the president’s resignation after months of protests.

Mr Rajapaksa has been blamed for the country’s economic mismanagement, which has caused shortages of food, fuel and medicine for months.

Protesters inside the palaces have refused to budge until both leaders leave office.

“Our struggle is not over,” student protest leader Lahiru Weerasekara said, quoted by AFP. “We won’t give up this struggle until [President Rajapaksa] actually leaves,” he said.

“The next couple of days are going to be extremely uncertain times as to see what transpires politically,” political analyst and human rights lawyer Bhavani Fonseka told Reuters, adding that it would be interesting to see if the two leaders “actually resign”.

The speaker of Sri Lanka’s parliament told the BBC World Service Newshour programme that a new cross-party coalition government must be formed within a week of the president officially stepping down.

“The Covid pandemic has created havoc in the country economically so we had to spend all our money on vaccinations,” he said.