Calm in Sri Lanka as president, premier to quit over economic collapse 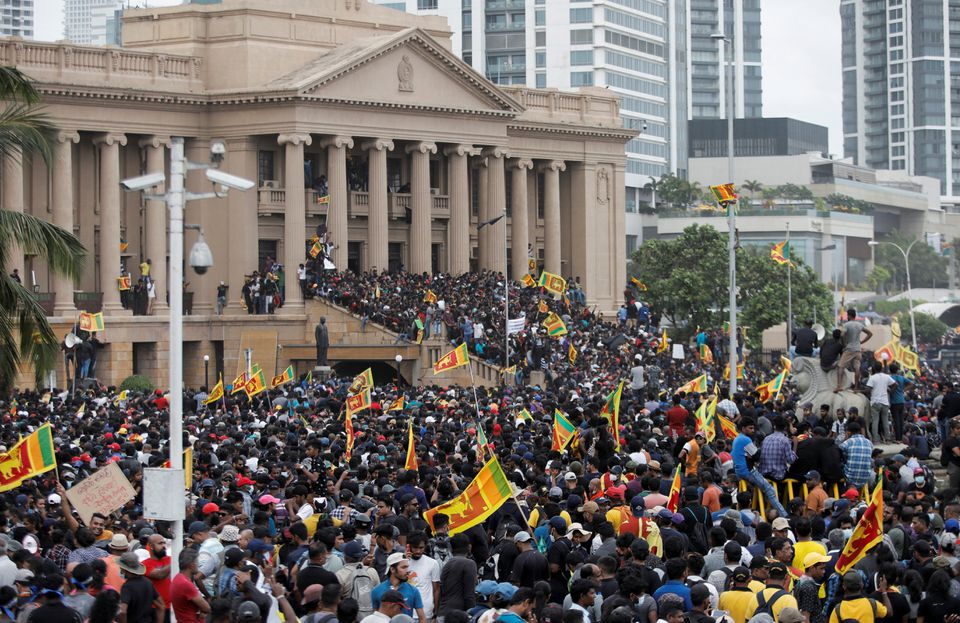 Calm returned to the streets of Sri Lanka’s commercial capital Colombo on Sunday and protesters were jubilant as President Gotabaya Rajapaksa agreed to resign after his house was stormed amid outrage over the South Asia nation’s collapsing economy, Reuters reported.

Protesters, many wrapped in the Sri Lanka flag, swarmed into his whitewashed colonial-era residence on Saturday, jumped into the swimming pool and sat on a four-poster bed. Others set fire to the private home of Prime Minister Ranil Wickremesinghe, who also agreed to resign to make way for an all-party government.

Rajapaksa, a hero of the quarter-century civil war against Tamil rebels, plans to resign on Wednesday, the parliament speaker said.

Thousands had descended on the seaside city demanding Rajapaksa resign after months of mismanaging the crisis, a dramatic escalation of largely peaceful anti-government protests on the island that sits near key shipping lanes.

On Sunday protesters were still milling about in the president’s residence, parts of which had been smashed.

Some took selfies of the polished interiors, a striking contrast to the misery many have endured. The nation of 22 million people is short of food and fuel, and inflation hit a record 54.6% in June.

It has been compounded by large and growing government debt, rising oil prices and a ban on importing chemical fertilisers last year that devastated agriculture. The fertiliser ban was reversed in November.

Rajapaksa’s “decision to step down on 13 July was taken to ensure a peaceful handover of power,” Speaker Mahinda Yapa Abeywardena said in a video statement on Saturday. “I therefore request the public to respect the law and maintain peace.”

Wickremesinghe, a six-time premier also seen as part of an uncaring ruling elite, agreed to step down, his office said. Local news channels showed a huge fire and smoke coming from his home in an affluent Colombo suburb.

Neither Rajapaksa nor Wickremesinghe were in their residences when the buildings were attacked.

Rajapaksa had left on Friday as a precaution before the planned demonstration, two defence ministry sources said. Reuters could not immediately confirm his whereabouts.

Details of a transition of power were not yet clear. The speaker had outlined proposals from a meeting of political parties on Saturday that would include parliament picking an acting president within a week.

The International Monetary Fund, which has been in talks with the Sri Lankan government for a possible $3 billion bailout, said on Sunday it was monitoring the situation closely.

“We hope for a resolution of the current situation that will allow for resumption of our dialogue on an IMF-supported program,” the global lender said in a statement.

It said it was deeply concerned about the impact of the economic crisis on the people.