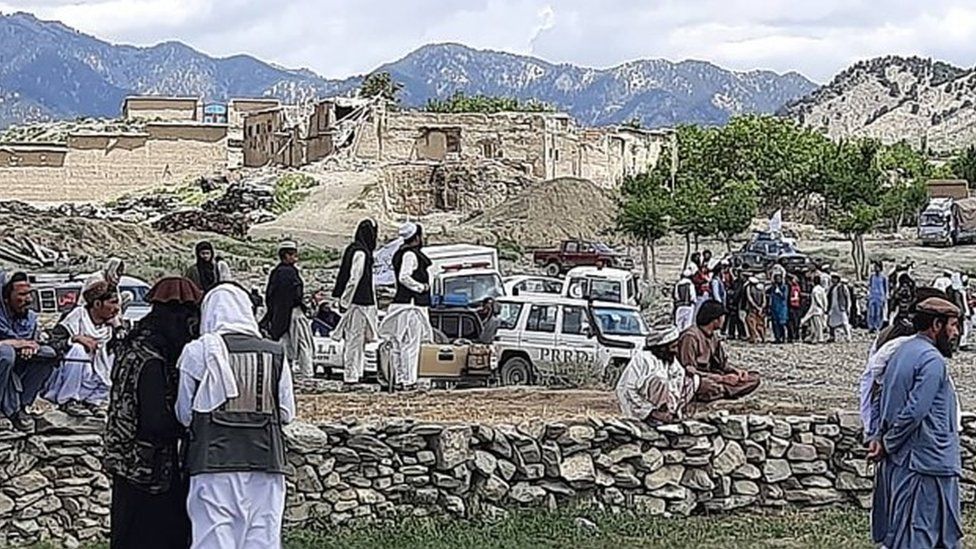 The Taliban in Afghanistan have appealed for international support, as the country deals with the aftermath of a devastating 6.1 magnitude earthquake, BBC reported.

More than 1,000 people have been killed and at least 1,500 injured. Unknown numbers are buried in the rubble of ruined, often mud-built homes.

South eastern Paktika province has been worst-hit and the UN is scrambling to provide emergency shelter and food aid.

Rescue efforts are being hampered by heavy rain and lack of resources.

Survivors and rescuers have told the BBC of villages completely destroyed near the epicentre of the quake, of ruined roads and mobile phone towers – and of their fears that the death toll will rise further.

The deadliest earthquake to strike the country in two decades is a major challenge for the Taliban, the Islamist movement which regained power last year after the Western-backed government collapsed.

The earthquake struck about 44km (27 miles) from the city of Khost and tremors were felt as far away as Pakistan and India.

Afghanistan is in the midst of a humanitarian and economic crisis, and Abdul Qahar Balkhi, a senior Taliban official, said the government was “financially unable to assist the people to the extent that is needed”.

Aid agencies, neighbouring countries and world powers were helping, he said, but added: “The assistance needs to be scaled up to a very large extent because this is a devastating earthquake which hasn’t been experienced in decades.”

The head of the United Nations, António Guterres said the agency had “fully mobilized” over the disaster. Health teams, medical supplies, food, and emergency shelters were en route to the quake zone, UN officials said.

Most of the casualties so far have been in the Gayan and Barmal districts of Paktika. A whole village in Gayan has reportedly been destroyed.

“There was a rumbling and my bed began to shake”, one survivor, Shabir, told the BBC.

“The ceiling fell down. I was trapped, but I could see the sky. My shoulder was dislocated, my head was hurt but I got out. I am sure that seven or nine people from my family, who were in the same room as me, are dead”.

A doctor in Paktika said medical workers were among the victims.

“We didn’t have enough people and facilities before the earthquake, and now the earthquake has ruined the little we had,” the medic said. “I don’t know how many of our colleagues are still alive.”

Communication following the quake is difficult because of damage to mobile phone towers and the death toll could rise further still, a local journalist in the area told the BBC.

“Many people are not aware of the well-being of their relatives because their phones are not working,” he said. “My brother and his family died, and I just learned it after many hours. Many villages have been destroyed.”

Afghanistan is prone to quakes, as it is located in a tectonically active region, over a number of fault lines including the Chaman fault, the Hari Rud fault, the Central Badakhshan fault and the Darvaz fault.

Over the past decade more than 7,000 people have been killed in earthquakes in the country, the UN’s Office for the Co-ordination of Humanitarian Affairs reports. There are an average of 560 deaths a year from earthquakes.

Most recently, back-to-back earthquakes in the country’s west in January killed more than 20 people and destroyed hundreds of houses.

Even before the Taliban takeover, Afghanistan’s emergency services were stretched to deal with natural disasters – with few aircraft and helicopters available to rescuers.

But more recently, the country has experienced a shortage of medical supplies.

According to the UN, 93% of households in Afghanistan suffer food insecurity. Lucien Christen, from the Red Cross, said Afghanistan’s “dire economic situation” meant “they’re [Afghan families] not able to put food on the table”.