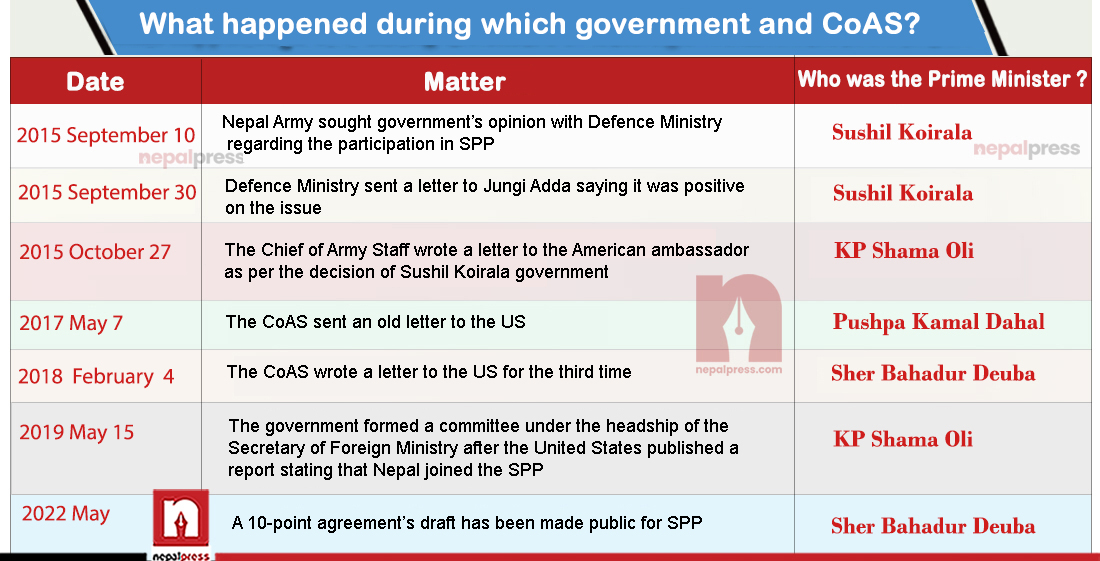 KATHMANDU: At a time when the political parties are blaming each other on the US military aid State Partnership Program (SPP), attempts are also being made to drag the Nepal Army into controversy.

Saying that some elements are trying to involve Nepal Army into the partisan political interests, high ranking army officials during a meeting held at the Jungi Adda held on Friday expressed their dissatisfaction.

Stating that the Nepal Army has not agreed to join the SPP yet and the then government had also not made the decision, the Nepal Army said that Nepal has not asked any help from the United States except for assistance during the 2015 devastating earthquake.

It has been learnt that the issue of SPP came to light when Sushil Koirala, KP Sharma Oli, Pushpa Kamal Dahal and Sher Bahadur Deuba were the prime minister of the country.

When KP Sharma Oli became the Prime Minister for the second time, the process to endorse the SPP was postponed by forming a task force after it was said that the SPP is a part of the Indo Pacific strategy.

Later, when Sher Bahadur Deuba became the Prime Minister, a 10-point pact came out saying that Nepal would join the SPP.

It has become a hotly debated topic lately.

Saying that Nepal had decided to take part in the SPP when KP Oli was the Prime Minister, the Nepal Army not only condemned the issue but also suspended the task force.

The Jungi Adda had sought the opinion of the Defence Ministry on the SPP when Rajendra Chhetri was appointed as the Chief of Army Staff on September 10, 2015.

Sushil Koirala was the prime minister then and he had also been taking the responsibility of the Defence Ministry.

The then Chief of Army Staff wrote a letter to the US saying that Nepal wanted to be a part of the SPP.

Nevertheless, the letter became a matter of debate and the Nepal Army said that it was against joining  the SPP.

The US rejected the letter. It has been learnt that the letter was sent abruptly on May 7, 2017.

It has been found that the  Chief of Army Staff sent a letter for the third time on February 4, 2016. Sher Bahadur Deuba was the prime minister then. The United States, however, did not accept the letter and did not even send the letter of acceptance.

When the United States published a report on May 15, 2019 saying that SPP is a part of the Indo Pacific Strategy, the government immediately sought information from the army after it was mentioned that Nepal was also a part of this.

KP Sharma Oli was the Prime Minister then and Ishwor Pokharel was the Defence Minister.

Following the report of the United States, a task force was formed under the headship of the Secretary of the Foreign Ministry to find out the truth.

The task force said that Nepal was against the US report.

The 10-point draft was made public on the eve of Prime Minister Sher Bahadur Deuba and Chief of Army Staff Prabhu Ram Sharma’s US visit. It’s authenticity has also been questioned.

The government has been saying that it would not take part in the SPP.

The International Relations Committee of the House of Representatives has directed the government to submit all the documents related to the SPP within a week.