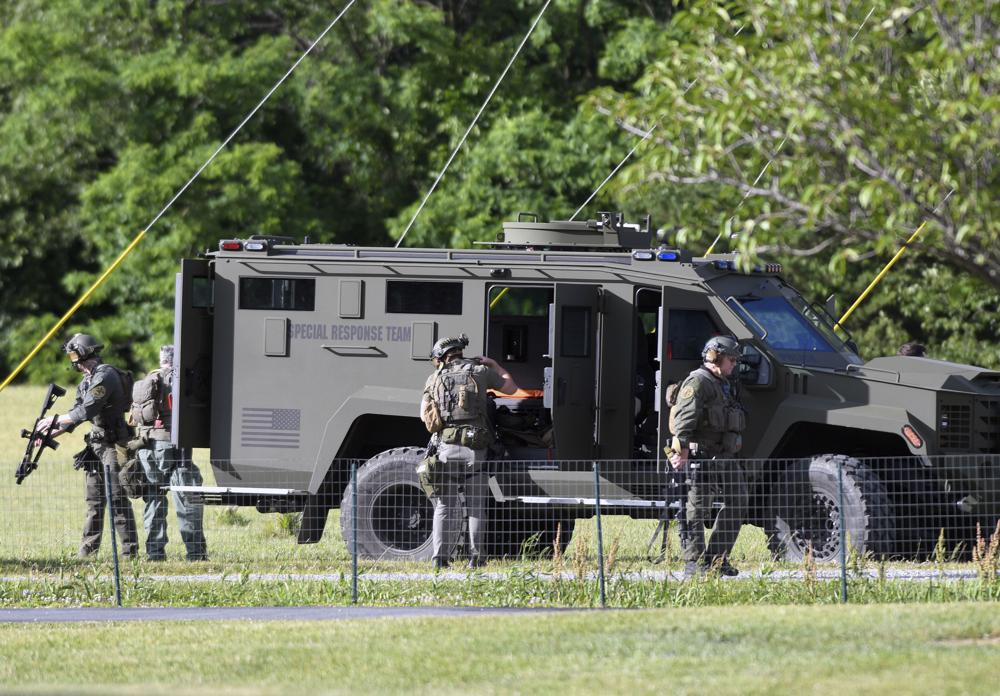 An employee opened fire at a manufacturing business in rural western Maryland on Thursday, killing three coworkers before the suspect and a state trooper were wounded in a shootout, authorities said, Associated Press reported.

Washington County Sheriff Doug Mullendore said that three victims were found dead at Columbia Machine Inc. in Smithsburg and a fourth victim was critically injured. The sheriff said at a news conference that the victims and suspect were all employees at the facility.

The suspect fled in a vehicle before authorities arrived at the scene and was tracked down by Maryland State Police, Mullendore said. The suspect and a trooper were wounded in an exchange of gunfire, according to the sheriff.

Mullendore said the suspect was a 42-year-old man but declined to release his name while criminal charges were being prepared.

Authorities declined to release a motive.

“We’re still working with sheriff’s office on what happened and why it kept escalating,” Dofflemyer told reporters.

Mullendore said the suspect used a semiautomatic handgun, which was recovered after the shootout. He declined to specify the caliber or model.

Family members of workers at the manufacturer were gathering at a fire station in downtown Smithsburg on Thursday evening, awaiting information on their loved ones. They declined to speak to a reporter.

Several hours after the shooting, numerous law enforcement officers remained at the scene. Police had closed off the road that runs past the Columbia Machine Inc. facility, and yellow tape blew in the wind outside the business.

Smithsburg, a community of nearly 3,000 people, is just west of the Camp David presidential retreat and about 75 miles (120 kilometers) northwest of Baltimore. The manufacturing facility was in a sparsely populated area northeast of the town’s center with a church, several businesses and farmland nearby.

U.S. Sen. Chris Van Hollen, a Maryland Democrat, lamented the loss of life in his state so soon after other recentshootings and vowed action.

“Today’s horrific shooting comes as our state and nation have witnessed tragedy after tragedy, and it’s got to stop,” he said in a statement. “We must act to address the mass shootings and daily toll of gun violence on our communities.”

David Creamer, 69, is a member of Smithburg’s volunteer fire department and has lived in town since 1988. He saw alerts related to the shooting go out shortly before 3 p.m.

Creamer said the last fatal shooting that he can recall in Smithsburg was roughly a decade ago.

“This stuff doesn’t happen here,” Creamer said. “Everybody pretty much knows everybody. It’s a family atmosphere. We watch out for each other.”

Creamer was chatting with neighbors at a Little League game on Thursday evening. He wore a T-shirt promoting a gun rights organization.

The shooting “makes me feel even stronger about it. I just feel that I should be able to protect my family and my neighbors. In a community like this, everybody is your neighbor,” he said.

Funeral home employee Ashley Vigrass, 29, lives less than a mile (kilometer) from where the shooting occurred. She was home with her two children when her fiancée called to tell her about the shooting and urged her to keep the kids inside the house.

“The helicopters were out,” she said.

Asked if she was shaken by the shooting, Vigrass said, “I feel like we come from a desensitized era.”

“You feel something, but it’s the same thing that you felt yesterday,” she added as she watched the Little League game. “It’s unfortunate, but you just got to make sure the kids are safe to play baseball and carry on.”