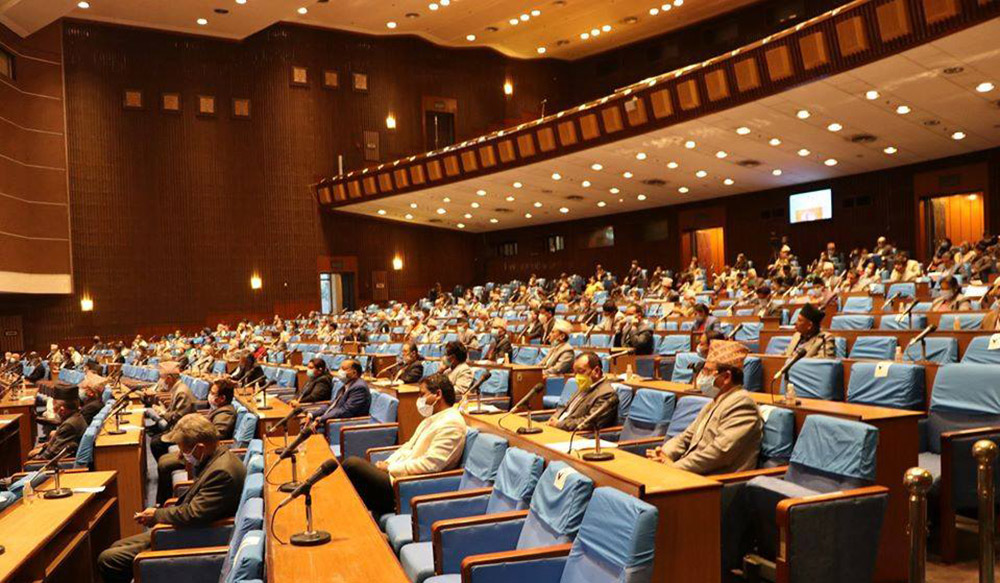 KATHMANDU: A meeting of the House of Representatives (HoR) today passed a proposal to seek considerations over a bill to amend some acts relating to the criminal offence and criminal procedure- 2079 BS.

The proposal presented by Minister for Law, Justice and Parliamentary Affairs, Govinda Prasad Sharma Koirala was unanimously passed by the meeting. Responding to queries raised by lawmakers during the discussions on the proposal, the Minister said the bill aimed to rise above the provision of compensation and to ensure repatriation to survivors.

As the Minister explained, internationally laws regarding criminal offences were being formulated through a new approach, the provision of reparation had been implemented and the government had tried to assimilate this trend.

He made it clear that just compensation was not enough to patch up damages and harms to survivor and the government was aware that its special attention was required not to let such incidents reoccur.

According to the Minister, the government has a policy of dealing with serious nature of crime and incidences of human rights violation seriously. He was hopeful of broader discussions on the issue during the clause-wise deliberations on the bill.

Prior to this, lawmaker Pushpa Bhusal Gautam demanded further clarifications on the act against acid for easy livelihood of survivors.

Binda Pandey apprised the House that woman was becoming the target of acid attack just for refusing to accept a love proposal. She demanded stricter measures in the production and supply of acid, stringent action against perpetrator(s) and proper justice to survivor(s).

Prakash Snehi voiced for controlling the acid market by a law while Shibamaya Tumbahangphe said the incumbent government coming up with the bill to recognise measures taken by the previous government through an ordinance was welcoming.

Durga Kumari BK, Dr Dila Sangroula Pant, and Prem Suwal sought the measures against the unchecked acid market and the guarantee of easier livelihood of survivor.