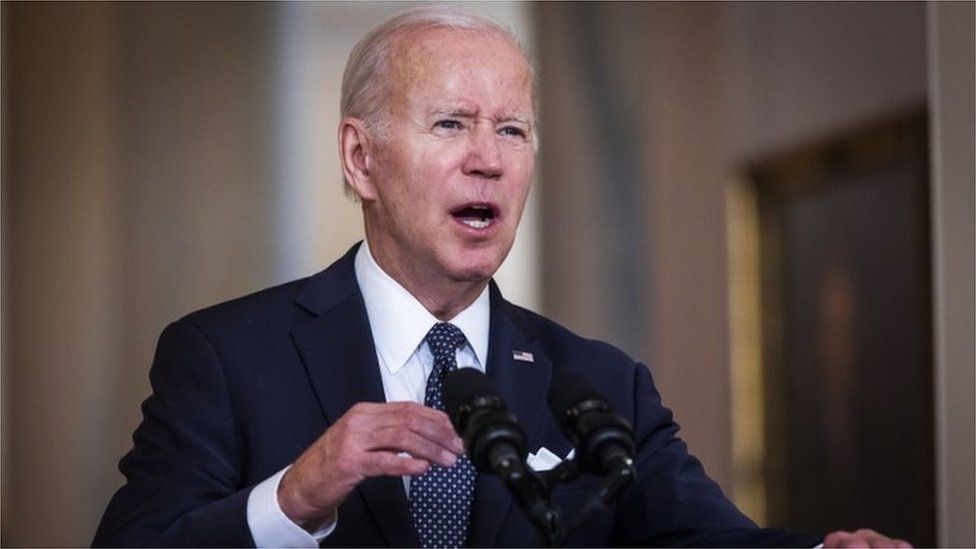 President Joe Biden has said the US should ban assault-style weapons and high-capacity magazines to tackle the “carnage” of gun violence, BBC reported.

In a primetime speech to the nation from the White House, Mr Biden said too many everyday places in America had become “killing fields”.

He said if Congress cannot outlaw such weapons, it should seek to raise the age to buy them from 18 to 21.

Mr Biden spoke after a string of mass shootings in the country.

In remarks from the White House, he also called for expanding federal background checks and nationwide red flag laws, which allow law enforcement to remove weapons from anyone deemed dangerous.

But the prospects for Congress passing any gun control measures look uncertain, and the US Supreme Court could instead be poised to expand Americans’ gun rights in a landmark case that justices are considering.

“This is not about taking away anyone’s guns,” said Mr Biden.

“This isn’t about taking away anyone’s rights,” he added. “It’s about protecting children.”

“Why in God’s name should an ordinary citizen be able to purchase an assault weapon that holds 30-round magazines, that let mass shooters fire hundreds of bullets in a matter of minutes?” the Democratic president continued.

Mr Biden touted a 1994 ban on assault-style weapons that he helped pass. It lapsed after 10 years, and debate has raged ever since over whether it was effective in reducing gun violence.

His remarks come in the wake of mass shootings in Buffalo, New York, Uvalde, Texas, and Tulsa, Oklahoma.

Even as he prepared to speak on Thursday, multiple people were shot in an attack at a cemetery in Racine, Wisconsin.

Private gun ownership is enshrined in the Second Amendment of the US Constitution.

The extent of congressional gridlock on the issue was underscored earlier in the day during a hearing on Capitol Hill.

Congressman Greg Steube, a Florida Republican, joined the hearing from his home via Zoom.

He displayed several handguns from his personal collection that he said would be banned if the legislation was passed.

A Democrat from Texas interjected to say: “I hope the gun is not loaded.”

Mr Steube replied: “I’m at my house. I can do whatever I want with my guns.”

“How dare you. You think we don’t have hearts?” he added.

The Democratic-led Protecting Our Kids Act combines eight different gun control bills, and includes many of the proposals Mr Biden spoke of on Thursday.

The bill may pass the House next week, but is not expected to clear the Senate.

One possible area of bipartisan agreement on a modest gun control measure may be expanded red flag flaws. Senators from both parties met on Thursday for the second time to discuss that idea.

Meanwhile, the US Supreme Court is deliberating on one of the nation’s most restrictive gun laws, in New York, that places tight restrictions on who can carry a gun in public.

If the justices strike down the law, as their comments in a November hearing suggested might happen, state-level bans across the nation on assault-style weapons and high-capacity magazines could end up being overturned.

According to the Gun Violence Archive, there have been 233 mass shootings in the US so far this year. It defines a mass shooting as an incident in which four or more people are shot or killed, excluding the shooter.