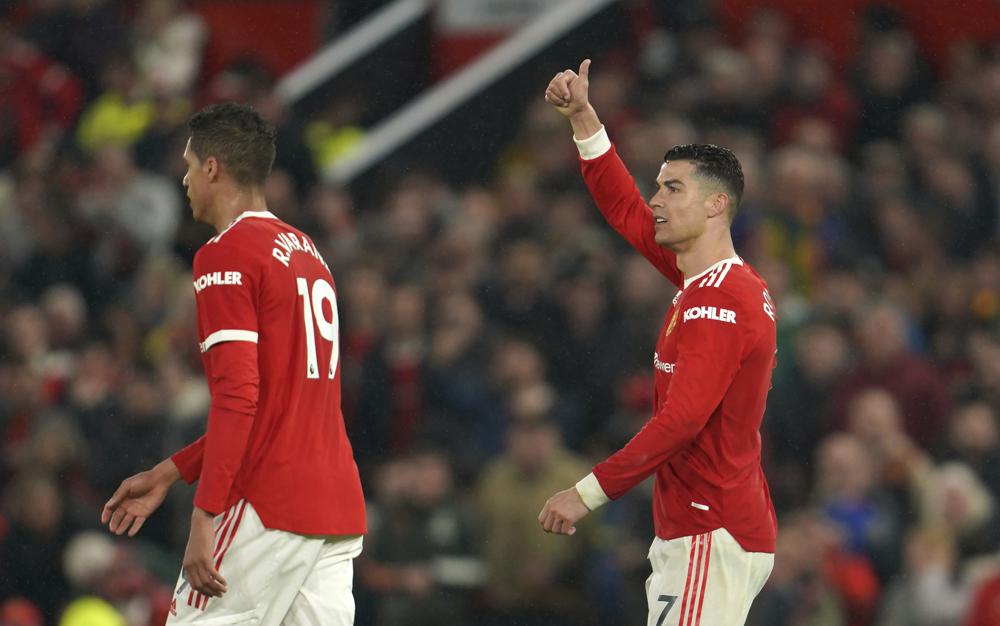 Cristiano Ronaldo continues to be the shining light in an otherwise disappointing season for Manchester United.

Make that 18 goals in the English Premier League for the Portugal superstar after he converted a penalty that he earned himself in a 3-0 victory over Brentford on Monday, Associated Press reported.

Ronaldo also had a goal disallowed at Old Trafford for a narrow offside as United saved one of its best performances of the season for its final home game. Bruno Fernandes and Raphael Varane — with his first in English football — were the other scorers.

The victory kept alive — at least mathematically — sixth-placed United’s chance of finishing in the top four and qualifying for next season’s Champions League.

United, though, has only two games remaining and is five points behind fourth-placed Arsenal and three behind Tottenham, with both rivals still having four to play.

Ronaldo, who has netted in each of his last four games, is third on the league’s list of top scorers behind Liverpool’s Mohamed Salah (22) and Tottenham’s Son Heung-min (19).

And he’ll be back again next season, unlike some of the other players in United’s team.

United fans gave standing ovations to departing veterans Nemanja Matic and Juan Mata as they were substituted on their final Old Trafford appearances. It was also the last home game in charge for interim manager Ralf Rangnick, who will be replaced by Erik ten Hag during the offseason.

Monday marked a year since the postponement of United’s home match against Liverpool, when fans made clear their anger at the ownership of the Glazer family in the wake of the European Super League debacle.

Supporters have protested at each of United’s final three home games and the anti-Glazer sentiment was apparent before and during the victory against Brentford.

It was the first match that Brentford had lost with Christian Eriksen in the team and he pulled the strings in the London club’s first competitive match at Old Trafford since 1975.

Anthony Elanga set the first goal in the ninth minute, scampering down the right and crossing for Fernandes to volley home.

Ronaldo was proving a handful, forcing David Raya into an awkward save from a long-range free kick, then furiously claiming he should have had a penalty following Mads Bech Sorensen’s challenge.

Then Ronaldo smartly flicked a pass into Mata, who lashed narrowly wide of the near post on his first Premier League start of the season. The roles were reversed when Mata broke down the left and sent a low cross that Ronaldo squeezed past Raya. The provider and scorer celebrated together, only for the goal to be ruled out following a VAR review.

United created breathing space in the 61st minute when Ronaldo was bundled over in the box by Rico Henry before sending Raya the wrong way in front of an elated Stretford End.

Ahead of the final goal, Pontus Jansson nearly turned a cross from Ronaldo into his own goal but it went behind for a corner. Telles swung it in and Varane hooked home the ball via a minor deflection.