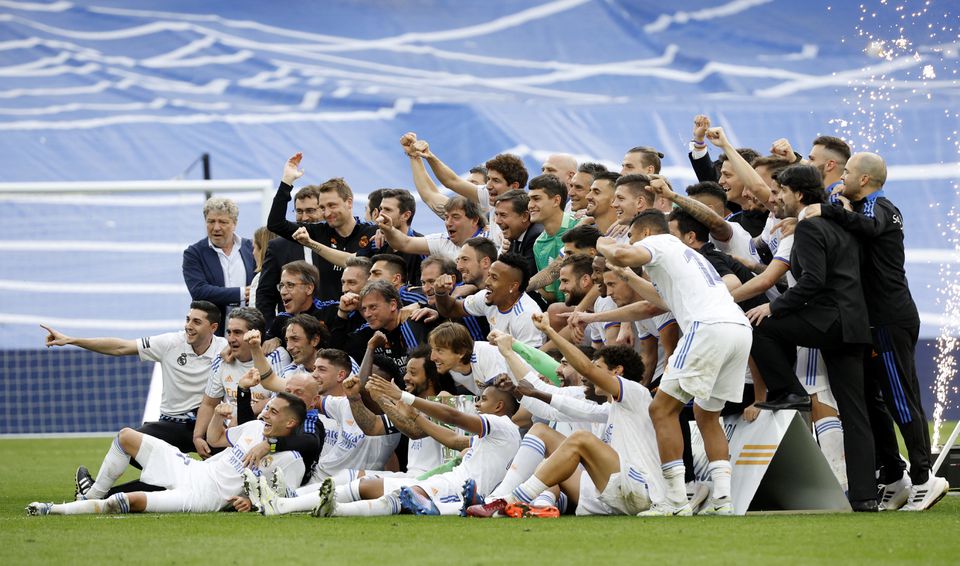 Real Madrid claimed a record-extending 35th LaLiga title on Saturday after two first-half goals from Rodrygo spurred them to a 4-0 thrashing of mid-table Espanyol in front of the jubilant home fans at a packed Santiago Bernabeu stadium, Reuters reported.

The win also made their Italian coach Carlo Ancelotti the first manager to capture titles in each of Europe’s top five leagues — England, Spain, Germany, Italy and France.

Rodrygo’s double put Real 2-0 up at the break before Marco Asensio added a third after 55 minutes and LaLiga top scorer Karim Benzema sealed the points in the 81st.

Captain Benzema lifted the trophy after coming off the bench late in the second half as Ancelotti rested several regular starters with Real hosting Manchester City in their Champions League semi-final second leg on Wednesday trailing 4-3.

Real have 81 points with four games to go. They are 17 points ahead of second-placed Sevilla and 18 clear of Barcelona, who have a game in hand, and needed a point against Espanyol to clinch the title with almost a month of the season remaining.

It was a record-breaking day for defender Marcelo, who won his 24th piece of silverware with Real to leapfrog Gento as the player with the most trophy wins in the club’s 120-year history.

“It’s an immense joy,” an emotional Marcelo told reporters in what is set to be the last of the 33-year-old’s 16 seasons at the Spanish club.

“We have won as early as possible, and that is everyone’s job to be celebrated”, Marcelo added, with the players looking towards the clash with Manchester City next week.

“Today we have to celebrate, but we have an important game ahead. If we do it right, there is nothing to worry about.”

Ancelotti believes the celebrations can help lift the players’ spirits to fight back against Pep Guardiola’s side.

“A celebration like this can bring an extra energy to the locker room, it can be good as another motivation facing such a difficult task against a great team,” Ancelotti said.

“The season has been spectacular. Lots of regularity. Consistency. I have to thank the players for their work and their attitude. Today we have to celebrate, not to talk. I want to celebrate.”

On Saturday, Real Madrid eased past lowly Espanyol even with goalkeeper Thibaut Courtois, midfield inspiration Luka Modric and Casemiro, playing as a defender, being the only three regulars playing from the start.

In the 33rd minute he received a fine pass from Marcelo and struck a delightful shot into the far corner beyond goalkeeper Diego Lopez.

Just before the break, he won the ball in the Espanyol half, shuffled the ball onto his right foot and hit a low shot into the left corner, wrongfooting the keeper.

Asensio extended the lead after the break with a close-range strike and than it was the turn of Benzema, who found space in the area to fire into the bottom corner from Rodrygo’s cross. It was the Frenchman’s 26th goal in 30 league games this term.

It was a display of dominance that earned Real a much deserved title in a historically dominant season.