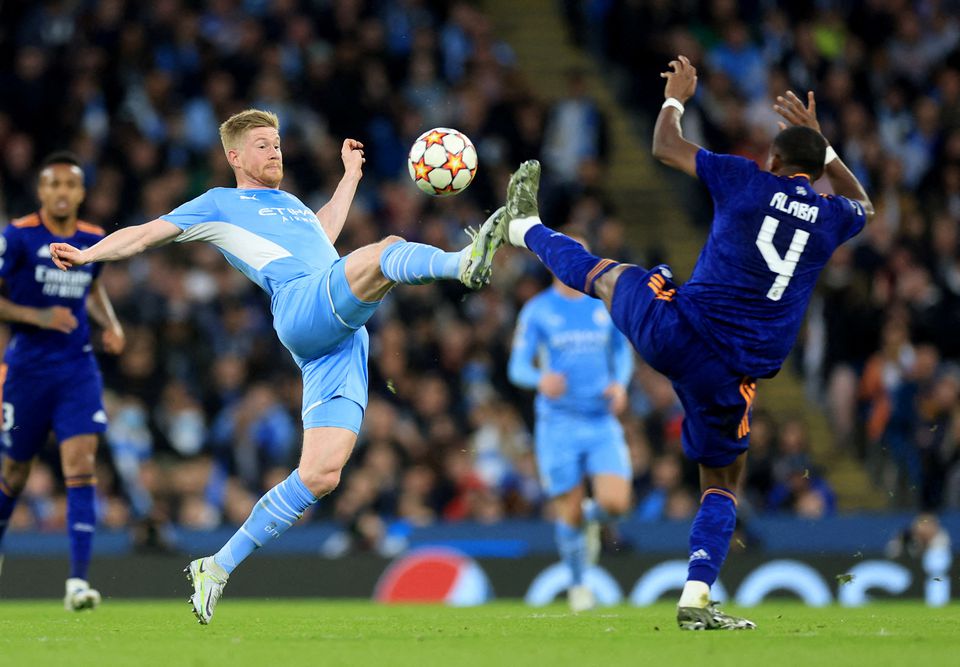 After one of the greatest of Champions League semi-final clashes, Manchester City will take a 4-3 lead into the second leg of their tie against Real Madrid following an extraordinary encounter at the Etihad Stadium on Tuesday, Reuters reported.

A breathtaking and relentlessly fast game, packed with chances, moments of individual brilliance and a smattering of defensive lapses, was a treat for the spectators but leaves City, who had the better of the game, with the slenderest of leads to defend at the Santiago Bernabeu next Wednesday.

“It was a fantastic game for both sides. We did many good things. Unfortunately we conceded goals and we could not score more. But it is two games and we have another one in one week,” said City manager Pep Guardiola.

Liverpool and Villarreal will certainly struggle to match the quality of this game when they meet in the other semi-final at Anfield on Wednesday.

City took the lead after 94 seconds, the fastest goal scored in a Champions League semi-final, with Kevin De Bruyne’s superb diving header after Riyad Mahrez made a piercing run at the Real defence, switched inside and then delivered a killer cross.

Guardiola’s side doubled their lead in the 11th minute through the in-form Gabriel Jesus, who scored four goals in the Premier League at the weekend, collecting a pass from De Bruyne and spinning away from David Alaba before drilling home.

It was the first time that 13-times European champions Real had conceded two goals so quickly in the Champions League and another looked on the cards.

It was a spell of the game that City may yet look back on as a missed opportunity and as so often Real found a way to get themselves back in a contest that risked running away from them.

The goal came via a familiar source, the Champions League’s escape artist Karim Benzema scoring a goal out of nothing as he guided a Ferland Mendy cross into the far, bottom corner with the most delicate of steers after 33 minutes.

Guardiola could be forgiven for wondering how his team’s high-energy, high-quality football had only produced a 2-1 lead at the break but there was a similar pattern in the second half.

City restored a two-goal advantage eight minutes after the restart with veteran Fernandinho, on as a substitute for the injured John Stones, picking out Foden with a perfectly weighted cross which the England international nodded home.

Two minutes later though Fernandinho was caught out as he allowed Brazilian compatriot Vinicius Jr to break away past him on the touchline.

The winger sprinted from the halfway line deep into the area before poking the ball past Ederson to make it 3-2 with an outstanding individual effort.

Yet again City found a way through. Real’s defence hesitated after Oleksandr Zinchenko went down on the edge of the box but Bernardo Silva pounced and beat Thibaut Courtois with a superb drive into the top corner in the 74th minute.

There was more drama to come as City’s Aymeric Laporte was penalised when the ball struck his arm in the area, after glancing off his head, and Benzema converted the penalty with a cheeky ‘Panenka’ chip down the middle eight minutes from time.

Still City searched for more but substitute Raheem Sterling and Ruben Dias were both unable to make contact with a dangerous ball across the box and then Dias slid in again and was just inches away from a deep Mahrez cross.

The score was to remain 4-3 but for those who wished this game could have just gone on and on there is another 90 minutes to look forward to next week.

City, yet to be crowned European champions, were left with the strange feeling of disappointment at ‘only’ beating Real by one goal.

Real’s Italian coach Carlo Ancelotti had similar mixed feelings to Guardiola after an entertaining night and left with some regrets but there was a hint of optimism in his analysis.

“As a football fan, it was a fantastic game of football. As a manager of Madrid, I have to take into consideration that we … conceded two goals very early. But we take three goals to the Bernabeu. We now hope to get to the final.”