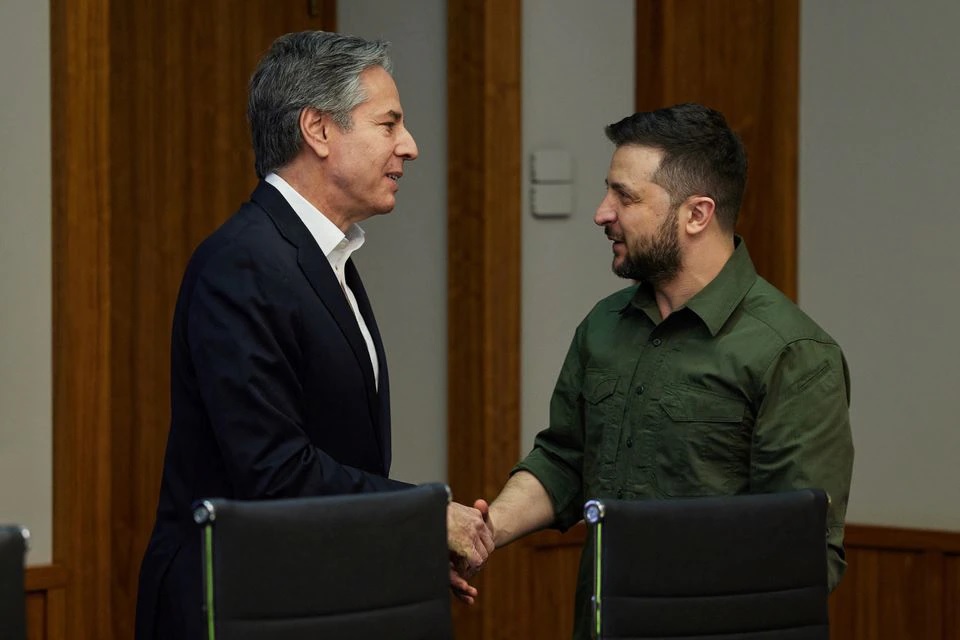 The United States promised on Monday to reopen its embassy in Kyiv soon, as Defence Secretary Lloyd Austin and Secretary of State Antony Blinken visited Ukraine’s capital and hailed its success so far against Russia’s invasion, Reuters reported.

Both men said the fact they were able to come to Kyiv was proof of Ukraine’s tenacity in forcing Moscow to abandon an assault on the capital last month, and promised more aid to fend off Russian troops now attempting an advance in the east.

“What you’ve done in repelling the Russians in the battle of Kyiv is extraordinary and inspiring quite frankly to the rest of the world,” Austin told President Volodymyr Zelenskiy at a meeting overnight, after a train journey from Poland. “We are here to support you in any way possible.”

Said Blinken: “The reason we’re back is because of you, because of the extraordinary courage, leadership and success that you’ve had in pushing back this horrific Russian aggression.”

U.S. officials said they pledged new assistance worth $713 million for Zelenskiy’s government and other countries in the region. An extra $322 million in military aid for Ukraine would take total U.S. security assistance since the invasion to about $3.7 billion, one official said.

“It will provide support for capabilities Ukraine needs, especially the fight in the Donbas,” the official said. It would also help Ukraine’s armed forces transition to more advanced weapons and air defense systems — essentially NATO capable systems, the official added on condition of anonymity.

Western arms for Ukraine have infuriated Moscow. Russia’s ambassador in Washington said Moscow had sent a diplomatic note stressing “the unacceptability of this situation when the United States of America pours weapons into Ukraine, and we demanded an end to this practice”.

The meeting between the U.S. delegation and Ukraine’s leaders ran for three hours, or more than double the allotted time, a U.S. official said.

“In terms of Russia’s war aims, Russia has already failed and Ukraine has already succeeded,” Blinken told a briefing in Poland after the two officials returned.

Russia has always denied intending to overthrow Ukraine’s government. Western countries say that was its aim from the outset but it failed in the face of Ukrainian resistance.

Just weeks ago, Kyiv was a frontline city under curfew and bombardment, with tens of thousands of Russian troops massing on its northern outskirts. Residents spent nights huddled in its metro stations, sheltering from artillery.

Today, the nearest Russian troops are hundreds of miles away, normal life is returning to the capital, Western leaders have been visiting and countries are reopening their embassies.

Blinken said U.S. diplomats would first return to Lviv in the west and should be back in Kyiv within weeks.

But despite Ukraine having repelled the assault on Kyiv, the war is far from over. Russia has regrouped its forces and sent more troops in to eastern Ukraine. Last week it launched a massive assault there in an attempt to capture eastern provinces known as the Donbas.

Five railway stations came under fire in western and central Ukraine on Monday, causing an unspecified number of casualties, Ukrainian television quoted state-run Ukrainian Railways as saying. Oleksander Kamyshin, the company’s chief, said the attacks took place in the space of an hour.

All of the country was placed under an unusually long air raid warning for two hours on Monday morning.

Across the border in Russia’s Bryansk region near eastern Ukraine, authorities were battling a huge blaze at an oil depot. There was no immediate indication that the fire was connected to the war, but Russia accused Ukraine of a helicopter attack in that area last week.

Before the U.S. officials’ visit, Ukraine had drawn up a list of weapons urgently needed from the United States, such as anti-missile systems, anti-aircraft systems, armoured vehicles and tanks, Zelenskiy aide Igor Zhovkva told NBC News on Sunday.

The United States and NATO allies have shown growing readiness to supply heavier equipment and more advanced weapons systems. Britain has promised to send military vehicles and is considering supplying British tanks to Poland to free up Warsaw’s Russian-designed T-72s for Ukraine.

In a daily update on the conflict, Britain’s defence ministry said Russia had only made minor advances in some parts of Donbas.

“Without sufficient logistical and combat support enablers in place, Russia has yet to achieve a significant breakthrough,” it said.

In an emotional address at Kyiv’s 1,000-year-old Saint Sophia Cathedral to mark the Orthodox Christian Easter on Sunday, Zelenskiy said his nation would overcome “dark times”.

The relative calm in Kyiv is a contrast with the south and east of the country, where the war grinds on relentlessly.

Some 320 km (200 miles) southeast of Kyiv, Russian missile strikes on an oil refinery and power plant in Kremenchuk killed one person and wounded seven, the governor of the Poltava region said. Moscow said it had destroyed oil production facilities there.

Ukraine’s general staff described Russian shelling and assaults along most of the front in the east, including missile and bomb attacks on a huge steel works in Mariupol where the last Ukrainian defenders are holed up in a city destroyed during two months of Russian siege and bombardment.

Moscow, which describes its actions in Ukraine as a “special military operation”, denies targeting civilians.