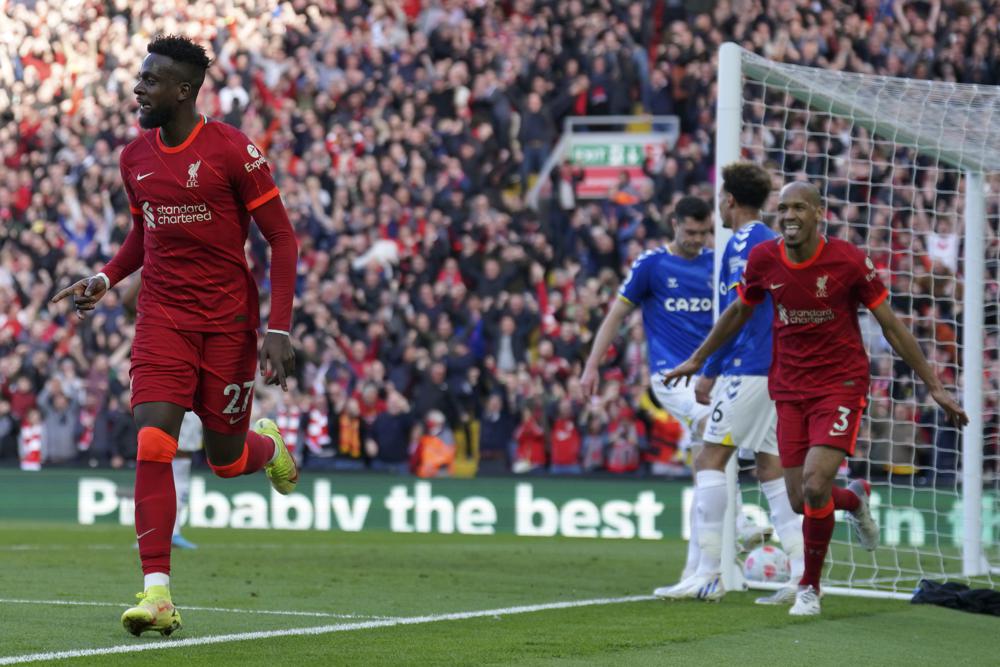 Staying in the slipstream of Manchester City in the Premier League title race wasn’t Liverpool’s only cause for celebration following victory in another fast and furious Merseyside derby, Associated Press reported.

Liverpool’s 2-0 win at Anfield on Sunday also dumped Everton into the relegation zone, leaving its neighbor’s 68-year stay in England’s top flight in major doubt with a month left of the season.

Second-half goals by Andrew Robertson and Divock Origi were enough for Liverpool in a match that ended with the jubilant home fans singing “Going down, going down” to their rivals from across Stanley Park.

Completing a dismal day for Everton was relegation rival Burnley winning a second straight game since firing its long-serving manager Sean Dyche, 1-0 at home to Wolverhampton.

It left Everton in third-to-last place and two points below Burnley, which finally climbed out of the relegation zone.

Everton, which has been in the top division every year since the 1954-55 season, has played one game less than Burnley but has a tough run-in featuring games against Chelsea, Arsenal and in-form Brentford.

More importantly for Liverpool, the team returned to being a point behind City with five games left in a title race that seems destined to go to the final weekend.

In other games, Chelsea scored in the 90th minute through Christian Pulisic to beat West Ham 1-0 and cement third place, five points clear of Arsenal in fourth. Brighton drew 2-2 at home to Southampton.

Everton’s desperation to avoid another morale-sapping defeat on the road saw the team take gamesmanship to new levels, clearly an approach from manager Frank Lampard that could have come straight out of the playbook of a former mentor. Jose Mourinho famously came to Anfield in 2014 with Chelsea and secured a win that derailed the Reds’ title bid.

Everton couldn’t quite match that but still frustrated Liverpool and the home fans, making for something of an old-school derby feel as tackles flew in, players squared up to each other and even the managers exchanged words.

“The game plan was understanding they are one of the best teams in the world, with what they are doing to other teams recently,” Lampard said, perhaps a nod to Liverpool’s 4-0 mauling of Manchester United on Tuesday.

The arrival of Origi — mostly overlooked this season — as a substitute on the hour mark proved decisive, with his game-changing performance adding to his derby legacy.

He played a part in Robertson’s goal, a header from Mohamed Salah’s clever cross, and then finished things off with a close-range header five minutes from time for his sixth goal in nine derbies.

Liverpool’s quadruple chase rolls onto Wednesday, when it hosts Villarreal in the first leg of the Champions League semifinals.

Everton, meanwhile, has six games to save its season.

Since ending Dyche’s nine-year spell as manager, Burnley has looked a different team by attacking more and even moved away from its tried-and-tested 4-4-2 formation against Wolves, instead playing three up front.

Two of the strikers combined for the goal, Weghorst crossing for Matej Vydra to score in the 62nd.

Burnley is now just two points behind Leeds, which plays Crystal Palace on Monday and has been sucked back into relegation danger.

“Just from getting these results, I think psychologically for the group what they’ve achieved this week will help them, will bring them together even more,” said interim manager Mike Jackson, who was unsure whether he’ll still be in charge for next weekend’s huge match at next-to-last Watford.

Pulisic might be about to get some more game time at Chelsea.

Chelsea manager Thomas Tuchel has preferred a front three of Timo Werner and Mason Mount either side of Kai Havertz in recent weeks, saying Pulisic had “struggled a little bit” since coming back from the March international break when he had three matches with the United States.

“He struggled energy-wise, this was my impression, on and off the pitch,” Tuchel said. “It’s sometimes like this. Now we have tried to bring him back in full confidence from the bench and I am happy with the effort today.”

Pulisic converted a cross from Marcos Alonso to spare the blushes of teammate Jorginho, who struck a tame penalty at West Ham goalkeeper Lukasz Fabianksi in the 87th minute after his trademark hop-and-skip run-up.

Craig Dawson brought down Romelu Lukaku for the penalty and was eventually shown a red card after a VAR check.